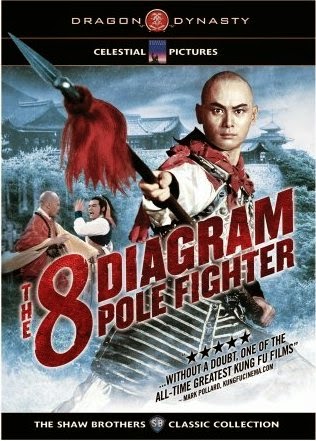 Steve and I each happened to include a martial arts film when we picked movies for each other.  I like these kinds of films, but I think Steve probably likes them slightly more than I do.  Eight Diagram Pole Fighter (don’t bother trying to figure out what the title means) is a traditional genre film from the legendary Shaw Brothers.  Rather than have any number of martial arts skills and weapons on display this one almost exclusively features fighting with lances.  There’s not a lot of plot – it’s a time honored tale of revenge – but there is plenty of fighting to watch.

The Yang family is targeted by General Pan Mei in order to gain influence with the Emperor.  The father and his seven sons face off against far greater numbers.  In fact, most of the fights consist of one of the brothers facing down dozens of enemy until he finally falls, then the next brother doing the same, and so on.  Only two of the sons survive – the fifth and the sixth.

The enemy uses a weapon with a prehensile section in it to wrap up the staff of the opposing person’s weapon, or to wrap around the arms/legs of the opponent.  I don’t recall ever seeing that in a movie before.  If it were a real weapon that could be used (I don’t know enough to tell if they were real) then it would be very useful.  It made for some interesting fights, much more so than two people whacking two poles together.

The sixth brother makes his way back home to his mother and two younger sisters.  The losses of his brothers and father in the battle have driven him mad, though.  He keeps trying to attack his own family.  His mother has to keep kicking his ass to keep him in check.

This movie ran into a problem when the actor playing the sixth brother died in a car accident.  His character was supposed to be the main one who would exact revenge for his family.  Instead the filmmakers shifted the attention to the fifth brother.

After encountering a loyal peasant who dies so that he can escape, the fifth brother decides to just leave the world behind.  He breaks the spear point off his lance and makes his way to a monastery.  When he gets there he’s about the least monk-like person that has probably ever been inside.  He demands that they make him a monk.  He threatens to kill anyone who gets in his way.  He ends up shaving his own head and burning himself in a mangled version of the ritual when someone becomes a monk.

Of course the elders there refuse to let him become one.  He insists on staying around anyway.  He wants to train with them, but they point out that he only knows how to kill, not to simply drive off the “wolves” that are attacking.

General Pan Mei knows at least one brother survived so he keeps coming around the family compound to try to find him.  Finally, one of the monks from the monastery comes to visit and drops hints that a second brother is alive back at his place.  The mother sends the elder of the two sisters to try to get the fifth brother to come back to testify against General Pan Mei in front of the Emperor.  Of course, Pan Mei waylays her and the fifth brother has to decide whether or not to give up the sort-of monkish ways he has been living and re-enter the world to help her.

The fifth brother (none of the Yangs had names, at least in the subtitles) is played by Chia-Hui Liu, the same man who starred in martial arts classic The 36th Chamber of Shaolin (1978).  The elder sister could kick a lot of ass, too.  I’m not sure who played her because the IMDB credits list them all by their proper names, but the subtitles only referred to her as “eighth sister”.  I think it might be Kara Hui because she is the top listed actress other than the one who played the mother.

There were several times I found myself laughing at what was happening onscreen, but I don’t think those scenes were supposed to be comedic.  When the sixth brother was home and acting mad, he was so over the top crazy that it was practically a parody.  And having his mother kick his ass each time was always amusing.  When the fifth brother was practically threatening to kill the monks if they didn’t make him one, too, that was also funny.  And there were a bunch of quick scenes at the end involving teeth that I couldn’t help but laugh at.  To say more would be a spoiler.

According to the trivia on IMDB this movie is loosely based on the legend of the Yang family where a real General Pan Mei wiped most of them out, the fifth brother became a monk, and the sixth brother is the one who exacted revenge.  The movie was going to show that, too, but as I mentioned the actor playing the sixth brother died during filming.

If you’re looking for a film that will change the way you look at your life, the world, or your career then this isn’t it.  On the other hand, if you’re looking for lots of insane, over the top martial arts action, then you will definitely find what you are looking for in Eight Diagram Pole Fighter.  If this sounds interesting then I recommend you give it a try.