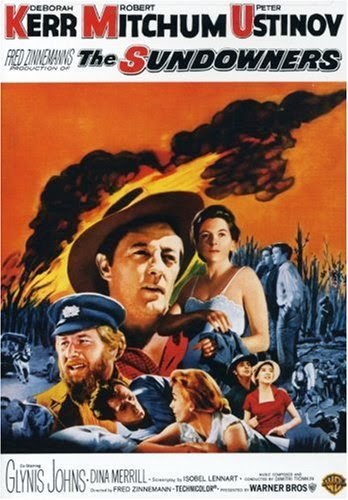 The Sundowners is based on the 1952 Jon Cleary novel of the same name.  There is also a 1950 American film of the same title, but it has nothing to do with either the novel or the 1960 film.  The story is set in the Australian outback in the 1920s.  The Carmody family are sheep drovers and they live in what is, for all intents and purposes, a covered wagon.  Change the sheep to cattle, and the setting to the American west in the 1800s and you’d have an instantly recognizable western.  Director Fred Zinneman had previously done High Noon (1953) and ! (1955), so he knew his way around the look and feel of the old west.


Paddy (Robert Mitchum) and Ida (Deborah Kerr) Carmody, along with their teenage son Sean (Michael Anderson, Jr.), are migrant workers traveling all over the Australian outback in a wagon that carries all their worldly possessions.  In the slang of the area they are “sundowners” – workers that never put down roots, instead just pitching a tent wherever they are when the sun goes down.  This way of life suits Paddy just fine.  If Ida had her way, though, they’d settle down at a little farm they stayed at one night.  It was for sale, but her argument with Paddy didn’t go very far because they didn’t have the money for a down payment.  Sean is like his mother; all he has ever known has been the inside of the wagon and he’d also like to settle down.

They meet an educated Englishman named Rupert Venneker (Peter Ustinov) on their travels.  He and Paddy are two of a kind – always wanting to be on the move and never settling down.  He joins up with them to help Paddy and Sean drive the latest herd of sheep to Cawndilla.  There’s a brush fire and other dangers on the way.  When they get there a local woman named Mrs. Firth sets her sights on Rupert and does everything she can to snare him.

Meanwhile, Ida has convinced Paddy to stay at the sheep station they arrived at.  He shears sheep, she keeps house, and Sean also does odd jobs.  Any Australian story that involves sheep seems to require a sheep shearing contest at some point and The Sundowners is no exception.  In this case it’s for enough money to be able to buy the farm.

Also in the film Paddy wins a horse while gambling, and with Sean as the jockey they enter him in races.  They win consistently and this is also an opportunity to get enough money to buy the farm.  Does Paddy really want to win, though, if it means doing what he hates and permanently setting down?  To the film’s credit, it leaves it mostly up to the interpretation of the viewer.

The Sundowners received five Oscar nominations: Best Picture, Best Director, Best Actress, Best Supporting Actress, and Best Adapted Screenplay, but it did not win any of them.  Despite the critical acclaim it did not do well at the box office.  Combine this with extensive problems shooting exteriors in the Australian outback and most people on the production did not consider this film a positive at the time.  By the way, a camera operator on the crew was future director Nicolas Roeg (Walkabout).

As you might expect with the Oscar nomination, Kerr does a good job in her mostly thankless role of a long-suffering woman married to a man who has wanderlust in his soul.  Mitchum, who was a last second replacement for Gary Cooper, does a good job as well, despite not receiving a nomination.  For me, the subplot with Rupert and Mrs. Firth could have been dropped and I wouldn’t have missed it.  I’m not sure why Johns received a Best Supporting Actress nomination.

Overall, this is a good, but not great film.  Someone must have loved it, though, because I used to see a car now and then with a license plate “SNDWNRS”.  If the movie sounds interesting, then I recommend you give it a try.

Email ThisBlogThis!Share to TwitterShare to FacebookShare to Pinterest
Labels: Movies, Movies – 1960s, Movies – 3 Stars, Movies – Based on Book, Movies – Westerns Not in the West