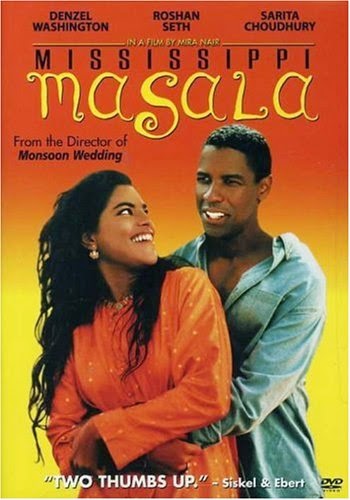 Mississippi Masala was made at a time after Denzel Washington had hit it big with 1989’s Glory, but while he still sometimes did a smaller film like The Mighty Quinn (1989), Devil in a Blue Dress (1995), and this one.  This was a lucky casting break for director Mira Nair (Monsoon Wedding) because her financial backers had pulled out after Ben Kingsley declined a role in the film.  Once signed on he was a big enough name to attract other backers and get the movie made.  This was a good thing because the film is now an interesting diversion from ’s better known big box office/action hero persona.


Nair had come to the attention of the movie world with her prior film Salaam Bombay! (1988), which was nominated for the Best Foreign Language Film Oscar.  After that success she and that film’s screenwriter Sooni Taraporevala started researching their next project, Mississippi Masala.  They spent a considerable amount of time in as well as the American South in order to get the details right.  They succeeded.

In the early 1900s a number of people from had gone to to help build a railroad.  After it was completed some of them stayed there and raised families.  They tended to be better off financially than the native Ugandans so when Dictator Idi Amin came to power in the early 1970s he ordered all of them out of the country.  They had to give up their homes and land.  One such family was father Jay (Roshan Sheth – Gandhi, Monsoon Wedding), mother Kinnu (Sharmila Tagore – the young bride in The World of Apu), and their daughter Meena (played as an adult by Sarita Choudhury in her film debut.)  It was the role of the father that Kingsley was originally going to play.

Fast forward to the present (1990) and this family has eventually moved to be with relatives living in the southern state of in the .  These relatives own a motel and the family stays there.  In return Meena works at the motel as a maid, cleaning rooms.  Jay still dreams of one day being able to return to and reclaim his land and fortune.  In the meantime, the years have made him bitterly hate not just Idi Amin and his “ for Africans” movement, but all black people in general.  His quest to return to Uganda forms a sizable subplot in the film, perhaps as a remnant of the role’s importance being set higher when Kingsley was going to be cast.

Entering into this picture is Demetrius Williams (), a black man who runs his own carpet cleaning business.  He is hired to clean the carpets in the motel and naturally he and Meena continue to run into each other.  A flirtation grows and the two finally start to date, but in secret lest her father ever find out.  He does, of course, and the phrase “conniption fit” is probably a mild one to describe his reaction.

Unfortunately for Demetrius and Meena, who are now in love with each other, it’s not just her father that has a problem with it.  Demetrius’ father (Joe Seneca) and brother (Charles S. Dutton) also want nothing to do with Meena.  The combined pressures of the two families may just force Demetrius and Meena to do something desperate to protect their love.

Washington and Choudhury have some good chemistry together and Nair used the opportunity of shooting in to include at least one intimate scene that likely would never have been allowed in at the time the film was made.  For those that don’t know, the term “masala” means a mix of spices and it is often associated with Indian cooking.  For the purposes of this film it’s the mixing of the different races and the spicy nature of their relationship.  Despite the film’s R rating there is nothing graphic in it, though.  It’s just another example of the MPAA over-reacting to the races of the people in the sex scene. (See the documentary This Film Is Not Yet Rated for much more on the hypocrisy of the MPAA.)

The financial backers actually did try to get Nair to replace the two leads with white actors, despite the fact that it would have rendered pointless the entire story about an Indian family with roots in whose father had an even deeper reason to hate a black man than just simple racism.

In regards to the interracial aspect of their relationship I honestly can’t think of a single other film that features a black/Indian couple, of either gender configuration.  This might make this movie unique.

In addition to the praise she earned for Mississippi Masala, Nair received something even better: she met her second (and current) husband while in researching this film.  He was a third generation Ugandan Indian man, much like the family depicted in the movie.  The film is not his story, though; he had left to teach in the before Amin came to power.

There are a couple of interesting things at the end of the credits, if you’re like me and watch the entire film.  The first is that the phrase “hakuna matata” appears – three years before The Lion King would be released.  The second is that Washington and Choudhury pose together in “traditional” (i.e. African and Indian) attire.

Mississippi Masala isn’t a perfect film.  Those looking for everything to be wrapped up in a nice, neat package may not like this movie.  Anyone who is a fan of Denzel Washington’s “more acting, less gunshots” subset of films should probably check this out.  For everyone else, if it sounds interesting then I recommend you give it a try.