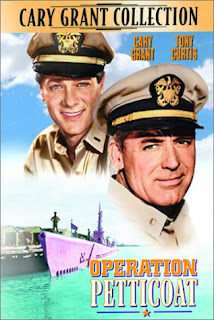 When most people hear “submarine movie” they probably think of intense war films, edge of your seat tension, battle scenes, etc.  Not all films in this genre have been ultra-serious, though.  Now and then people have decided to have a little fun with the situations that could arise on a submarine.  For instance, what would happen if some nurses had to seek safe passage onboard a submarine during WWII?  Imagine the funny issues that could arise.  Operation Petticoat tackled that story and as a reward it received an Oscar nomination for Best Original Screenplay.  It was also the first big film of director Blake Edwards' career.

The movie stars Cary Grant and Tony Curtis.  That same year (1959) Curtis also co-starred in Some Like It Hot where among other things he does a dead on impersonation of Grant.  I don’t know which movie was shot before the other, but if he did Operation Petticoat first then Curtis got a great chance to study Grant’s speech and mannerisms for Some Like It Hot.  One other Curtis connection: this film spawned a short-lived TV show of the same name in the late 1970s.  Its cast included Curtis’ daughter Jamie Lee Curtis in her first real acting gig.

Operation Petticoat (the movie) opens in the present with Rear Admiral Matt Sherman (Grant) presiding over a ceremony for the decommissioning of the U.S.S. Sea Tiger, a submarine he commanded during WWII.  He goes onboard to look around and finds his old log.  The film then flashes back to December of 1941.

The U.S.S. Sea Tiger is docked at a Navy Yard in the .  The Japanese attack there just like they did at a couple days earlier.  The Sea Tiger ends up being sunk beside the pier.  Lt. Commander Sherman is given orders to get it back afloat and try to fall back to to await orders.  While repairs are going on he is assigned a new officer, Lt. Holden (Curtis).  It’s obvious that the man knows nothing about submarine operations.  He is only in the Navy because he wanted to wear the dress whites and find himself a rich wife with his charm and looks.

At first doesn’t know what to do with him, but when Holden quickly reveals himself to be a conman and scavenger of the first order, makes him the Chief Supply Officer.  Since everyone needs the same things, the Sea Tiger has been getting passed over a lot.  Holden takes a few men with him and “acquires” many of the necessary pieces of equipment.  is uncomfortable with this, but also knows a war has just started and he needs a working sub as quickly as possible.

Much of the humor in the film comes from the straight-laced Commander Sherman being placed in situations where he is made uncomfortable in having to deal with extraordinary things, whether it is Holden’s illegal scavenging, having to write a letter complaining about a lack of toilet paper, or, yes, having women onboard his submarine.

Once the Sea Tiger gets underway they encounter five Army nurses who have been stranded by the Japanese attacks.  Lt. Holden brings them to the sub and convinces Cmdr. Sherman that the only decent thing to do is give them passage to a safe location.  One of the nurses is Lt. Duran (Barbara Merrill) and she and Holden have an immediate attraction to each other.  Another nurse is Lt. Crandall (Joan O’Brien) and let’s just say that she puts all the other nurses to shame in one particular area.  In fact, when Barbara Merrill was first auditioning it was for the role of Lt. Crandall.  She told the filmmakers that she didn’t feel she had the “qualifications” for the part and suggested Joan O’Brien to them.  Both of them ended up getting cast.

Cmdr. Sherman is immediately ill at ease with these five women being in close proximity to his men.  As he tries to delicately explain to the ranking nurse Major Heywood (Virginia Gregg), “With you women being women, and my men, that is to say my crew, being men, well…this is outside the usual submarine operations.”  With a small smile she says, “We are well acquainted with the facts of life Commander.”  replies, “So are my men.  It’s any exchange of information that I am trying to avoid.”

Another situation where is immediately put in discomfort is that the passageways are barely wide enough for a man to walk down.  When two meet they need to turn sideways to fit past each other.  almost immediately encounters the bounteous Lt. Crandall.  They turn sideways and he can barely fit by her without his chest touching hers.  Right after him come several more men who encounter the same “problem”.  issues an order that Lt. Crandall be given “a wide berth” in all passageways.

Major Heywood immediately starts to irritate the engine room Chief because she sets up shop there and it soon turns out she’s damn good at thinking outside the box in regards to repairing and keeping the engines running.  One solution that the Chief declares “just ain’t right” is when she uses a girdle in place of a broken spring.

Cmdr. Sherman can’t catch a break.  When the sub arrives at an Army base they refuse to take the nurses because they are preparing for an imminent attack by the Japanese.  The Sea Tiger continues south with the nurses and docks at another site for New Year’s Eve.  They never have had a chance to paint the sub after repairs so Holden scrounges, but even all he can find for the primer coat is some red paint and some white paint – neither enough to cover the sub.  They mix them together and paint the sub with that, which results in a pink submarine.  They have the gray paint they need, so they figure it’s just going to be pink for a day.  The Japanese attack that evening, though, and they are forced to put to sea – a pink submarine with women onboard and no way to communicate their situation.

The Japanese get word of the pink submarine and they get made fun of by Tokyo Rose.  The Americans, thinking this is some kind of Japanese trick because they figure no real American submarine would be painted pink, give orders to find her and sink her.  It’s not long before the U.S.S. Sea Tiger is dodging depth charges and trying to figure out how to let the Americans know they are one of theirs.  The solution is a unique one and well in keeping with the overall tone of the film.

Is Operation Petticoat a must see movie like Das Boot?  No, but it is a fun, light hearted romp with witty lines and some comedy gold from both Tony Curtis and Cary Grant.  You can also watch for some other familiar faces like Gavin MacLeod (The Mary Tyler Moore Show, Love Boat), Marion Ross (Mrs. Cunningham on Happy Days), and Dick Sargent (Bewitched.)  If this sounds like a fun movie to you then I recommend you give it a try.


Here is a clip of the arrival of the nurses: