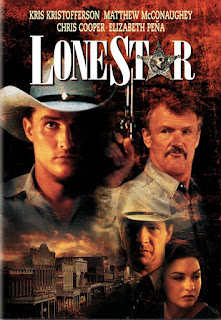 Back in 1996 Lone Star was my first exposure to writer/director John Sayles.  Even though I had heard of some other films of his like The Brother from Another Planet (1984) and Eight Men Out (1988), I had not seen them.  (Still haven’t, actually.)  Sayles’ critics, much like Kevin Smith’s, complain that he is a better writer than he is a director.  I say give me an engaging story any day, rather than a bunch of “look at me, I’m an artiste!” camera movements.  In fact, the screenplay for Lone Star received numerous nominations, including ones for the WGAs, Golden Globes, BAFTAs, and Academy Awards.  This film also happens to be the first one in which I ever saw Matthew McConaughey.  It is a well-written story of parent/child relations, white, latino, and black relations, and the legacy of a man vs. the reality of that man, all wrapped in a 40 year old mystery story.

Sam Deeds (Chris Cooper – American Beauty, Adaptation) is the sheriff of , , which is on the border with .  He’s almost an afterthought in the area, though, because he is living in the enormous shadow of his father.  Buddy Deeds (McConaughey in flashback) was the much beloved sheriff for decades.  After his death Sam got the job, but most people look at him as someone just riding on his father’s coattails and nowhere near the man his father was.  Sam might even partially believe it himself.  He puts up with all the hero adulation his late father receives despite the fact that the man was far from a hero to his own son.

When he was young Sam found out that his father Buddy was cheating on his mother.  Buddy was distant, seeming to want to spend all his time with the people in the county who loved him rather than his own family.  When Sam was in his teens he fell in love with a local latino girl named Pilar, but Buddy opposed the relationship and forbade his son from seeing her.  Now in the present, Mayor Hollis Pogue (Clifton James) and local businesswoman Mercedes Cruz (Miriam Colon) are dedicating a plaque commemorating the area’s love for Buddy.  Mercedes just so happens to be the mother of the girl Sam loved as a teenager.  Because of the dedication he reconnects with Pilar (Elizabeth Pena playing far more than a generic latino woman).  She also had a tough time as a teen because her mother opposed the relationship just as much as Sam’s father did.  Even though Buddy is dead, Mercedes is still around so Sam and Pilar try to keep their rekindled romance a secret.

Things are about to get a lot more complicated.  A military officer (Joe Morton) comes to town to decommission a local military base.  He was sent because he is originally from the area.  His father is Otis (Ron Canada), the man who runs the local bar.  The son sees his father as embarrassing and would have preferred if someone else had been sent.  He soon has a good excuse to do other things – a skeleton is found in the desert during the decommissioning work.  The only clue to who it might be (this was before DNA testing was commonplace) is a Masonic ring on one finger.  Oh, there’s one other clue – a sheriff’s badge.

This opens up a story that the older residents in the town have tried to forget.  About forty years earlier, prior to Buddy becoming sheriff, he was a young deputy to the corrupt and very racist sheriff Charlie Wade (Kris Kristofferson).  One day Wade just disappeared.  It was said that he stole a bunch of money he had extorted from local businesspeople and he went to .  If this is his body then he didn’t run off; he was murdered.  Who did it and what happened to all the money?

Sam tries to interview the older townspeople like Hollis, Otis and Mercedes, but they all are reluctant to talk about the events back then.  We see in flashback many examples of Wade’s cruelty to most anyone, as well as how the young Buddy tried to temper Wade’s extremism.  Sam feels he’s being stonewalled and he seriously begins to wonder if his father, the beloved sheriff, was actually the man who murdered Wade and stole the money.  No one else wants to believe it, and maybe, just maybe, Sam is far more willing to believe it only because of his own strained relationship with the man everyone seems to love more than he did.

Lone Star is certainly not an action movie, but it has good tension and a great mystery.  I would describe the pace as “measured” and that is part of what makes this such a great story.  Everything we need to know is shown to us, although we may not realize we need to know it at the time we see it.  There are no wasted scenes where I was wishing the movie would return to the “real story”.  The interconnections of the older generation to the younger generation, as well as Sam and Pilar’s relationship, all feel very much a part of the story.  By the time the film ends we discover that everything we have seen does indeed connect in some way to what happened forty years before.  The movie is a little over two hours long, but I would not cut a thing out of it.

Only people who have to have tons of action should skip this movie.  It has good performances, especially from Cooper and Pena, and it has a great story with many interconnected pieces.  I highly recommend this film.  By the way, I’ve convinced myself.  It’s been a few years since I last saw this so I’m going to take the DVD off my shelf and watch it again.

I could not find any film clips of Matthew McConaughey in Lone Star, so I am including the trailer for the film, which shows you what he looked like in it.