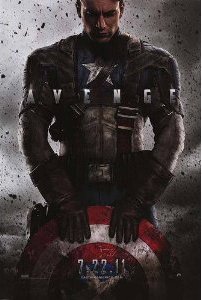 Captain is the last of the movies Marvel Studios is releasing prior to next May’s Avengers movie.  This movie introduces the last major character for the coming film.  Captain : The First Avenger has something that none of the other lead in movies had – an honest to God hero.  This is a big, old-fashioned superhero movie, one where the good guy is actually worthy of being called a hero.

Most superhero movies nowadays have “heroes” that are either “dark” (Batman, Daredevil), narcissistic (Ironman, Thor, Green Lantern), “woe is me” (Spider-Man, X-Men, Hulk), or just plain goofy (Fantastic Four.)  Don’t get me wrong; those can still be entertaining.  In fact, Spider-Man 2 is probably the best traditional superhero movie ever made.  It’s just that it gets tiring seeing movie after movie where the supposed hero is sometimes a jerk, or a goofball, or not much better than the criminal he’s trying to stop.  Finding an actual hero in a superhero film has been almost impossible.  The exception is Captain , and that’s why it is a very good movie.

The film is set mostly during World War II.  For those who know the stories from the comics, the movie does pull a lot of material from them.  It sticks pretty close to Captain ’s origin, his main villain, and many supporting characters.  It was fun to see some of the Howling Commandos from another Marvel WWII comic show up in the movie.  Bucky also appears, but he is a lifelong friend of Roger’s, not a child sidekick.  For real comic book geeks (you know who you are) they even have Captain ’s original shield, the one he had before getting the circular one.  There’s also a nod to the not so good TV series where Cap rides a motorcycle with his shield on the front of the bike.

For those who know nothing about the character, here is the premise of the movie.  Steve Rogers, played by Chris Evans in his seventh film based on a comic, is the proverbial 95 pound weakling.  He keeps trying to enlist in the Army during World War II, but keeps getting denied because of his lack of physique, as well as a bad history of illnesses.  He finally gets invited to participate in a “super soldier” program designed to create the next generation of fighting man.  Through the use of science he is transformed into a peak physical human being.  At first he is used only as a symbol to help the war effort, but once he finally proves himself he gets to go into combat to stop the main villain – the Red Skull, played by Hugo Weaving (The Lord of the Rings, The Matrix.)  Also appearing in the movie is Tommy Lee Jones as the man in charge of the program.  Hayley Atwell plays a British agent who is attached to the program for no reason I could see other than to be a potential love interest for Captain .

This movie does tie into the continuity of the other pre-Avengers movies.  The Red Skull acquires the Cosmic Cube, a source of unlimited power.  It first appeared in the after-credits scene of Thor.  It is also mentioned that it comes “from the gods” (i.e. the Asgardians in Thor.)  The Incredible Hulk movie had made reference to a “super soldier” program that had been tried before.  Iron Man and Iron Man 2 had glimpses of Captain ’s shield (copies of it, actually.)  Howard Stark, the father of Tony Stark (Ironman), plays a supporting role in Captain and is the man who develops the familiar shield that Cap uses.

Like most of the other movies, Captain also has an extra scene after the credits that introduces something from the next movie, so stick around to see it.

What didn’t work with the movie?  I had some small quibbles, but nothing major.  There were some things that could happen now, but would not have happened in that time period (i.e. blacks and whites serving in the same platoon, a woman going into a combat operation, etc.)  There were a couple of “dames” thrown in, but for the most part the dialogue used the politically correct “women.”  Officers and enlisted men fraternized with each other.  Some of the attempts at humor didn’t work.  There was a funny reference to Raiders of the Lost Ark, though.

Chris Evans looks every inch the hero (which is probably why he has been in so many comic book movies.)  The cgi that made him appear small and scrawny was very well done.  His acting is passable in this movie.  Tommy Lee Jones does his usual gruff, tough guy, a role he could play in his sleep.

One warning for parents of young children – the violence in the movie pushes the boundaries of a PG-13 rating.  It’s wartime and Captain is first and foremost a soldier.  He kills a number of enemy soldiers and sometimes uses a gun to do it.  There is also a scene where a bad soldier ends up getting shredded by a plane propeller.  Usually the difference between a PG-13 movie and an R movie is that the PG-13 one shows the same violence, but without any blood.  When the soldier goes through the propeller you briefly see lots of blood.

On the plus side, Steve Rogers is a great example for kids.  Long before he ever had a great physique he was a genuinely good person.  My favorite scene in the movie might be his response to a grenade being thrown amongst him and the other recruits.  It shows there is the heart of a hero beating in that scrawny little body.

Overall, this is a very good movie.  It’s definitely better than Thor and Green Lantern.  It’s tough to say if it’s better than X-Men: First Class, but it’s certainly no worse.  I highly recommend this movie.