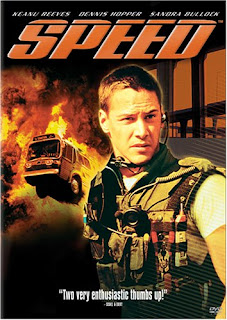 Speed is, quite simply, one of the best action movies ever made.  It also made Sandra Bullock a star and cemented Keanu Reeves as an action hero.  Part of what made the movie so great was that the concept was so simple.  There’s a bomb on a bus.  Once the bus reaches 50 miles per hour the bomb arms.  When the bus drops below 50 miles per hour the bomb explodes.  They even put this in the trailers and it immediately grabbed people’s attention – because the bus is in , famous for its traffic jams.  How can you possibly keep a bus going 50 miles an hour in and around ?

I saw the movie opening day.  It was so good that I went again a week later with a friend who wanted to see it.  I almost never see a movie twice in the theater.  Terminator 2 and The Empire Strikes Back are the only other movies I can think of where I did that.

I remember being surprised that the bus sequence, while still being the major part of the movie, was the middle of three action sequences.  The movie opens with the bomber having trapped some people in an elevator.  It ends with a sequence on a subway train.

Joss Whedon provided an uncredited re-write on the script.  I don’t know what parts he added specifically, but there are several lines spoken by Sandra Bullock’s character that sound like him.

I mentioned what the movie did for Sandra Bullock’s and Keanu Reeves’ career.  I recognized Bullock from having seen her in Love Potion Number 9 and the Sylvester Stallone sci-fi action flick Demolition Man, but to many people who saw Speed she was completely new.  She followed this action flick with the romantic comedy While You Were Sleeping, and this started the transition of the “’s Sweetheart” title from Meg Ryan to her.

Reeves had done an action flick before this one – Point Break - but most people still saw him as Ted from the comedy Bill and Ted’s Excellent Adventure.  He would follow Speed five years later with a little movie called The Matrix.

Dennis Hopper also appears as the bad guy, playing a psycho role that he fell into later in his acting life (see 1986’s Blue Velvet.)

The director, Jan de Bont, appeared to come out of nowhere.  In actuality he had been around for years as the Director of Photography for such movies as Die Hard, The Hunt for Red October, Basic Instinct, and Lethal Weapon 3.  He followed-up Speed with Twister, another great action film.  He then almost killed his career by writing and directing Speed 2: Cruise Control.  This movie was so bad that it might hold the title as the worst sequel ever, especially considering how good the first movie was.

If you like edge of your seat action, then I highly recommend Speed.