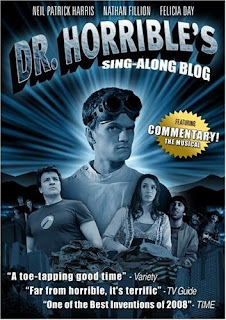 So, you’re Joss Whedon, a prolific writer.  It’s 2008 and there is a writers’ strike going on.  This means that you can’t work on that new show Dollhouse that you are developing.  It also means that you can’t do any script-doctoring for movies.  Other than a comic that you are writing each month, you’re pretty much at a standstill.  Your actor/actress friends are also sitting around without a lot to do because with no writers there are no new TV episodes.  How do you write and produce something new without violating the strike, and at the same time give your friends something to do?  You write and produce an internet serial.
Joss Whedon got together with his brothers Jed and Zack, and Jed’s girlfriend (now wife) Maurissa Tancharoen.  They wrote the story and composed the songs for Dr. Horrible’s Sing-Along Blog.  Joss shared a love of music and musicals with Neil Patrick Harris, so he called him to see if he was interested in playing the title character.  He was.  Joss had worked with Nathan Fillion on Firefly, Buffy the Vampire Slayer, and Serenity (2005) and figured he would be perfect to play the full-of-himself hero Captain Hammer.  The third member of the cast was the love interest, Penny, who was played by Felecia Day.  Joss had worked with her on the final season of Buffy the Vampire Slayer.
Three, fifteen minute episodes were produced which were then sold directly for download on iTunes and other sites.  They were released on a bi-weekly basis.  Ultimately, the three episodes were combined together and released on DVD.  I am referring to it as a “movie” here simply for the sake of expedience.
So what is Dr. Horrible’s Sing-Along Blog?  Billy is your basic aspiring evil villain, who has named himself Dr. Horrible, and he is video blogging about his attempts to be evil enough to be invited to join The Evil League of Evil.  He is not the best supervillain out there, and sometimes you can tell his heart isn’t really into it.  He really hates his nemesis Captain Hammer, though.  He keeps stopping Dr. Horrible in all his attempts.
Captain Hammer is really full of himself, and not the brightest person, either.  He’s got a square jaw and superpowers, though, so that makes him a hero.
Billy’s other main interest in life is Penny.  He meets her periodically at the laundromat.  He loves her, but has never dared say anything to her.  He wants to be successful first, before revealing who he is.  His two worlds collide one day when he, as Dr. Horrible, is trying to unleash his latest plot and he runs into Penny.  Captain Hammer “saves the day” and also runs into Penny.  Billy’s worst nightmare happens when she gets all gushy over Captain Hammer.
This is a Joss Whedon production.  If you are familiar with his other works you know that he has to throw something into these people’s lives to mess with them.  I won’t describe the plot any further since you should see what happens for yourself.
While all of this is going on, in true musical fashion the characters break out into song from time to time.  Billy sings about his feelings for Penny.  Captain Hammer sings about how everyone is a hero in their own way (my favorite song) and if you listen to the words they are a riot.
This is mostly a comedy and there are a ton of little visual jokes in it.  It took me more than one viewing to notice all of them.
You may be wondering why anyone would buy a DVD that just contains a 45 minute piece of entertainment.  The answer is that the DVD has something like 3 hours of entertainment on it.
First is a regular cast and crew commentary for the movie.  Second is Commentary: The Musical.  Joss, Jed, Zack, and Maurissa got together and wrote more songs commenting on the movie, the writer’s strike, and each other.  They then sang these songs as a second commentary.  You have to listen to it to really get the experience.  Third is a “Making of” featurette.  Finally, what may be the best extra feature of all is a set of videos that Joss Whedon solicited from fans.  I’ll explain.
The movie is about Dr. Horrible’s attempts to join The Evil League of Evil.  When this was released on the internet, Joss asked fans to submit their own video applications for why they should be invited to join The Evil League of Evil.  What Joss considered to be the ten best are included on the DVD.  Several of them are hilarious, and a couple of them are as good as anything in the Dr. Horrible movie.  Even if you don’t watch extras on DVDs, you have to watch these videos.  If you don’t, you are really missing out.
I think almost everyone will be won over by Dr. Horrible’s Sing-Along Blog.  It’s funny, entertaining, and great way to introduce yourself to Joss Whedon’s style without having to watch all of his TV shows.  On its own it would get four stars, but the extras on the DVD push it to the top.  I give this my highest recommendation.
Chip’s Rating: 5 out of 5 stars