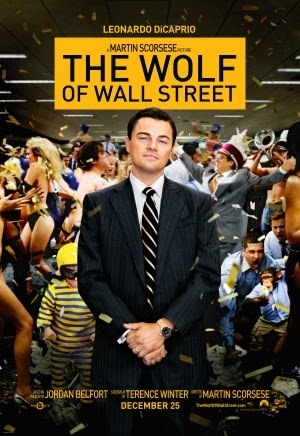 The film The Wolf of Wall Street is based on the book of the same name by Jordan Belfort.  He is the main character in the film and is played by Leonardo DiCaprio.  It details ’s meteoric rise to riches in the late 1980s by running a brokerage company that sold, sold, sold, to naive customers who were looking to get rich quick themselves.  It also shows the excess that he and his employees enjoyed during their high flying run.  And in a movie about excess, this certainly has an excess of it, from dwarf tossing, to paying someone to shave their head, to prostitutes practically being employees of the company, to mounds of drugs, and to piles of money.  I’ve only seen four of the Best Picture nominees at this point, but so far this is the most entertaining one.


Director Martin Scorcese has been criticized in some quarters for showing the excess.  Some people are saying that it “celebrates” those excesses and that the film will inspire others to copy ’s actions.  I think they are saying this because DiCaprio plays as one of those guys who every man wants to be and every woman wants to be with.  He’s one of those magnetic people who can talk a person into anything, especially women.  And let’s face it, was rich and powerful – something that most women find attractive.  Throw in handsome (he’s played by DiCaprio) and you’ve got the trifecta.

It think what has bothered some people is that millions of years of evolution have made their instincts be ones that say this man is very desirable.  The power means he’s an alpha male.  The riches mean he’s a good provider.  And the good looks mean that he’s healthy.  The problem occurs when their more developed modern brains reject those instincts because they find his actions repugnant.  The result is that they find themselves attracted to someone they do not want to be attracted to and this makes them uncomfortable.

What amuses me most about all of this is that the things that I have heard the most complaining about – the drugs and the adultery – aren’t the things that did that really hurt anyone.  He stole millions and millions of dollars from thousands and thousands of people – many of them their entire life savings.  He destroyed a lot of lives through his shady dealings, yet showing that onscreen has not generated much indignation at all.  It’s sort of like when some people got upset with Hit Girl’s potty mouth in Kick-Ass (2010), but weren’t bothered by her killing dozens of people.

In the film we see try to start a job as a broker on Black Monday in 1987 when the stock market fell over 500 points.  He’s out of a job and in desperation finds work at a nothing place that sells penny stocks.  He quickly sees the potential and starts his own company with some guys he knows that have no formal education, but that know how to sell things – mostly drugs.  That company has a meteoric rise and soon everyone is living the high life.  We know that the bill is going to have to come due someday, and it is represented by FBI agent Patrick Denham (Kyle Chandler), who we see periodically in the movie.

Besides the two other main characters are Donnie Azoff (Jonah Hill) and Naomi Lapaglia (Margot Robbie).  Azoff is a man who was in on the ground floor with and Naomi is ’s second wife.  Hill earned his second Oscar nomination for playing Azoff as kind of a dick.  Robbie is someone I had never seen before and let me tell you, she makes one hell of a first impression in this film.  Right off the bat is how beautiful she is.  When her character quickly sees that is her meal ticket out of she takes him back to her place and “slips into something a little more comfortable” – her birthday suit.  My reaction, like that of a lot of men watching, was along the lines of “Oh. My. God.”  And once you get past her beauty you notice that she nails the accent.  I was surprised to find out she was from .  She didn’t get a nomination, but if Hill got one then I don’t see why Robbie didn’t deserve one, too.  She’s certainly going to be getting a lot of job offers because of this film.

After these three people there are a number of quick appearances by big names and familiar faces.  Matthew McConaughey plays a mentor to .  Rob Reiner and Christine Ebersole play ’s parents.  Spike Jonze plays the guy who hires at the penny stock firm.  Jean Dujardin plays a Swiss banker.  Joanna Lumley plays a British aunt of Naomi.  Jon Favreau plays a lawyer advising on the SEC.  And there’s a fun “appearance” by Steve Buscemi when they are showing an old episode of the TV show The Equalizer on TV.  The real Jordan Belfort also cameos at the end of the film introducing his character to an audience.

I mentioned at the top that this was the most entertaining of the nominees that I had seen so far.  As you can tell, I am not one of those people that are upset by movies showing immoral/illegal behavior in them.  And I don’t put a lot of stock (pun intended) into the theory that lots of people are going to try to act like .  As the movie shows, either you’ve got the gift of gab or you don’t.  And without many millions of dollars people are going to find it hard to act like .  That’s the practical side.  The other side is that the theory itself is no different from the ones that say watching a movie that has teenage sex in it, or gun violence in it, is going to encourage people to do the same.

Even the people not opposed to it being in a film say that the subject matter is not “worthy” of a Best Picture nomination.  Well, one of the most magnetic characters ever on film was Hannibal Lector in Best Picture winner The Silence of the Lambs.  Has that film inspired lots of people to become serial killers and cannibals?

Another thing that made the news about this film is that it set a record for the most F-bombs uttered in a narrative film.  (The documentary F*ck still holds the record for all films by a large margin.)  First of all, who sits there and counts swear words while watching a movie?  Talk about not having a life.  Second of all, I think there may have been some creative counting done to get to the final number.  The supposed total averages to something like 4 or 5 times a minute.  I think whoever was counting was multiplying by the number of people in some crowd scenes.  There were a few times where shouted it into a microphone and his employees shouted it back at him.  I think instead of counting that as two each time it got counted as dozens.

DiCaprio looked like he was having a lot of fun and he gets a chance to shine.  I think this is his best performance since his last nomination for playing Howard Hughes in The Aviator, another Scorcese film.  When he won the Golden Globe for Best Actor in a Comedy or Musical for playing Belfort DiCaprio seemed quite amused to be considered a comic actor, thanking his “fellow comedians” Christian Bale (nominated in the same category) and others.  Some have charged that DiCaprio being Oscar nominated is what kept Tom Hanks from receiving one for Captain Phillips.  I don’t know about that.  I’d be more inclined to question Christian Bale’s nomination for American Hustle than I would DiCaprio’s.

While I would not call The Wolf of Wall Street an out and out comedy it does have a lot of very funny moments in it.  I was laughing quite a bit.  In the last 20-30 minutes the film does turn more serious and the transition is a little bumpy.  The movie is three hours long, but I didn’t notice the time passing at all.  It kept me engaged the entire time.  Unless you feel you would be offended by the subject matter then I highly recommend this film.