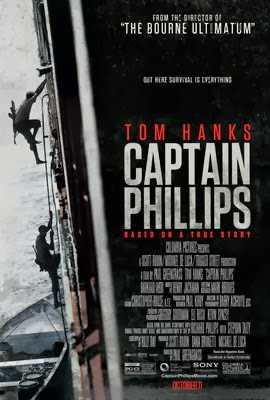 The film Captain Phillips is based on the book A Captain’s Duty: Somali Pirates, Navy SEALS, and Dangerous Days at Sea by Richard Phillips and Stephan Talty.  Changes were made in the film’s plot to pump up the part Captain Phillips played and this has led to some backlash about “falsifying the story”.  I see it more as the filmmakers were simply trying to increase the tension and heroism in some scenes, much like the film Argo (2012) did last year.  The nomination it received is for “Best Adapted Screenplay”, not “Most Faithful to the Truth Screenplay”.  Despite this, if you are like me and remember the news story from 2009 then this is a pretty straightforward movie with no real surprises.  Don’t worry, though.  I will not be spoiling the ending for anyone who does not know what happens.


Captain Richard Phillips (Tom Hanks) is in charge of getting an American cargo ship from to by traveling down the pirate-infested waters of the coast of .  We see how they have little recourse if pirates do target their ship.  They can try to outrun them, or try to spray water to keep them from boarding, but that’s about it.  Once they do get onboard only a few pirates armed with automatic weapons can easily take over a ship whose crew is unarmed.

By the way, the movie doesn’t answer this, so a lot of people were left wondering why ships like this don’t arm themselves.  The answer is pretty simple: maritime law prevents cargo ships from doing so.  A ship that carries weapons is considered a warship by international law and there are severe restrictions on where they can travel.  Think about it: if you were a small nation would you want a huge cargo ship sailing into your port with weapons all over it?  It would be ideally positioned to be the first wave of attack on your country.  So, because companies are in the business of making money they figure the losses from piracy will not be as large as the losses from no longer being able to sail into most ports.

Once the pirates are onboard the ship their leader, Muse (Barkhad Abdi), is tricked a couple of times by Phillips, but sees through some of the other ruses.  The crew has hidden in the Engine Room, but Muse knows they have to be onboard somewhere and he wants to find them.  And once things go south Muse figures Phillips will make an excellent hostage to be ransomed for more money.  Eventually the U.S. Navy gets involved.

This is one of those films that are very clearly a starring vehicle for the lead actor.  Tom Hanks is the only household name in it.  And even among movie watchers there aren’t a lot of familiar faces.  Catherine Keener cameos at the beginning as Phillips’ wife, but she’s never seen again.  There are some recognizable character actors among the ship’s crew, but most people would probably have to look them up to recall their names.  And the Somali pirates are all played by newcomers to the movies.  This is the first film for all four of them.

It surprised some that coming out of this film one of those newcomers – Barkhad Abdi – received an Oscar nomination for Best Supporting Actor, while Tom Hanks did not receive one for Best Actor.  I honestly didn’t see anything outstanding with Abdi’s portrayal, but then I haven’t seen the other men that were nominated yet either.  I thought he did a fine job, but I can’t say how good it was relative to others.

Hanks certainly gets to emote up a storm.  He alternately plays drillmaster, wily veteran, heroic Captain, man trying to put on a brave face, and man scared out of his mind.  I think the answer to why he was not nominated comes down to the fact that for the most part the audience can’t actually see him playing these various emotions.  We have to rely on his voice to really tell us his state of mind.  The reason we can’t really see him emote is because of the heavy shakycam cinematography that Director Paul Greengrass favors.  It never stands still long enough for Hanks to play a scene where we can really connect with him.  And since 70% of communication is visual, not verbal, the inability to truly concentrate on Hanks’ face is what I feel ultimately kept him from getting nominated.

And yes, if you hate shakycam this film is more than two hours of watching people bobbing around in the movie frame.  I’ll be honest: I selfishly was hoping this film would not be nominated for Best Picture so that I didn’t have to watch it.  After two Bourne movies and United 93 I was fed up with Greengrass bouncing the camera around.  I swore I would never watch another one of his films unless it received a Best Picture nomination.  I relented and tried Green Zone hoping he might have matured as a director, but if anything it was worse.  I shut it off after 10 minutes.  I think that if Greengrass could get away with setting his camera on top of a paint mixer, he would try it.

So if I hate shakycam that much, why am I still recommending this film?  Because despite the fact that I had to look away from the screen periodically to let my eyes readjust to normal it was still a story that had some good tension in it.  It will certainly help people’s enjoyment of this film if they do not know what happens to Captain Phillips.  And Hanks does do a very good job in the role.

Other than the shakycam I will say that the film dragged slightly in a couple of places.  They could have trimmed 15 minutes from it and the movie would have flowed a little better and kept the tension up a little more.

If you hate shakycam and already know what the outcome of this story is from the real events then you may want to skip this.  If you like Hanks, the story sounds gripping, or shakycam doesn’t bother you, then I recommend you give this film a try.