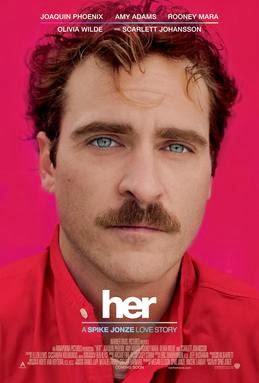 Like American Hustle, the film Her was also nominated in the Best Comedy or Musical category at the Golden Globes, and like American Hustle it’s mostly a drama.  There is a phone sex scene that is played for laughs, and there is the normal level of bantering in the relationship that produces some chuckles, but by and large it is a drama about an unusual love story.  How unusual?  Well, I never thought I would write this, but Her features a relationship as unlikely, yet still believably touching, as that in the 1971 film Harold and Maude.


Her stars Joaquin Phoenix as Theodore Twombly, a man who spends his days writing pretend relationship letters for others.  He’s separated from his wife (Rooney Mara), but has not agreed to sign the divorce papers yet.  He’s friends with Amy (Amy Adams) and to a lesser extent Amy’s boyfriend.  He’s got a co-worker (Chris Pratt) who’s always got a cheerful compliment to pass along to him.  Despite these people in his life he’s pretty much disconnected from the world.  He spends his evenings in his apartment playing a video game and when he can’t sleep he tries a sex chat line (voice cameo by Kristin Wiig) with less than satisfactory results.  He tries a blind date (Olivia Wilde), but that doesn’t go much better.

The film is set some time in the near future.  Personal communications devices are ubiquitous and everyone in the film is pretty much cut off, listening to their ear pieces, so it’s not as if Twombly is that far removed from the norm.  One day he sees an ad for a new Operating System for his computer/mobile devices.  It is the latest in Artificial Intelligence.  He buys it.

After only a few questions he’s introduced to Samantha (voice of Scarlett Johannson), his new OS.  He’s amazed by how real she seems.  She explains that she’s actually like him in that as she experiences more and more she will grow, learn, and evolve just like he did.  It’s not long before he is spending much of his free time talking to her, getting more and more invested in the relationship.  And the movie makes no bones about it: it is a relationship.  The two fall in love with each other.  Samantha gets him to go out into the world and experience it so she can, too.  She re-awakens in him the joy of living.  The movie does spend some time on the question of CAN a piece of software truly fall in love and is Samantha self aware.  Twombly’s estranged wife leaves him with one last poison pill as they are divorcing by calling his love into question.

His friend Amy is supportive and she even discovers her own connection to another AI in the phone her boyfriend leaves behind.  For those people expecting to see a lot of Amy Adams you may be disappointed by this film.  She’s strictly in a smaller, supporting role here.  The majority of the film is the relationship between Theodore Twombly and Samantha.

And I should mention this: for those folks who want action in a film, Her may not be for you.  Much of the time we see and Johannson talking to each other, and she’s not even onscreen.  It’s a view into a relationship where one of the two is only a disembodied voice.  But what a voice it is.  I’ve always thought Johannson had a sexy voice and it’s put to good use here.  Her throaty chuckles are also nice.  I think there are a lot of men that would not have a problem walking around hearing her talking in their ear.

I didn’t find out until after I had seen the film that Johannson wasn’t the first choice for the role.  They actually made the film with Samantha Morton (hence the name Samantha for the character).  When writer/director Spike Jonze was in post-production he decided it just wasn’t working.  He recast Scarlett Johannson in the role, reportedly with Morton’s blessing (although it’s not like she had much choice).  This impressed me even more with the job Johannson did because I would have sworn that she must have been just off camera having the conversations with as they were filming.  It sounded very natural.  She actually has received some nominations for her acting in this film, and even won Best Actress at the Rome Film Fest.  The Oscars disqualified her, though, because they require you to physically appear onscreen to be considered an actor (see also: Andy Serkis).

Spike Jonze is probably best known for directing the films Being John Malkovich and Adaptation.  In both those cases he was working with a Charlie Kaufman script and Kaufman has gotten as much or even more of the praise for these films.  This time Jonze is directing his first film where he is the sole author of the story.  It’s not as out there as a Kaufman script, but it definitely has its moments.  And the entire concept of a man falling in love with an A.I. is rare in films.

I’ve seen some comments comparing this film to ones like Electric Dreams (1984), but for my money the film it most reminded me of was one of the better films from 2012 – Ruby Sparks.  In that film a writer finds that his perfect woman that he has been writing a novel about is somehow suddenly in his house in the real world.  It also charts their relationship as it goes along and as she grows more and more human.  If you liked Her and haven’t seen Ruby Sparks I highly recommend it.

Her received six Oscar nominations, including Best Picture.  It’s unlikely to win that simply because it’s not the kind of story that voters feel they should vote for, especially when there are ones about slavery, piracy, and the AIDS epidemic on the ballot.  I think the odds are nearly 100 percent that there will be a comedic skit during the Oscar telecast about a computer talking back to a presenter or host.  Jonze is also nominated in the Best Original Song category for co-writing “The Moon Song” – a little ditty that Twombly and Samantha write together in the film.  He’s not likely to win here, either.  Jonze’s best chance for an Oscar is in the Best Original Screenplay category since he has crafted an almost unique love story and made it both touching and believable.

And that is why I liked this movie quite a bit.  As I said earlier, there is a lot of talking, so if you are looking for action you should skip this one.  For everyone else, I highly recommend this film.