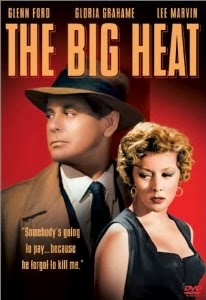 In my parent post for this set of Gloria Grahame movies I mentioned that she had been twice nominated for Oscars, winning once, but that I felt she should have been nominated two other times.  One of those I discussed in my review of In a Lonely Place.  The Big Heat is the other.  I was surprised when I found out she wasn’t the first choice to play the part she did.  The producers wanted Marilyn Monroe, but she would have cost too much, so they “settled” for Grahame.  I can’t imagine in Grahame’s role in this film, especially with the grit that is needed for it.  The Big Heat is not a nice film.  The bad guys are really bad, and even the good guy, driven by revenge, does things that are not much better.  The title of the film is very fitting.


Detective Dave Bannion (Glenn Ford) is assigned to investigate the suicide of another cop named Tom Duncan.  It should be an open and shut case, but a mistress of ’s comes forward and says that there’s no way that he killed himself.  Besides the fact that a mistress even exists, ’s widow Bertha (Jeanette Nolan) is also angered when Bannion starts asking questions about how could have afforded houses for both his wife and his mistress on his cop’s salary.  Bannion’s boss reads him the riot act for disturbing the widow.  He just wants Bannion to close the case.

As we quickly come to find out, Bannion may be the only honest cop on the force.  And even those that aren’t on the payroll of the mob boss are cowards who don’t dare make a stand.

After ’s mistress is tortured and killed Bannion takes on the city’s mob boss Mike Lagana (Alexander Scourby), even though it’s not his case.  It’s also one of the dumbest things Lagana thinks he’s ever seen since it’s an open secret that he controls the cops.  The Police Commissioner is even a poker buddy of Lagana and his right hand man Vince Stone (a scary good Lee Marvin).  Bannion is soon getting anonymous threats, yet he continues his investigation.  When violence hits very close to home, and his own police force won’t investigate it, he resigns as a Detective to start a one man search to figure out what is going on and to get revenge.

His investigation leads him to Debby Marsh (Grahame), the girlfriend of Stone.  Bannion tries to get all high and mighty with her, pointing out that she’s living on mob money.  Her response is a matter of fact, “I’ve been rich and I’ve been poor.  Believe me, rich is better.”  It’s lines like that that I just can’t picture delivering with the same level of apparent real world experience.

Unfortunately for Marsh, she was spotted talking to Bannion and in response her boyfriend Stone horrifically injures her.  He leaves her alive, though, and she starts to help Bannion with his investigation.  And despite what happened to her, she almost becomes the moral voice of reason when Bannion has sunk so low into his desire for revenge that he’s going to kill someone.  Marsh knows he’s a good man and that there would be no coming back from that for him.  Instead, she takes matters into her own hands.  Where the mystery leads may be someplace you do not expect.

Fritz Lang directed this film.  He made a very interesting transition from making German expressionistic films to making American noir films.  When I think of Metropolis and The Big Heat together they seem so different that it’s tough to imagine they came from the same man.  And it’s not just a “career is failing so he did bad B movies” situation, either.  Lang did a very good job with several of his later noir films, including this one.

Glenn Ford, Gloria Grahame, and Lee Marvin are the stand outs in this film.  Each of them approached their roles with a lot of seriousness.  The anger expressed in the movie feels like it’s coming from real situations.

If you hate noir films then you should probably avoid this one.  For everyone else, if it sounds interesting then I recommend you give it a try.