A Tribute to Bill Knight and The Way We Get By 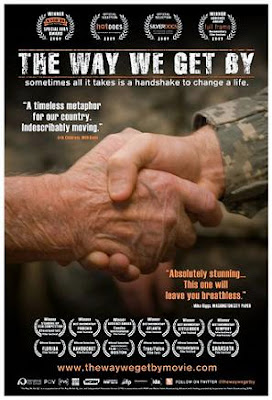 First a little background: is a city in whose population is small enough that it wouldn’t even be considered a city in more densely populated areas.  What it does have, all out of proportion to its size, is an airport with a massive runway more than two miles long.  It was even one of the designated emergency landing sites for the Space Shuttle.  And the location of the airport in the extreme upper northeast of the means that it is ideally suited for all the big cargo planes and troop carriers that need to fly to Europe and the .  If someone was deployed to or was coming home from there chances are very good that they went through .

Back in the mid 2000s filmmaker Aron Gaudet tried to call his mother Joan in over the course of more than a day and couldn’t get in touch with her.  She was elderly, and suffering from various ailments, so he was quite worried.  When she finally called him back she explained she had been at the greeting troops and that if he needed to get a hold of her he should call her cellphone.  His reaction was along the lines of “since when did my mother get a cellphone and why is she going out at all hours of the day and night to the airport?”  He had to see for himself.

He went home to visit and accompanied his mother to the airport.  There he found a whole group of volunteers who had taken it upon themselves to shake the hands of every single military person either leaving or returning.  Most of these greeters were elderly because they were retired and could adjust their schedules on little notice.  This meant that they might get a call at 4:00 AM that a plane was coming in at 4:45 AM and they would get up, drive to the airport, and greet the returning troops.

Aron Gaudet was moved by this.  On that same visit he met Bill Knight.  Bill was often the first person the troops saw when they entered the terminal.  As it turns out, just a few hours before Aron met him Bill had been diagnosed with prostate cancer.  Bill wasn’t one to feel sorry for himself, though, so he was right back at the airport, doing what he loved.  Aron visited with Bill, talked with him about why he was doing this, and decided that a film had to be made.  Along with producer Gita Pullapilly, he spent the next four years talking with his mother, Bill, and another man named Jerry Mundy, as well as shooting footage of the troops arriving and departing.

You may be thinking that this would either be a boring subject, or that while it would be interesting for a few minutes, there’s not enough there to sustain it.  Or perhaps you are worried about what slant the film takes on the wars in and .  First, the film is apolitical; it’s neither “Yeah! Go war!” nor is it “The evil military is killing women and children!”  It’s not about the war; it’s partially about the troops, but it’s mostly about the greeters.  And the film becomes something far more than just a bunch of people shaking hands.  It becomes a reflection of how these three elderly folks treat their age and how they find meaning in their lives.  It is a very human film.

I recognized someone I knew in each of these three people.  While I am from I do not think that these three would be strangers to those outside this area.  I think that each of them represents universal human qualities, whether it’s Bill as the heart, Joan as the mother, or Jerry as the character cracking jokes and puns.  We learn more about each of the three and what drives them to do what they do.

And the greeters do more than just shake hands.  They provide cellphones for the returning troops so they can call their families.  They joke with them, bond with them, both coming and going.  Joan can’t go when troops are leaving because it hurts her too much to think some might not be coming back.  So what will she do when her own granddaughter, a helicopter pilot, is being deployed to ?

Bill Knight, as the oldest of the three, perhaps has the biggest presence in the film.  He outlived not one, but two wives, and two daughters as well.  When we first meet him he lives in squalor in an old farmhouse he can no longer maintain.  His own comfort is of little consequence to him, though.  His focus is greeting the troops.

So why post this now, and why call it a tribute?  Because Bill Knight died Christmas Day 2013 at the age of 91 and the memorial service for him was held yesterday in .  Several hundred people attended, including some who had been inspired by seeing the film The Way We Get By to become troop greeters themselves.  But the tributes that would have meant the most to Bill were all the tweets and notes from the men and women that he helped to greet when they returned home.  The Maine Troop Greeters have met more than one million returning troops and Bill once estimated that he had shaken the hand of more than half a million of them.  For almost 10 years he did not miss one single plane, regardless of the time of day or night, sometimes driving to the airport 8 times in one day.

For the last couple of years he had unfortunately had ailments that had prevented him from continuing.  He died in his sleep in the Maine Veteran’s Home.  Fellow greeter Jerry Mundy, as well as filmmakers Aron Gaudet and Gita Pullapilly, now husband and wife, had visited with him in his last hours.

Here is a local news report with people talking about what Bill Knight meant to others.

I never met Bill personally, but through the film The Way We Get By I feel as if I did.  It is probably the most moving documentary I have ever seen and I cannot recommend it enough – 5 out of 5 stars.  While I’m sure there are people somewhere who have watched this film and are too "cool", or too jaded, or too young to have ever asked themselves what they are doing with their lives to be moved by it, they are in the vast minority.

And the centerpiece of the film is Bill Knight.  As he says in the documentary (and at the end of the trailer below) – “My life doesn’t mean a hell of a lot to me, but if I can make it mean something for somebody else…that’s my endeavor.”


Now if you'll excuse me, I'm going to go take my DVD of The Way We Get By off my shelf and watch it again.
Posted by Chip Lary at 11:02 AM