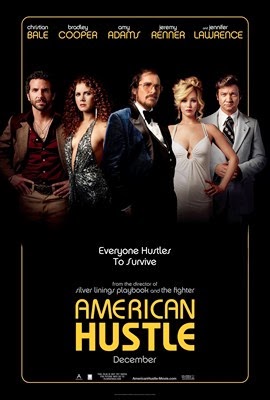 American Hustle won the Golden Globe for Best Comedy or Musical and is nominated for 10 Academy Awards.  I’ll be honest: if I had not known about the Globes win it would not have even occurred to me to think of this film as a comedy.  Yes, there are a few moments here and there that elicit a chuckle, but by and large this is a drama.  Among the Best Picture nominees The Wolf of Wall Street is much funnier than American Hustle.  Music plays a big part in American Hustle, up to and including one of the characters lip-syncing along to a song, so perhaps the combination of a little comedy and a lot of popular songs is what garnered it the Globes win.  Overall, this is a good movie, but you do have to have some patience.


The 10 Oscar nominations tie it with Gravity for the most this year.  Director David O. Russell has done the unprecedented – he has had two consecutive years with a film that not only received nominations in all “Big 5” categories (Picture, Director, Actor, Actress, Screenplay), but also in the Supporting Actor and Actress categories, too.  He did it last year with Silver Linings Playbook.  Prior to that only five films in the entire history of the Academy Awards had ever achieved such a feat.  They are Who’s Afraid of Virginia Woolf?, Sunset Blvd., A Streetcar Named Desire, Network, and Reds.  That’s some good company to be in.  Regardless of whether it wins any Oscars or not this is still an impressive achievement for American Hustle.  (Silver Linings Playbook only won for Jennifer Lawrence as Best Actress.  She’s probably American Hustle’s best chance for a win, too.)

The film was originally titled American Bullshit, but since that would have made it impossible to put on posters and in TV ads it was changed to the name it now has.  It’s a fictional version of the late 1970s ABSCAM scandal.  When the film opens it states “some of this actually happened.”  That’s true, but the same thing could have been said at the opening of Titanic, too.  ABSCAM involved the FBI using a con man in a sting to capture politicians taking bribes.  Other than that, most everything in this film is from the mind of the screenwriter.

Actually, I’ve read multiple sources that have said that much of the film is improvised by the actors and that it is greatly changed from the script.  If true, this does call into question Russell’s nomination for Best Original Screenplay.  It also means we end up with scenes such as Amy Adams sitting on a toilet and screaming.  Why is that scene in the movie?  Probably because either she or Russell had always wanted to film something like that.

I mentioned at the top that you will need a little patience with this film.  It doesn’t really gel until about 70 minutes in when all the various pieces come together.  When they do, though, what follows is 15-20 minutes of great entertainment which is easily the highlight of the film.  And not the least of this is a great cameo, which I will not spoil.  This section is where I sat up and really started to like the film.  Prior to that American Hustle is, frankly, kind of slow.

We first get the backstories of the main characters, Irving Rosenfeld (Christian Bale) and Sydney Prosser (Amy Adams).  We see how he threw rocks through windows to help his father’s glass business and how she was an exotic dancer who reinvented herself as an office worker at a magazine.  After meeting they immediately start a relationship.  We then spend considerable time with them running cons.  Finally they get caught by FBI agent Richie DiMaso (Bradley Cooper) who blackmails them into working for him to capture bigger fish.  That starts with a Mayor from a city that is looking to revitalize his town.  He’s played by Jeremy Renner.

Finally, Rosenfeld has a wife named Rosalyn (Jennifer Lawrence) whose child he has adopted.  She knows that he’s carrying on an affair but she isn’t going to leave him, and even expertly manipulates him into staying with her.  is in the film mostly to be loud, to be brash, and to delight smoking fetishists.  The entire part could actually be lifted out of the film and not change much.  (She triggers something I won’t spoil, but it could have been set off a dozen other ways.)  Being extraneous doesn’t mean that she’s not fun to watch, though.  Russell is rewarding by giving her a role where she can really chew the scenery.  Most of the humor in the film also comes from her.  Despite the more cartoonish aspects of this character even she gets a real set of scenes during the 15-20 minutes I mentioned above.  Her reaction to finally meeting ’ character is chilling.

Bale committed to the role by gaining a lot of weight.  The opening of the film shows him with his gut hanging out as he prepares a really bad comb over.  It’s probably a big part of why he got nominated.  Contrast this with his appearances in The Machinist and Batman Begins.

Like and Bale, Adams and Cooper also do good jobs.  For my money, though, the best performance in the film didn’t even get nominated.  That is Jeremy Renner as Mayor Carmine Polito.  As seen in the film he’s a good guy who loves his city and just wants to do the best for it.  When a supposed Arab sheik wants to invest millions in bringing casinos to the city Polito jumps at the chance, compromising himself along the way.  Renner gets to play a wider range of emotions than we get from the other four characters.

In addition to those seven major nominations, American Hustle also received ones for Best Production Design and Costume Design for recreating the look of the late 1970s.  I’m surprised it didn’t receive a nomination for Best Makeup and Hair considering that the hairstyles of the various characters, from Bale’s comb over to Cooper’s perm to Renner’s “big hair”, are played up in the film.  Renner also easily looks 15 years older than he did in last year’s The Avengers.

For anyone who likes 70s music this film will be a real treat.  There are a ton of recognizable songs that play throughout much of the film.  Jennifer Lawrence even lip-syncs to Live and Let Die during a montage of scenes that cut between her and Bale.  For the slightly older Mayor we see him encouraging a crowd to sing along with Tom Jones’ 1960s song Delilah.

Overall, American Hustle has some very good sections in it, but it also has some early on that probably would have been better if they had been removed to improve the flow of it.  Stick with this movie through the first hour or so, though, and you will soon be rewarded by what follows.  If this sounds interesting that I recommend you give it a try.