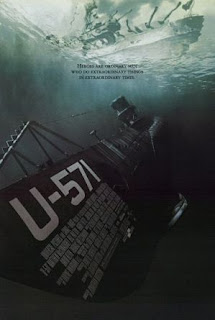 U-571 is the final submarine movie I am going to recommend.  It is a WWII thriller about an attempt to steal the Germans’ Enigma coding machine off a disabled U-boat.  It is not a film you watch for historical accuracy, but for the tension and thrills as events unfold.  It has many of the things you might expect from a sub movie: sonar pings, cat and mouse games with surface ships, depth charges, leaks, having to do dives that are too deep, etc.  What makes this movie a little different is that there are additional challenges in that the submarine the characters are on is unfamiliar to them, and it is badly damaged.

I shouldn’t really have to make this statement, but the prior responses to U-571 have shown otherwise: this film is a work of fiction.  It is no more real than Titanic (1997) was.  In one film an ocean liner hits an iceberg and sinks; in the other Allies attempt to steal an Enigma device off a German sub.  All characters and events other than this are made up.  Despite the obviousness of this, what seemed like the entire population of threw a collective hissy-fit that would have the temerity of showing Americans doing this instead of the British.  It even got to Prime Minister Tony Blair’s level where he called the film an affront to British sailors.  U.S. President Bill Clinton had to write a letter to Tony Blair telling him this was a fictional movie and the filmmakers had to place a disclaimer at the end of the film saying that it was not real.

Of course, the British lost whatever moral high ground they may have had when the very next year they did their own movie titled Enigma.  It was also completely fictional other than the overarching concept that there were British codebreakers led by a brilliant man.  In the real world that man was Alan Turing, someone who later had his life destroyed by the British government for being a homosexual.  In the film the Turing-like character was made a heterosexual and he was involved in multiple love affairs with women.  So much for a concern about historical accuracy when it comes to telling a story the filmmakers feel will be more compelling for its intended audience.

U-571 opens with the WWII U-boat of that name being damaged by the Allies.  It sends a distress call.  The Allies intercept the signal and throw together a plan to send an American sub disguised as a German U-boat to meet it.  It will pose as the rescuer, capture the U-571, remove the Enigma coding device, and then destroy the boat.  The device is vitally important because it’s how the Germans code their important messages to each other.  This code is unbreakable without one of the devices.  If the Allies can get their hands on one they will literally be able to understand everything the German military is saying.  It is so important that the Germans would literally sink their own U-boat before allowing the device to fall into enemy hands.  This is why the subterfuge is needed.

At first all goes according to plan, they get close, capture the sub, get the device, rig U-571 with explosive charges, and start to return to their own sub.  That’s when the real German rescue sub arrives and destroys the American sub.  The mortally wounded Commander Dahlgren orders the surviving men back onboard the U-571 and to use whatever means necessary to survive and to get the Enigma device to the Allies.  Command of the U-571 is taken by Lt. Tyler, a man that Commander Dahlgren felt was not ready for command because he did not know how to make the hard decisions necessary for a leader.  That will certainly now be put to the test.

The survivors face a ton of problems: they are on the same disabled sub that the Germans were on; all the labels and commands are in German, which most of them cannot read; they have German U-boats and surface ships after them; they have a Captain who may be unfit for command; they have a German prisoner that is much more than he claims to be; and even if they somehow manage to get to the safety of English waters how will they let the Allies know who they are when by all appearances they are an enemy U-boat that should be destroyed.

Much of the action and tension come in the section of the film where the Americans are on the U-571 trying to deal with all of these issues.  Like most submarine films, sound plays an important role.  The film was nominated for two Oscars for sound and won for Best Sound Editing.

U-571 is an effective thriller.  It keeps you engaged with any number of problems for the heroes to overcome.  It is not historically accurate, so do not watch it for that.  If you like submarine movies then this gives you pretty much what you would hope to see.  For everyone else, if it sounds interesting then I recommend you give it a try.