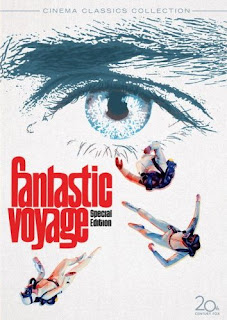 How can you have a submarine movie when there is no body of water for the sub to travel in?  When the medium the sub navigates in is an actual body, of course.  Fantastic Voyage features the concept of miniaturizing a small submarine and injecting it into a man’s body so that the crew can perform a life-saving surgery.  You may be thinking, “Hold on, are you talking about that Martin Short comedy with Dennis Quaid?”  The answer is no, not yet.  That is the 1987 movie Innerspace, which was a comedic take on the idea.  You can read my review of that film here.  No, Fantastic Voyage is a serious adventure film, full of Cold War intrigue, thrills, death-defying adventures, and enough real biological knowledge that parts of it were used for years afterwards to demonstrate to students some concepts of human biology.

This film was directed by Richard Fleischer, who also helmed the submarine movie 20,000 Leagues Under the Sea, which I have already reviewed here.  Many people think that Fantastic Voyage was based on the novel of the same name by famous science fiction author Isaac Asimov.  What actually happened is that Asimov was approached about doing the novelization of the film.  He agreed if they would give him free reign to fix some of the scientific mistakes and plot holes he felt were in the script.  (More on that below.)  He was an infamously fast writer and delivered the novel so quickly that it was actually published before the movie got released – which made it look like the movie was based on the book.

The film opens with Lieutenant Charles Grant (Stephen Boyd – Ben-Hur) delivering scientist Jan Benes (Jean Del Val) to a Secret Service escort.  Benes has defected to the West, but before he can reach his destination the escort is attacked and Benes is wounded.  He suffers a stroke and will die from it if it is not operated on.  Unfortunately, it is in a location in the brain which is inoperable.  Grant, who was not privy to why Benes was so important, is brought to a secret laboratory and finally told everything.

Both the and the U.S.S.R. have developed miniaturization technology, but it is limited to only 60 minutes of effectiveness.  After that point what was miniaturized returns to full size.  Benes has come up with a way to greatly extend that duration and he was going to be sharing that with the   If he dies the Soviets will be far ahead of the West in this regard.

The head of the Combined Miniature Deterrent Forces (CMDF) is General Carter (Edmund O’Brien – White Heat).  He tells Grant that there is a plan to miniaturize a small submarine and to send it and a medical crew into Benes’ body to perform the surgery he needs to save his life.  Carter explains to Grant that the surgeon, Dr. Duval (Arthur Kennedy – Lawrence of Arabia), is the best there is, but that his loyalties are somewhat suspect.  Grant is to be included in the crew to keep an eye on Duval and to make sure he doesn’t try to harm Benes in some way.  Grant is very nervous about what is going to happen to him, but he follows orders.

He meets the rest of the crew – Dr. Duval’s surgical assistant Cora Peterson (Raquel Welch), designer of the sub and its pilot Captain Owens (William Redfield), and mission lead Dr. Michaels (Donald Pleasance).  Michaels is there to help Grant keep an eye on Duval because Grant does not have enough medical knowledge to do the job alone.  As far as the rest of the crew knows, Grant is there to run the communications equipment.

We see the entire procedure of sterilization and miniaturization and it was something for the 1960s.  This film, like 20,000 Leagues Under the Sea, won Oscars for Best Color Set Design and Best Special Effects.  Once inside the body there are many more scenes of what it would look like to get a microscopic view from that perspective.  Nowadays it would all be done via CGI, so back then it was eye-popping.

The plan, which was to be injected in the carotid artery so that the sub could go with the flow of blood into the brain then come out via the jugular vein as the blood flows away from the brain, almost immediately goes bad.  There was a hole in the wall of the artery and the sub gets sucked out.  From the color of the blood cells (blue not red) they realize they are now in a vein and are headed for the heart.  There is no way that the sub would be able to take the pounding of such a powerful muscle.  It is decided to induce a cardiac arrest in Benes to allow the sub to pass through the heart safely.  There is a time limit on how long they can wait before restarting the heart, though.  It is a tense scene.

They then find themselves in the lungs of Benes.  The sub somehow starts to develop an air leak.  They get it repaired, but they are almost out of oxygen.  They go on a dangerous mission outside the sub to retrieve oxygen from an alveolus and bring it back.  This is one of the mistakes Asimov corrected in the book.  The oxygen they retrieved would be regular size molecules – far too large to fit into the breathing system of the sub.  In the book the crew has a portable miniaturizer with them in the sub.  They use it to shrink the oxygen molecules, and that problem is solved.

Combine this air leak with the fact that the laser which is to be used to burn away the area damaged by the stroke has been broken and Grant knows that someone in the crew is trying to sabotage the mission.  This puts him on high alert, but in order to repair the laser his communications equipment has to be cannibalized, cutting the sub off from the rest of the medical crew outside the body.  They will not be able to help him.

The crew decides to travel to the brain via the ear duct, but that means that any noise would set up vibrations in the ear that would destroy them.  With no way to tell the outside world what they are doing, will they be able to accomplish this?

And here is the kicker: they are subject to the 60 minute miniaturization time limit.  After that point they will expand to regular size and if they are still inside Benes when this happens he will be killed instantly.  This section of the movie plays out in real time, by the way.  From the moment they are shrunk, to when they re-expand, is almost exactly 60 minutes of running time.

I am now going to have a spoiler section to discuss how the book fixed the largest plot hole in the movie – one so obvious I even noticed it as a kid when I first saw the film.  I will not be spoiling who the saboteur is, but I will be discussing whether the attempt to get to safety outside the body is successful or not.

Once the surgery is complete and the crew, minus the saboteur, is trying to escape the body, the movie makes a huge mistake.  Even though the sub and saboteur have been crushed by a white cell, the material that they were made from is still inside Benes’ body.  It will still expand and kill him.  In the book Asimov has the crew attack the white cell that enveloped the sub in order to get it to chase them along their escape route.  When they are removed, so is the sub.  The movie also shows the laser used for the surgery being dropped and left behind.  The book has another character pick it up and bring it out.

Raquel Welch, who would have stood out for her beauty alone, is also squeezed into a form fitting scuba outfit for the scenes outside the sub.  At one point her character is attacked by anti-bodies and the men have to tear them off her before they kill her.  There was no planning or staging for the scene.  During the filming all of the actors were professionals and studiously avoided pulling off any of the prop anti-bodies that were on her chest, even though she was fully covered by the scuba suit.  Fleischer noticed that this left Welch looking ridiculous, so he told them they had to do that area, too.  The next take all the actors immediately went to clean that area off.  Fleischer stopped them again and finally sat down with them all to plan who would do what.

Like 20,000 Leagues Under the Sea, Fantastic Voyage can be enjoyed on two levels.  The thrills and adventures inside the body will satisfy kids (it spawned a Saturday morning cartoon show), and the Cold War intrigue and threat of the saboteur will keeps adults entertained.  If you do decide to read the book, you will find a greater depth of characterization, as well as a deepening of the relationships among the various people.  Overall, Fantastic Voyage presents an entertaining 100 minutes of film.  It won’t change your life, but it shouldn’t bore you, either.  If it sounds interesting, then I recommend you give it a try.