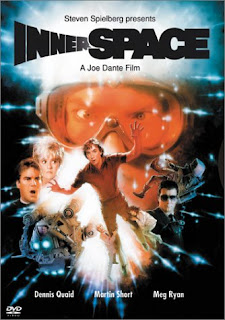 In my last post I reviewed the 1966 adventure film Fantastic Voyage, which had a small submarine and crew being miniaturized and injected into the body of a man.  (You can read that review here.)  Now imagine the same concept, but played for comedy.  What if a miniaturized sub and gung ho test pilot were injected into a random hypochondriac who can’t get anyone to believe that he is feeling weird things and hearing voices?  What if that hypochondriac is played by the master of the nervous twitch Martin Short?  And what if he has to try to thwart a criminal organization intent on getting the miniaturization technology?  The result is the 1987 film Innerspace - a shut your brain off and just enjoy the zaniness kind of movie.

When I think of Innerspace I think of the 1980s.  The people both behind and in front of the cameras are very much of that time.  This was the decade of Steven Spielberg Executive Producing what seemed like every other sci-fi or light horror movie.  Director Joe Dante had the best part of his career in the 80s (The Howling, Gremlins, Explorers), most of it when collaborating with Spielberg.  One screenwriter (Chip Proser) was coming off the 1984 film Iceman, while the other (Jeffrey Boam) would go on to write The Lost Boys (1987), Indiana Jones and the Last Crusade (1989), and Lethal Weapon 2 and 3.  Martin Short had become a household name from his work on SCTV and Saturday Night Live, and his prior film was 1986’s Three Amigos.  Dennis Quaid, who plays test pilot Lt. Tuck Pendleton, had been in movies for ten years, but had finally hit it big in the 80s with The Right Stuff (1983), Dreamscape (1984), Enemy Mine (1985), and The Big Easy (1986).  Meg Ryan, who plays Pendleton’s estranged girlfriend Lydia Maxwell, was coming off a small, but memorable turn as Goose’s girlfriend in Top Gun (1986), and was to hit it big two years later in 1989’s When Harry Met Sally.

It’s not all 1980s stars, though.  Dante included a number of familiar character actors in the cast.  Among them was William Schallert, who plays a doctor.  This is a reference to The Incredible Shrinking Man (1957), in which Schallert also played a doctor.  Another in-joke is that the symbol for the Combined Miniature Deterrent Forces from Fantastic Voyage appears at one point on a computer screen.  And while not directly related to shrinking people, but at least in the cult sci-fi genre, is Kevin McCarthy playing Victor Scrimshaw, the head of the organization that wants the miniaturizing technology.  He was the star of the 1956 film Invasion of the Body Snatchers.

At the beginning of Innerspace Pendleton (Quaid) has volunteered to be the test pilot for a miniaturization experiment.  He is to be inside a small sub, to be shrunk down, and then to be injected into a rabbit – all in the controlled conditions of a laboratory.  Unfortunately, after the shrinking has been completed, but before anything else can happen, a rival organization attacks the lab.  In the chaos a scientist manages to escape with Pendleton in a syringe.  While on the run he is fatally wounded.  Trying to save Pendleton’s life the scientist injects him into the first person he encounters – unsuspecting store clerk Jack Putter (Short).

Pendleton was unconscious during all of this, so when he wakes up he assumes he’s in the rabbit.  He can’t raise the lab on his radio, though.  He goes exploring in the body, attaching a device to the back of Putter’s eye in order to see what Putter is seeing.  This is when Pendleton realizes something has gone terribly wrong.  And as you might expect, having a tiny device shot into the back of his eye freaks Putter out because he doesn’t know what the heck happened.  Being a hypochondriac, though, he can’t get anyone to believe him when he says something is wrong.  It gets worse when Pendleton attaches a device to Putter’s auditory nerve and starts talking to him.  As far as Putter is concerned, he is literally hearing voices in his head and it freaks him out.

Pendleton finally manages to get Putter calmed down, they compare notes, and Pendleton convinces Putter to return to the lab.  You see, there’s a big problem.  While Innerspace does not have the time limit before re-expansion like Fantastic Voyage did, it has a countdown of a different kind: Pendleton has only a limited supply of oxygen with him.  It was just supposed to be a quick experiment in a lab.  If he can’t get out of Putter’s body and back to full size, Pendleton will suffocate.

Unfortunately, they find that the bad guys stole one of the computer chips needed for the process to return Pendleton to full size.  Being the gung ho test pilot, Pendleton is all for going after the bad guys to get it back.  However, Putter is far from being an action hero.  He is what would charitably be described as “meek”.  Pendleton’s life is in his hands, though, so they get mixed up with evil scientists, dangerous situations, and a mysterious man known only as The Cowboy (Robert Picardo).  Helping them with this is Pendleton’s estranged girlfriend, reporter Lydia Maxwell (Ryan).  She has contacts and might be able to locate The Cowboy.  But what happens when the bad guys shrink one of their own men and send him into Putter’s body to seek out and destroy Pendleton?

There is a lot of humor from Short’s character being placed in these situations.  There is also physical humor from Pendleton taking over control of parts of Putter’s body at various points, including rearranging his facial muscles to impersonate someone else.  Yes, the science in this film is about as accurate as that in screenwriter Proser’s prior film Iceman where a 30,000 year old Neanderthal who had been frozen in ice is revived.  So that is to say, not at all accurate.  Scientific inaccuracy did not keep Innerspace from winning the Oscar for Best Special Effects.

For those of you who saw the names Dennis Quaid and Meg Ryan together and wondered, yes, this is the film that introduced them to each other.  They were later married in 1991 and were one of the successful couples for almost 10 years before Ryan decided she had found a better deal in Russell Crowe, who she started sleeping with while filming Proof of Life (2000).  As it turns out, Crowe dumped her almost immediately afterwards, but the damage was done and Quaid and Ryan divorced.  Don’t feel too bad for Dennis Quaid, though.  He had to know what he was probably getting into because Ryan was living with her Top Gun co-star Anthony Edwards when she met Quaid.  She left Edwards for her new co-star, so Quaid simply had happen to him what he had done to Edwards.

As I said at the top, Innerspace is the kind of movie where you should just shut your brain off and have fun.  It’s not intended to be taken seriously, so the “science” in the film is there to further the plot or to set up jokes, not to be taken as either real, or even possible.  There is some good humor to be found and a decent amount of action.  If this sounds interesting to you then I recommend you give this a try.