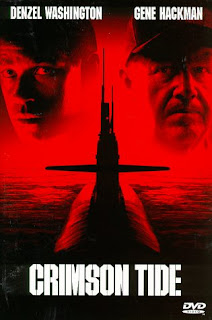 Crimson Tide was the first major submarine movie to be released after the huge success of The Hunt for Red October (1990).  You can read my review of that film here.  It was obvious that Producers Jerry Bruckheimer and Don Simpson were hoping to capitalize on the success of that earlier film.  The first clue is the title.  Yes, it ties in with the name of the submarine, the U.S.S. Alabama, since the University of Alabama’s sports teams are named the “crimson tide”, but the fact that the title was very similar to Red October’s was probably the biggest reason they went with it.  The second clue was the marketing.  Notice anything familiar about it? 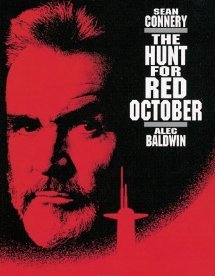 
In addition to Hackman as Captain Ramsay and Washington as Lt. Commander Hunter, you will also recognize some others in pre-fame roles.  They include Viggo Mortensen as Lt. Ince, James Gandolfini as Lt. Dougherty, Steve Zahn as William Barnes, and Ryan Phillippe, who was making his feature film debut.  Also in this movie is Rick Schroeder, trying to make the transition from child actor to adult roles.  Character actor George Dzundza rounds out the main cast as the Chief of the Boat, or “COB” for short.  Also watch for an uncredited cameo by Jason Robards as an Admiral.

One thing I should mention is that Crimson Tide isn’t a movie you watch for accuracy in much of anything.  There were so many errors in the script and movie that the U.S. Navy withdrew any cooperation in the making of it.  Among the stupidest is that several of the characters refer to the submarine they are on as a “ship”.  I worked at a naval shipyard for 2.5 years.  By the end of the first day I learned that the destroyers we were making were “ships”, not “boats”.  Boats were submarines.  Hence the “Chief of the Boat” title, as well as the movie title Das Boot aka The Boat.  Anyone who referred to them incorrectly got a ton of shit from his or her co-workers.  And we were just IT personnel supporting the construction, not people actually serving on them.

Speaking of the script, Quentin Tarantino famously did an uncredited re-write on it.  That’s where we get things like arguments over the Silver Surfer, Lipizzaner stallions, and references to other sub movies, including Run Silent, Run Deep, although Tarantino got the facts wrong on the last two.  Since Tarantino was around, Denzel Washington took the opportunity to very publicly confront him on his 1994 film Pulp Fiction and the use of a certain racial epithet in it.  felt that Tarantino, as a white man, should not include it in his scripts.  Tarantino must not have been too intimidated by since he still included it in his most recent film, Civil War Reconstruction era movie Django Unchained (2012).

So what is Crimson Tide about?  A radical Russian has seized control of a missile base in on the Pacific coast of .  He has also seized three attack submarines to protect himself.  He is threatening to launch the missiles at the   The ballistic missile submarine U.S.S. Alabama is ordered to set itself off the coast of in case it is needed to do a pre-emptive strike on the base.

Captain Ramsay (Hackman) is an experienced war veteran.  Due to an illness he had to replace his XO with a new man Lt. Commander Hunter ().  Ramsay was impressed with Hunter’s service record, even though it did not include any combat time whatsoever.  It’s obvious almost immediately that the two are miles apart in most areas and are going to have friction.  Ramsay is a gut instinct kind of guy, while Hunter is a thinker and planner.

Things come to a head when an order to launch missiles is received, but before they can do that a partial second message comes in.  It gets cut off before it can be completed.  It might be a message rescinding the first order.  The Captain makes the decision that since the last complete order received was the one to fire missiles then that is what he is going to do.  Hunter argues that they should try to re-establish contact to get the complete second message.  Ramsay refuses and Hunter mutinies.  The Captain is not without his own supporters, though, so he stages a counter-mutiny.  Which of these two will come out on top?

As if this situation wasn’t tense enough, the has also had to keep dodging the three attack subs controlled by the Russian radical.  It was one of those attacks that cut off the second message, and it is the threat that the might be destroyed before being able to launch that is driving the Captain.  And it wouldn’t be a submarine movie without flooding in a compartment and the threat of the sub sinking to crush depths.

As I mentioned earlier, both Hackman and Washington certainly have screen presence.  Seeing the two oppose each other makes for exciting, tense scenes.  Director Tony Scott ended up working with both Hackman (Enemy of the State) and (Man on Fire, Déjà Vu, The Taking of Pelham 1 2 3, and Unstoppable) again.

If you like tense scenes and an action thriller that actually poses some good “what would you do?” questions, then Crimson Tide is for you.  As long as you don’t think about the plot too much then you should probably enjoy it.  If this sounds interesting then I recommend you give it a try.