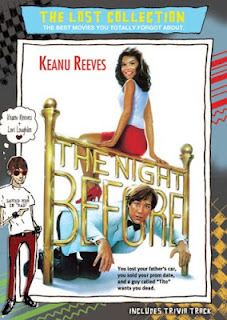 Before he was an action star, before he was in the Bill & Ted movies, even before a key supporting turn in Dangerous Liaisons, I saw Keanu Reeves in the comedy The Night Before (not to be confused with 1986’s About Last Night.)  It was written and directed by Thom E. Eberhardt as his follow-up movie to 1984 cult classic Night of the Comet.  (You can read my review of that here.)  The Night Before has obvious influences from both Risky Business (1983) and Adventures in Babysitting (1987).  It has just as obviously influenced a whole bunch of later films from a low of Dude, Where’s My Car? (2000) to a high of The Hangover (2009).

The movie opens with Winston Connelly (Reeves) waking up in an alley at night with no clue how he got there.  He’s wearing a white tux and carnation.  He looks around and he’s definitely in a bad part of town.  He’s got to figure out what happened to his wallet, car keys, his dad’s car, and oh yeah, his prom date.  Also, there is a guy named Tito who wants him dead.  He starts to remember things and we periodically see prior events in flashback.

Winston is a nerd who had peaked in high school as Vice-President of the Astronomy Club, that is until head cheerleader Tara Mitchell (the gorgeous Lori Loughlin) asked him to the prom.  She only did it because she lost a bet with another cheerleader, but Winston doesn’t really care.  Even though he’s nervous, he’s determined to make the best of it.  The fact that her father is the Chief of Police just adds to Winston’s jitters.

Things almost immediately go wrong when he tries to avoid a traffic jam and ends up in the bad part of town.  He and Tara try to go into a club to get some cash after his wallet is stolen, he’s slipped a mickey, and a whole new side of Winston surfaces.  Among other things he becomes a dancing machine (to the music of the P-Funk All Stars, including George Clinton and Bootsie Collins), insults a pimp named Tito, and, oopsy, accidentally sells to him for $1,500.  Now he’s got to find her and get her back before something really bad happens.

There’s a good mix of humor and some action.  There’s a running joke where his dad’s car is first stolen right in front of him and he then periodically sees it getting driven around the city while he is trying to track down .  Speaking of which, she is not a stereotypical movie cheerleader (once again, see Night of the Comet) and she is actually the more level-headed of the two.  Her reactions to what is going on range from fear of her situation to bemusement over Winston’s sometimes stupid actions.  The fact that he comes after her is a huge deal to her and makes him not just a loser nerd in her eyes…until she finds out he was the one who got her into it by selling her to a pimp.  She thought she had been kidnapped.

Reeves, although playing a nerd, doesn’t really come off as that much of a geek in the movie.  Just like wasn’t a generic cheerleader, Eberhardt doesn’t make Winston a caricature, but more of a real guy.  A couple of the scenes even give glimpses to the action star that Reeves would become.

If you like 80’s high school comedies, which allowed teen characters to have more depth and reality than the current ones do, then The Night Before might be right up your alley (pun intended).  If this sounds interesting then I recommend you give it a try.

Note: this is the one dancing scene in the movie where Reeves' character has been slipped something in his drink, but doesn’t yet know what is going on with him.  Loughlin does a great job with her facial expressions during the scene, especially when he keeps trying to reassure her that her dancing’s okay.  This bit is a nod to Adventures in Babysitting’s “nobody gets out of here without singing the blues” scene.