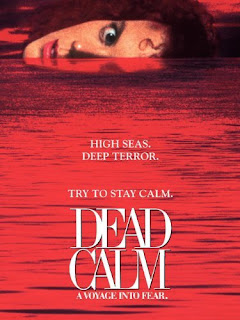 The Australian film Dead Calm, based on the Charles Williams’ novel of the same name, is the first movie in which I ever saw Nicole Kidman.  She was just 21 years old – pre-Oscar win, pre-Tom Cruise, pre-Hollywood, even pre-boob job, as we find out.  (Don’t worry ladies, there’s equal opportunity nudity for you from 22 year old, full head of hair, buff Billy Zane.)  The two, along with Sam Neill, are pretty much the only cast in this intense thriller, so even though Kidman was relatively new to films she gets a chance to shine.

Sam Neill is ’s answer to Jeff Daniels for his versatility in being able to play any role (or maybe I should say that Daniels is ’s answer to Neill since Neill started his career first).  In this film he is a grieving husband named John Ingram whose much younger wife Rae (Kidman) has killed their son in a car accident.  The two have taken their money and bought a large sailboat.  Their hope is their time at sea will allow them to heal, to reconnect, and maybe to start again on a family.

One day they come upon another boat that appears to be adrift.  They hail it and they see a man (Zane) rowing a small boat away from it toward their craft.  As he gets closer they can tell he is very upset – so much so that he keeps rowing right up to the point that he bounces his boat off theirs.  He scrambles on board and hunkers down, almost catatonic.  When he calms down enough he tells them his name is Hughie and that he’s been trapped on the disabled boat.  Making things far worse, everyone else on the small crew died from food poisoning and he’s been trapped there with the dead, unable to do anything.

John tries to convince Hughie to come back to the other boat with him to see if there is anything salvageable, but Hughie’s having none of that.  He’s off it and there’s no way he’s going back.  He finally calms down enough to drift off to sleep.  This suits John just fine because he’s not fully sure he believes the story.  He tells Rae to get their shotgun to protect herself while he goes to the other boat.  She thinks John is being paranoid.  What John finds on the other boat lets him know that not only was he not paranoid, he wasn’t paranoid enough.  He tries to get back to his own boat, but Hughie takes control of it, starts the auxiliary motor, and drives it away, leaving John behind.

This is where things kick into high gear.  John goes back to the other boat to try to get the motor repaired enough to follow.  He soon discovers a bigger issue – it’s slowly sinking.  Meanwhile, it’s not like Rae can hide from Hughie on the first boat, and it’s not like she can do much to get back to John without Hughie seeing her.  Rather than a traditional cat and mouse game where he stalks her, Rae pretends things are fine.  Once they are out of sight of the other boat Hughie calms down considerably.  Rae quickly becomes aware that Hughie is attracted to her and she tries to play along in order to get rid of any suspicions.

One of the great things about this film is Kidman and Zane have palpable chemistry and at a certain point we realize that Rae might be just as attracted to the much-younger-than-her-husband, dangerously sexy Hughie.  What might he “make her” do while they are all alone on the boat?  How far is she willing to go to continue the charade, and how far can she go without the charade becoming a reality?

The plot makes this much more than a “can the husband rescue the helpless wife” movie.  With the boat that he is on sinking, one might just as much ask if the wife can rescue the husband.

Zane is not in Gary Oldman’s class when it comes to playing unhinged characters, but he has done it a fair amount of times in his career.  Dead Calm allows him his first really good chance to show what he can do, and he nails it.  The title of the film has multiple meanings, from the primary one meaning a complete lack of wind that leaves a boat stranded on the water, to the separate words “Dead” and “Calm”, but my favorite is how all three characters are dead calm in their emotions at certain points, especially Zane’s.

This is not a gory film, which is why I referred to it as a thriller rather than horror.  It keeps you on the edge of your seat with tension in many scenes.  Kidman, Neill, and Zane all do great jobs with their characters.  There is a bit of a clichéd ending, but it was actually added to give closure to test audiences who did not like the ambiguity of the original ending.  Unless you hate thrillers I highly recommend this film.

Note: the video below contains a scene of Nicole Kidman and Billy Zane from Dead Calm.  It does show one way that Kidman’s character tries to take back control of the boat, but it doesn’t show the outcome of it, so it should not be a spoiler for you.  To still get a look at Kidman, and to avoid even that hint, just watch the first minute of the scene.