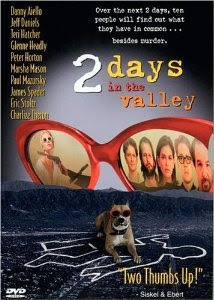 After Pulp Fiction came out in 1994 any film that featured intersecting narratives got branded as a “ripoff” of “Tarantino’s idea”.  Of course, he was hardly the first person to use this story device in a film – watch Robert Altman’s 1975 film Nashville, 1992 film The Player, and 1993 film Short Cuts, for instance.  Usually any charges of a film being directly related to Pulp Fiction because of its story structure can be ignored, but in the case of 2 Days in the Valley that might actually be correct.  It came out only two years after Pulp Fiction – enough time to develop and shoot a film based on the popularity of another.  It features at least a dozen familiar faces playing characters in and around whose lives end up connecting over the course of 48 hours.  Among those faces is Charlize Theron.  Other than an uncredited appearance in a horror movie sequel, this was her first film role and also the first film in which I ever saw her.

I’m not going to try to lay out all the overlapping backstories and how everyone is connected to everyone else.  You’ll have to watch the movie for that.  I’ll just describe the basics of how the characters are introduced.  I’ll also be referring to the characters by the names of the people who played them, since there are so many to keep track of.

James Spader (sex, lies & videotape) and Danny Aiello (Do the Right Thing) are hitmen.  One night they break into a house in the valley outside .  They inject Teri Hatcher (Tango & Cash), who is sleeping, and kill her husband Peter Horton (thirtysomething).  Hatcher doesn’t wake up because the injection knocked her out.  When she does finally come to and finds her husband dead beside her in bed she freaks out, runs outside, and manages to flag down two passing cops Eric Stoltz (Mask) and Jeff Daniels (Pleasantville).  Stoltz is sympathetic to her plight, as well as being a fan who recognizes her as an Olympic skier.  Daniels on the other hand, has serious anger management issues and hates most everybody, especially minorities, and he feels Hatcher knows more than she’s letting on.

Meanwhile, after the job, Spader shoots Aiello so he can have the payment for the hit all to himself.  Aiello, correctly not trusting Spader, was wearing a bullet proof vest so he survives and goes after Spader.  He needs transportation so he takes art dealer Greg Cruttwell (Naked) and his assistant Glenn Headly (Dirty Rotten Scoundrels) hostage.  He also cooks them dinner.  Greg had already called his sister Marsha Mason (The Goodbye Girl), who is a nurse, to come take a look at Aiello.  On her way there she meets Paul Mazursky (Down and Out in ), a man looking for someone to take his dog so he can commit suicide in peace.  Mason feels sorry for him and doesn’t want to leave him alone, so she takes him with her.  Both of them join the other two as Aiello’s hostages/dinner guests.

After checking in with his Swedish girlfriend Charlize Theron, Spader goes to get his money for the hit, but runs into detectives Keith Carradine () and Louise Fletcher (One Flew over the Cuckoo’s Nest).  A little later Stoltz also happens on the scene.  Before Spader can kill Stoltz Theron shows up.  She just had a knockdown, drag out fight with Hatcher (for reasons I will not spoil), and she is injured because of it.  Guess who else is closing in?  Aiello and his hostages.

With all the characters running around it would be easy for someone to phone in their performance.  I didn’t really see anyone doing that, but I did notice a few of the performances as standing out from the others.  This is probably Hatcher’s best film role.  Mazursky, who was a writer/director who acted occasionally, does a good job as a man at the end of his rope, only holding on because he can’t bear to abandon his dog to fate.  Daniels plays against type as an angry, racist cop.  And, of course, Theron made a great first impression, not just because of her beauty, but also because of a fight scene that she and Hatcher had.

Even by the mid 90s women were still not really shown as athletic or having fighting ability in movies.  Films tended to either have them be martial arts masters or just had them in hair pulling contests that devolved into something approaching mud wrestling.  In this film both Hatcher, whose character is an Olympic-level athlete, and Theron, whose sheer size gives her a physical advantage over Hatcher, engage in a realistic looking fight.  It may not sound like much now, but it was kind of a big deal to see something like that back then.

SPOILER WARNING FOR THE FATE OF AIELLO’S CHARACTER

I wanted to point out a fun joke regarding something Aiello says, but it also reveals his fate in the film.  At the end when he is leaving town with the money from the hit he tells the person he’s with that maybe he’ll open up a pizzeria in .  Some of you get that joke, but for those who don’t Aiello played a pizzeria owner in 1989’s Do the Right Thing.

2 Days in the Valley is a movie that keeps you watching in order to find out what is going to happen to all the myriad characters in it.  Who’s going to live?  Who’s going to die?  How will characters react when they come face to face?  Will they fight, will they hook up, or will they try to kill each other?  All of this is answered with occasional moments of twisted humor.  If this sounds interesting then I recommend you give this film a try.

Note:  the video below shows the fight between Hatcher and Theron.  Theron’s character insults both Hatcher’s character and her dead husband so the game is on.  I won’t spoil how they came to be there.