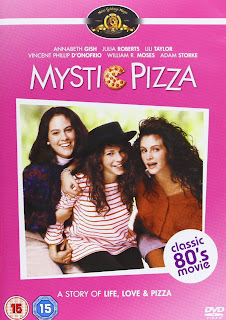 Before Pretty Woman made her a household name, and before she got an Oscar nomination for Steel Magnolias, I first saw Julia Roberts flash her famous smile in 1988’s coming of age film Mystic Pizza.  And playing a younger brother in this movie was a seventeen year old Matt Damon in his big screen debut.  This film also features early performances by Lili Taylor, Annabeth Gish, and Vincent D’Onofrio.  Roger Ebert noted in his review that this film might one day be better remembered for the talent within it than for the movie itself.  I think he pretty much nailed that prediction.

I’m cheating a little bit on this movie.  Back in my parent post for this category I set some rules for how to limit the number of movies by saying that I had to remember the person from their performance.  Well I certainly remembered Julia Roberts, but I did not remember Damon.  He only has a single line in the film, although he is in the background at other times.  However, when I later saw him in 1996’s Courage Under Fire and 1997’s The Rainmaker I recognized him, but didn’t know from where.  Thankfully I discovered IMDB in 1997 so I was able to remind myself he was in Mystic Pizza.  I’ve since watched it again and he looks really young. 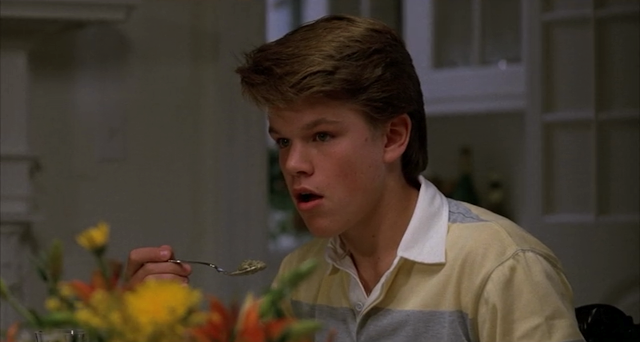 Mystic Pizza tells the story of three young women working in a pizza parlor by that name.  It is located in Mystic, , although most of the film was shot next door in .  There is a large Portuguese sub-population there and these three women are part of it.  It plays an important role in the film.  By the way, I worked with a woman of Portuguese heritage from and she swore by the Portuguese style pizzas she grew up with.

Kat Araujo (Annabeth Gish) is the “good sister”.  She’s intelligent, has been accepted to Yale, and seems to have things figured out.  Daisy is the “bad sister”.  She has no interest in college, enjoys sex and lots of it, and her only goal is to get the hell out of Mystic.  Their friend Jojo Barboza (Lili Taylor) doesn’t want to commit to settling down and marrying her boyfriend Bill (Vincent D’Onofrio), which causes both a lot of anguish – him because he wants commitment and her because he refuses to have sex with her until they are married.

In fact, all three have guy problems.  Daisy has started seeing a rich kid (Adam Storke) who must have crossed more than one set of tracks to end up meeting her.  And the “good girl” Kat?  She’s fallen in love with the 30 year old husband (William R. Moses) that she babysits for.  All three go through their ups and downs while working for a woman (Conchata Ferrell) who runs a pizza place where the specialty is an ingredient she won’t reveal, even to these girls.  It’s a running joke in the movie.

As you might expect, much of the movie shows the three trying to deal with the men in their lives, while suppressing the realization that they themselves are the causes of their own problems, not the men.  It’s for that reason (the women are the ones causing their own problems) that this man likes this chick flick.  Sure, the men don’t get off scott free, either, but at least they aren’t the generically evil males that populate your standard chick flick or Lifetime movie.

I would not call this a romantic comedy, although there are funny moments in it.  It’s more the coming of age story I described it as up above.  The appeal of the movie comes from the charm of the three female leads.  And among them Julia Roberts really stands out.  You can see elements of her pre-makeover Pretty Woman character in Daisy.  And she’s definitely got the famous hair and smile in this film (although the hair is darker).

By the way, there was and is a real pizza shop named Mystic Pizza.  The screenwriter saw it while in Mystic, and decided it would make a good setting for this story.  Reportedly it became very popular after this film came out.

If you are looking to see some early performances from a number of familiar faces, as well as watch a charming story, then you could do a lot worse than Mystic Pizza.  If it sounds interesting, then I recommend you give it a try.

Note:  I couldn’t find the clip from the film showing the dinner scene with both Roberts and Damon in it.  This is one of the trailers for the film.