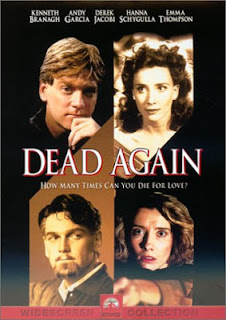 It’s not too common for me to be completely blindsided by a reveal or twist in a movie when much of the action hinges on the fact that we don’t know yet what is going on.  Whether it’s because I subconsciously recognize little clues and hints, or whether it’s simply the sheer number of movies I’ve seen, I tend to correctly anticipate twists.  It’s a pleasure then when I encounter a movie with a twist that completely surprises me.  I love that.  Now imagine a movie with two huge twists, neither one of which I remotely saw coming.  Dead Again is that film.  (Don’t worry – I won’t be spoiling them in this post.)  It features great double mystery stories – a murder in the 1940s and an amnesiac woman in the present – and the possibility that the two are connected somehow.  This film is a psychological thriller with honest to God genuine goose bump raising moments.  It’s also the first movie in which I ever saw Kenneth Branagh and Emma Thompson, who play the double leads.

The film opens in black and white as we see newspaper clippings written by crusading reporter Gray Baker (Andy Garcia) condemning noted Los Angeles composer/pianist Roman Strauss (Branagh) for the murder of his wife Margaret (Thompson) with a pair of scissors.  Roman maintains his innocence throughout, but he is sentenced to die for this crime.  He says he has something to tell Gray just before he is electrocuted.  He whispers in Gray’s ear, but we do not hear what he says.  Did he confess?  Did he say who really did it?  Whatever it was, Gray is visibly shaken and never reveals the secret.

In the present (and in color) a woman wakes up from a horrible nightmare.  She is in a nunnery in .  She arrived there with no memory of who she was or what happened.  They have named her Grace.  This role is also played by Emma Thompson.  The nuns call private detective Mike Church (Branagh again) for help.  He was an orphan that was raised there.  They hope he can find out who she is.

They release her into his custody, but he keeps hitting brick walls.  She still can’t speak (doctors say it is psychological trauma causing this, not anything physical), but she did shout out something like “disher” when she woke up from a bad dream.  Mike posts her photo in the paper asking for anyone who knows her to contact him.  He soon gets a call from a hypnotist (Derek Jacobi), who suggests that he might be able to unlock what is trapped in her head.  They give it a try, but Grace starts relating events from the 1940s – well before she was born.  In fact, she is reliving events from the marriage of Roman and Margaret Strauss.  The “disher” she shouted out?  The brand of scissors Margaret was killed with was “Die Schier”.

Even though Grace has her voice back, Mike doesn’t know what to make of this.  He consults a disgraced psychiatrist who confirms that past life experiences can occur under hypnosis.  When we first saw this man, both I and the person with me said, “Hey, is that Robin Williams?”  It was.  He deliberately took a small supporting role and withheld his name from the opening credits so that people would not be expecting to see a Robin Williams comedy.  While Dead Again is a thriller, there are little moments of humor in the film (Mike’s bad driving, the hypnotist’s use of his practice to also ask patients about any antique furniture they might remember being around when they were younger, etc.)  The clip at the bottom is one where a man (Campbell Scott) shows up saying he knows Grace.  It has both thrills and humor in it.

With the confirmation of the psychiatrist to back up the hypnotist, Mike looks into the Roman and Margaret Strauss murder case.  Their marriage had started out like a storybook, but had grown sour.  Roman had writer’s block and was distancing himself from her.  She caught the housekeeper’s son stealing from her and demanded they be kicked out of the house, but Roman, who had known the housekeeper before he met Margaret, took the housekeeper’s side.  No wife wants to come in second to another woman when it comes to her husband’s loyalty.  Margaret then started a flirtation with Gray Baker, the very same reporter whose articles would later condemn Roman in the court of public opinion.  This throws his actions into a whole new light.  Did he truly think Roman killed Margaret and Gray was trying to get justice for the woman he loved?  Did Gray have something to do with either Margaret’s murder or manufacturing evidence that Roman did it out of anger for not being able to have her?  What did Roman say to Gray just before he was executed?

The further and further the hypnotist digs into Grace’s memories of Roman and Margaret, the more of the past that is revealed.  Of course, how much of any of this can we believe?  A big moment for Margaret comes when she recognizes Roman as looking exactly like Mike and herself looking exactly like Margaret.  She frankly becomes scared of Mike.  How could he and Roman possibly be connected?  Why would he ever want to hurt her?  One of the goose bump moments comes when the two are arguing.  Mike is frustrated and practically shouting “I’m not Roman!” – and then he angrily refers to her not as Grace…but as Margaret.

Despite reservations he now also agrees to be hypnotized.  This is when the first of the big reveals is given.  I was completely and utterly unprepared for what was shown.  Again, both I and the friend I was watching it with kind of turned to each other and said, “Wait, that means….”  We both just concluded with a “wow”.

By this time Grace has fled from Mike’s presence.  He isn’t successful initially in finding her, but he does discover that Gray Baker is still alive.  Maybe if Mike can convince Gray to reveal what Roman told him he can figure out who murdered Margaret and with this information he might be able to allay Grace’s fears in the present.

The second big twist, which I also did not see coming, is revealed towards the end of the movie.  In both cases these twists did not come out of nowhere; they just felt like they did.  If ever there was a movie ripe for a second watch right after completing it the first time, it’s Dead Again.  On a second viewing you see a number of moments that point right to both of these twists.  They are easy to spot when you know the truth and are looking for clues, but fit seamlessly into the movie when you are not.

This is the very next film that Branagh directed after he became a critical success with his first film – 1989’s Henry V.  (You can read my review of that here.)  There are some in jokes in the movie, such as Roman’s prisoner number being the date of the battle of , as well as a magazine cover showing Laurence Olivier in the role of Hamlet.  Branagh received comparisons to Laurence Olivier for adapting, directing, and starring in Henry V.  After then directing and starring in Dead Again he received comparisons to Orson Welles.  This time around he was directing an original screenplay from Scott Frank, who would go on to write the screenplays for Out of Sight (1998) and Minority Report (2002), among others.

Branagh and Thompson, who had a small role in Henry V, had married during that filming and were still husband and wife when making Dead Again.  (They would go on to make 1992’s Peter’s Friends and 1993’s Much Ado About Nothing together before divorcing in 1995.)  I did not see Henry V until several years later, so I had no idea who they were.  In fact, I had no clue they were even from the   Their American accents were completely unremarkable to me until I later realized they were not Americans.  Unlike some husband/wife pairings, they have good chemistry on screen, especially when playing both the romantic early scenes of Roman’s and Margaret’s marriage and then the contrasting scenes where their union is falling apart.

In addition to getting the role of the female lead in this film, Thompson also got another bonus.  She and one of Dead Again’s producers, Lindsay Doran, discovered they both loved Jane Austen.  This led to them collaborating on 1995’s Sense and Sensibility, which garnered Thompson an Oscar for her screenplay.

I can’t really think of a reason for someone to dislike Dead Again, except maybe if you don’t like twists at all.  It’s a well-constructed and well-acted, double mystery, thriller.  I highly recommend you see this film.

Note: this is the scene I mentioned above where a man shows up claiming he knows Grace.  This will show you what Branagh and Thompson looked like in their modern day roles, as well as give you a taste of the film’s quick shifts from drama to tension to humor.