Book – 150 Movies You Should Die Before You See 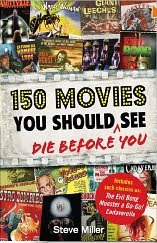 No, that title is not a typo.  It is having fun with the 1,001 Movies You Must See Before You Die books.  The title appears on the cover as “150 Movies You Should See” then has the little insert here sign poking up between “Should” and “See” with the words “Die Before You” written below it.  It then has a circle that says “Includes such classics as: The Evil Bong, Monster a Go-Go!, and Cadaverella”.  This 2010 book is written by Steve Miller (not the musician) in an entertaining, fun, and very knowledgeable way.

Miller starts out by saying that he’s one of the people who enjoys watching movies that most people would consider bad.  He does this because they can be entertaining in a “so bad it’s good” way.  He writes that even he has trouble finding anything to like about some films, though.  He cautions that he is not trashing movies in this book; that in fact some of his favorite films of all time are in it.  He is doing the book more to have fun with these films than anything else.

The layout of each movie’s entry is done to be both informative and entertaining.  Each starts with the title, production company, year, producers, director, writers, and main cast.  He then has a brief overview of what the movie is about, followed by a section titled “Why It Sucks”.  He then gives a Thumbs Down rating from 1 to 5 thumbs (5 being worst).  The next section is “The Crappies” where he gives out humorous awards to the makers of the film.  “They Really Said It” contains a usually humorous for how bad it is quote from the film.  A “Betcha Didn’t Know” section follows with a couple items of real trivia about the film or participants.  Finally, he has a “Trivia Quiz” that provides some additional info.  There are also some movie posters shown, although not for every film.

Miller divides the 150 films into fifteen chapters, with differing amounts of entries in each one.  He has fun with the categories.  They are:

I disagree with some of the ones he included.  For instance, I liked Kung Fu Hustle quite a bit.  He has it in his Mysteries of the Orient chapter because the pop culture references don’t translate well.  I also liked Moonraker.  He includes it because it bears no resemblance to the Fleming novel it was based on.  In both cases he gives them only one thumb down and even points out that each is entertaining.

For those 1,001 Movies folks who may be wondering: yes, there are a couple of entries common to both books.  1934’s The Black Cat is in the Kinda-Sorta Based on the Book chapter and Suspiria is in the Gory, Gorier, Goriest chapter.  There is also an entry in Creaky Classics titled Zombies on Broadway that is a spoof of the 1,001 Movies entry I Walked with a Zombie – right down to having Darby Jones and Sir Lancelot playing the exact same roles in both films.

This book will certainly have films that you have probably not heard about in it.  I can almost guarantee you that you will have seen some of the films in it, though.  In the interest of full confessions I did a count and I have seen a total of 25 of the 150 movies.  While I did watch some of them to find out if they were really as bad as people said they were (i.e. Ishtar, Santa Claus Conquers the Martians) I can’t say that about all of them.  I did rent some of them hoping for a good time (and for some I did have one.)

As much fun as it is to read about the movies I knew, it was even more fun finding out about movies like Monsturd, Creature with the Atom Brain, Trapped by Television, Die Hard Dracula, Return of the Living Dead: Rave to the Grave, Werewolf in a Girl’s Dormitory, Suburban Sasquatch, and Rockabilly Vampire.

This isn’t the sort of book you pick up in order to find out what films to watch (unless you like really bad movies.)  I won’t be checking entries off in this one as I see them.  This is the kind of book you read if you like having fun with movies, like learning about things you do not know, and like sharing that fun with others, maybe by renting one of these entries and watching it as a group.