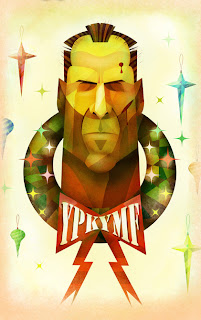 I’m old enough that I saw Die Hard during its original run in the theaters.  I convinced my friend to go see it with me.  Even though it had a great trailer (“It will blow you through the back wall of the theater!”) he just didn’t think it would be that good.  The theater was only about 1/3 full on opening night, so a lot of other people probably thought it wasn’t going to be that good, either.  Well, it turned out to be one of the best, if not the best, action films ever made.  It’s number 1 on my list of the best non-traditional Christmas movies.

One of the reasons that not a lot of people went to see it initially was because it starred Bruce Willis.  Now a lot of you will probably have a hard time imagining what this was like, but at one time Bruce Willis was not an action star.  “That goofy guy from Moonlighting? In an action movie?  No way.”

You have to understand: this was the 80s.  Action films starred people like Arnold Schwarzenegger or Sylvester Stallone – guys with lots of testosterone and even more muscles.  They were larger than life characters.  Willis was just an ordinary guy.

And that’s one of the things that made this film so great.

When he was in danger, you really felt he was in danger.  He gets hurt.  He gets worn down.  You didn’t see those kinds of things in a Schwarzenegger or Stallone movie.  People didn’t connect with those two the way they did with Willis when Die Hard came out.  He was almost one of us.  Unfortunately, as the sequels went along he moved more and more into Schwarzenegger territory in regard to the stunts and the plots, but the majority of the action in the first film is more human than superhuman.

Another thing a great action film has to have is a great villain.  Die Hard has this in spades with the German, Hans Gruber.  It was Alan Rickman’s screen debut and what a debut it was.  He wasn’t your normal two dimensional psycho, yelling threats and ranting.  The film establishes this early on with a little throw away line in the elevator when he recognizes where the Japanese executive bought his suit.

Even though most people know the basic premise, I will explain it here for those who don’t.  cop John McClane (Bruce Willis) has flown into on Christmas Eve to visit his estranged wife (Bonnie Bedelia) and family.  He meets her at a Christmas party being held at the Nakatomi Corporation headquarters where she is an executive.  A group of men enter the building and quickly and efficiently take it over and cut all communications.  (Kids - this was in the dark ages when nobody had cell phones to call for help.)  They hold the corporate execs hostage, while McClane manages to sneak out without being noticed.  He becomes “the fly in the ointment; the monkey in the wrench.”

I like heist movies and yet another thing that makes this movie great is that you can almost root for Hans’ plotting to succeed.  It’s an incredibly complex plan that unfortunately requires people to die.  It’s a great moment when you realize that Hans has been one step ahead of just about everybody all along.

And by the way, how many action films use Beethoven’s Ode to Joy as a major piece of music in their films?  I think the count would be one.  Throw in the very first Christmas rap song (Christmas in Hollis by Run D.M.C.), as well as some more traditional Christmas songs, and you’ve got a great soundtrack, too.

Some of the best scenes are the exchanges between McClane and Hans over walkie-talkies.  This makes the scene where they happen to run across each other face to face great.  I love the scene because it shows just how smart Hans is.  When he sees McClane he knows who he is and immediately adopts an American accent.  He says he was at the party and managed to sneak away.  You don’t know if McClane believes him or not.  They show a scene where the two start smoking.  McClane introduces himself, which is a smart way to get Hans to introduce himself.  The scene cuts to Hans, who says he is “Bill Clay”.  McClane looks at a directory of the building that is behind Hans and sees “Wm Clay 29”.  Hans was so smart that he anticipated McClane wanting to know his name, he picked one that would likely be at the party on the 30th floor, and he knew that “Wm” was short for William and that Americans commonly changed it to Bill – and he did it all in a flash before McClane saw him looking at the directory.

On a related note, this was a perfect example of why Pan and Scan versions of movies sucked.  When this came to VHS tape I immediately rented it to see it again.  I was anticipating this scene and was hugely disappointed because the building’s directory didn’t make it into the smaller frame.  It ruined the best part of the scene because now you didn’t know just how smart Hans is.

You may be wondering why, if I am gushing so much about this movie, I am only giving it four stars out of five.  Why not five out of five?  Well, like all action movies you’ve got some pretty big areas where you have to suspend your disbelief.  McClane is supposedly trapped in the few floors at the top of the building because the elevators have been shut down.  We see him running up the stairs to higher floors many times, but never once does it occur to him to simply go down the stairs.  Yes, there are bad guys in the lobby, but he doesn’t know that, and they are far fewer in number than at the top of the building.

Other things – a SWAT team tries to get into the building by cutting through a metal lock….on a glass door.  There’s a “come back to life for one last scare” that was already very clichéd even back in the 80s.  There’s a van that mysteriously appears in a truck where no van was before.  There’s an obvious stunt double for Willis in several of the fight scenes.  Etc. Etc.  None of these are huge, except maybe “why doesn’t he just go down the stairs?”, but they add up.  If I gave "half star" ratings then this movie would be four and a half out of five.

If you have somehow never seen this film then I highly recommend it.  Even if you hate action movies, I would still recommend this one.  It is truly one of the best around.

[Note – you can read about the best non-traditional Christmas movies at this link.]