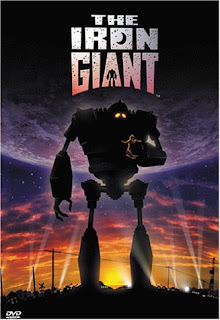 In the summer of 1999 Warner Brothers responded to all of the parents who had been crying out for a quality animated movie that they could take their whole family to; one that wasn’t the toy advertising that Disney had become.  Warner Brothers selected a well respected story – The Iron Man – and hired up and comer Brad Bird to direct the movie.  The result – parents avoided this movie like the plague.  “No singing animals?  My kids won’t want to see that.”  The result was that a truly great movie was hardly seen at all.
In fact, Warner Brothers Animation gave up after this and released movies like Osmosis Jones and then just went into the direct to video market.  Brad Bird was scooped up by Pixar and went on to do The Incredibles (2004) and Ratatouille (2007).  You may have heard of them.  He is now directing the live action Mission Impossible - Ghost Protocol movie.  Not impressed by those credits?  How about this?  He created the 1990 Do the Bartman music video.  I bet you’re impressed now.
In 1968 Ted Hughes, poet laureate of and Sylvia Plath’s widower, wrote the story The Iron Man.  In 1989 Pete Townsend wrote a concept album based on this story.  In 1999 it came to theaters as a movie.
The movie’s story is set in the 1950s in during the height of the communist red scare. A literal iron giant robot appears in the countryside.  He is found by a young boy named Hogarth Hughes.  He tries to keep the giant a secret, but his mom and her boyfriend find out.  A bond forms between the boy and the robot.  Of course, the government finds out about the robot and gets scared.  No one knows its origins, so it is thought to be something the Soviets built.  Conventional weapons won’t work on it, though, so there is the threat that the government will actually use nuclear weapons to destroy it.
There is both laughter and tears in this movie.  I laughed for minutes at a scene involving jumping in a pond.  I shed a couple of tears toward the end.  There’s a redemptive ending, though; kids won’t be traumatized by it.
The movie has the voice talents of Jennifer Aniston, M. Emmet Walsh, Harry Connick Jr., Cloris Leachman, John Mahoney, and Vin Diesel as the Iron Giant.
Some paranoid people felt that this movie was just trying to brainwash kids into thinking all guns are evil.  I don’t share this sentiment.  Yes, there is a message that weapons of all kinds are bad - when used out of fear, anger, or retribution.  Unless you’ve got a “rec room” like Burt and Heather Gummer in Tremors (1990) then the message shouldn’t bother you.
The Iron Giant is a movie that works on all levels.  It can be watched by the whole family, but at the same time adults don’t need to have a child around as an excuse to watch it.  It’s not just one of the best animated films of all time; it is a great film of any kind.  I give this my highest recommendation.
Chip’s Rating: 5 out of 5 stars