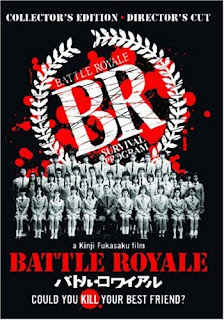 Battle Royale is a Japanese film that has struck a chord around the world.  There has been talk for years of an American remake, but because of the subject matter I don’t know if it ever would be made.  The closest we will come in the near term is the upcoming movie The Hunger Games (2012), whose plot borrows heavily from Battle Royale.  (Click here for my book review of The Hunger Games.)
Battle Royale is set in the near future in .  Society has begun to break down and students are becoming lawless.  In order to stem this tide the government passes the Battle Royale Act which says that each year a ninth grade glass will be randomly selected to be taken to an island where the students will fight for their lives.  The student that manages to survive goes free as an example to all other students that the government is serious about maintaining order.  One more thing – the danger for the students is not wild animals or starvation; it is each other.
We see the class in happier times at a school event.  They establish the various cliques – jocks, popular girls, loner girl, geeks, etc.  The 42 students get on a bus for what they think is a school event, but wake up in a classroom on the island.  Their teacher explains what has happened to them.  He plays a video of a very perky spokesmodel explaining to the students the rules of how they have to kill each other.  It’s a funny moment amid the drama.
The rules are that each one is given a backpack with some food, water, and a random weapon in it.  It might be a machine gun.  It might be poison.  It might only be a knife.  They must use what they have to kill the other students on the island.  The one survivor gets to go free.  The catch – they have only three days to do it or devices attached to them will kill any remaining students and then no one survives.
With 42 students you don’t get to know them all.  The movie does spend time with the popular girl and geek cliques that still re-form on the island.  The loner girl might be my favorite character.  It is as if she finds out what she was born to do.  She steps into the fight with no reservations.  There’s also a tough guy who is mowing down the competition.  One girl uses sex to seduce boys and then kill them afterwards.  After a few kills for each of these characters you actually start getting a sense of anticipation about what will happen when these various champions finally run up against each other.  Who will win?
Some people decide not to participate at all.  A couple commit suicide rather than let the government turn them into animals.  The geek clique is trying to find a way to hack the system to remove the devices.  The popular girls set up homemaking in a building they find and try to ignore what is going on.  How long can the people in these groups trust each other, though?  The tagline for the movie is “Could you kill your best friend?”
As I mentioned, the subject matter would seem to make an American remake unlikely.  Ninth grade students killing each other and having sex with each other?  At the very least they would age all the characters up.  They would probably remove the sex.  They would reduce the number of students considerably.  The result would probably not be much of a movie.
Battle Royale has one big star – Takeshi Kitano – who has written, directed, and acted in many movies.  One of the students is played by Chiaki Kuriyama, who showed up in Kill Bill Vol. 1 (2003) as the schoolgirl assassin that The Bride has to fight.  I believe she got the role because Tarantino saw her in Battle Royale.


Note – there was a sequel made that I have not seen.  Everything I heard about it said that it was nowhere near as good as the first one.  If someone has seen it, please let me know what you thought of it.
The subject matter could be disturbing to some, so the movie is not for everyone.  There is actually some emotional depth to the movie, especially when it harkens back to the happier times for the students.  For anyone who is thinking about seeing it, this movie is highly recommended.
Chip’s Rating: 4 out of 5 stars