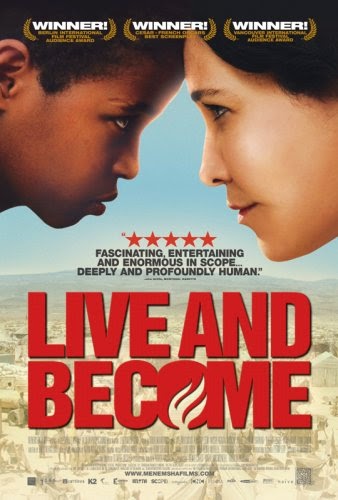 Live and Become has a curious mixture of nationalities behind it.  It’s co-written and directed by Radu Mihaileanu – a Romanian man.  It’s the story of a black Christian boy pretending to be an Ethiopian Jew growing up in , being raised by adoptive Moroccan Jews who speak French.  Anyone who thinks Jews are a specific race as opposed to simply being followers of a religion will probably have problems with this film.  As the opening narration explains there have been black Jews in for thousands of years.  In 1985 (when the movie starts) is conducting rescue missions to save as many of them as they can and to bring them to .  Will the people there welcome them, though?


Things are really bad in in the mid 1980s.  Thousands of people have walked over the border into and are living in refugee camps.  The Israeli government decides to rescue the Jews that are among them.  A Christian mother with a young boy comes upon a Jewish woman whose son has just died.  In a moment the Christian mother makes a decision and she asks the Jewish mother to pretend that her son is the other who has just died.  She tells her son “Go, live, and become.”  She knows that the only hope for her son is to escape their current situation.

Not long after reaching the boy, now known as Schlomo, loses his pretend mother.  Before she dies she tells him to never reveal he is not Jewish because he will be sent back to .  He is soon adopted by Moroccan-by-way-of-France Israelis Yoram (Roschdy Zem) and Yael (Yael Abecassis).  To say he has a hard time fitting in would be an understatement.  He has never seen running water.  He can’t sleep on the bed because it’s too soft, so he sleeps on the floor.  And he’s not doing a very good job of pretending to be Jewish.  He acts out quite a bit.  He finally comes under the wing of an understanding rabbi, though.

The film transitions to Schlomo as a teenager.  He’s smart, but he’s still not fitting in as well as others.  We see news clips of how the black Jews are being ostracized in .  As one of them points out, they were persecuted in for being Jewish and they are being persecuted in for not being Jewish, in the opinions of a lot of white Jews.

This is personal for Schlomo since he likes a white girl and starts to date her.  Her father is not happy about this and it’s obvious he does not consider Schlomo to be a real Jew.  Of course, the fact that the father is correct haunts Schlomo.  Because he loves this girl and wants to be with her Schlomo enters a debate competition on the Torah in order to show the father that he can be the best Jew possible.  I won’t spoil what happens here with the competition, with the relationship, or with Schlomo’s secret.

The movie then has a smaller third part with Schlomo as an adult doctor who is serving in .  Despite all that he has achieved he still didn’t feel like he truly belonged in and he has chosen to return to his roots.  To do this he had gotten into a disagreement with his adoptive father over wanting to go to medical school in instead of serving in the Israeli military.

Live and Become does not shy away from showing the fact that many Jews, victims of religious persecution themselves, were just as capable of racist persecution of others.  For instance, as a boy other parents think Schlomo will spread disease to their children in school and bring down test scores for the whole class.  They don’t want him admitted.

It’s not all horrible, though, because Schlomo’s adoptive mother really tries to get through to him, and the rabbi plays a very important and influential role in his life.  And of course, the girl he falls in love with also loves him back, but Schlomo knows that if she marries him she will be cast out by her family, even considered to be black just for marrying a black man.

This is a well done film.  All three actors who play Schlomo at different ages do good jobs, with the teen (Moshe Abebe) being the standout for me.  I just checked IMDB and he has never been in anything else, though, which surprises me.  If this film sounds interesting to you then I recommend you give it a try.