Here are the Unofficial Changes for the 2014 Edition of the 1,001 Movies You Must See Before You Die 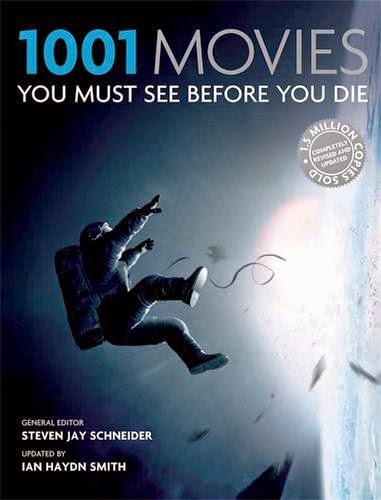 Believe it or not I was finally going to post a movie review again tonight, but when I checked email I saw that a comment had been left on the Books section I maintain on the 1,001 Movies wiki.  Lo and behold an anonymous commenter (Sep 20 edit: the person who deserves credit for the first notice is Andy Stout;  see his comment below) left what he or she said were the upcoming changes for the 2014 edition which they had gotten from the official site.  The book doesn’t officially come out for two more months, so I was slightly skeptical, but very intrigued.

I went out to the official site and did not find anything listing changes, but I noticed that the list of the current entries did include one of the new ones – 12 Years a Slave.  I tend to discount the list on the official site since whenever I had looked at it in the past it was always a few years out of date.  In this case though, I checked and several of the films I was told were added were indeed in the list at the site, and several of the ones I was told were removed were indeed not on this list.


I have not gone through entry by entry – I will wait until I have the physical book in front of me to compare with last year’s – but for right now I have little reason to believe the following updates I’m listing are made up.

I won’t get into numbering the new entries yet for a couple of reasons.  First, as I mentioned I am waiting until I have the official book in front of me to compare.  (I’ve found errors in their official website’s list and in their book’s indexes before).  And second, last year’s updates to the 1001 Movies Blog Club list used a different method of inserting additions than had been used in prior years.  It ensured that the order of the entries in the published book exactly matched the order in the numbered list, with the removed entries placed at the ends of their years.

Now that there are far fewer updates again, do we go back to the old method (just add new entries to the end of their years and number accordingly) or stick with the newer method (insert movies in place where they are in the book, shift the removed ones to the ends of their years, and renumber all subsequent entries)?  For what it’s worth, I feel that since we went to the effort of completely renumbering the list last year for the new method, that we should now stay consistent with it.  This means needing to wait until the book is published before being able to number them, though.

Of the new additions, there are five I have not seen: The Act of Killing, Blancanieves, Nostalgia for the Light, A Touch of Sin, and Wadjda.  I’ve never even heard of Nostalgia for the Light and A Touch of Sin.  I’ve heard good things about Wadjda and it’s been in my Netflix queue for a while already.  The concept of The Act of Killing sounded kind of goofy, but to be fair I never looked into it.  All I know about Blancanieves is that it is about a female bullfighter.

Of the eight new films I have seen, the only one that surprises me is Inside Llewyn Davis.  While some critics liked it, it’s definitely a lesser Coen Brothers film.  Maybe the editors felt that since they were removing the Coens’ No Country for Old Men they owed it to them to add their latest movie to the list.  Who knows?  I’d be willing to bet that this will be a “one and done” list entry and that it will be gone next year.

Of the films they are removing I’m not really surprised by any of them.  The Departed causes me to raise an eyebrow somewhat, but even that isn’t exactly a unique, special, or must see film.  The aforementioned No Country for Old Men has its fans – and like fellow removees The Departed, The King’s Speech, and Argo it won the Best Picture Oscar – but it never did much for me.

I will take this space to say “Good Riddance” to Bridesmaids.

So, moving forward with the assumption that these are the true changes, where can we find them?

The Act of Killing (2012) – Available on DVD and streaming on Netflix.  Note: this is for the theatrical version.  Netflix also offers a Director’s Cut of it Streaming only.  Until we can see the entry in the book we will not know for sure which version is the one the editors are adding.

Blancanieves (2012) – Available on DVD and streaming on Netflix