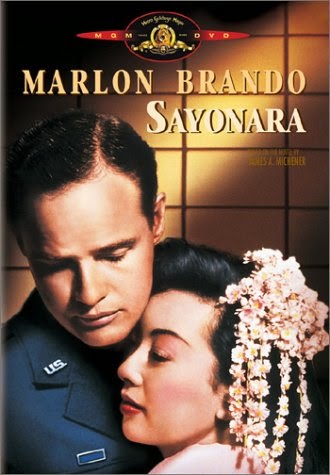 Sayonara is the oldest mainstream film I can think of that is openly supportive of interracial marriage.  It garnered a lot of notice from having big star Marlon Brando as its lead and from the 10 Academy Award nominations and 4 wins it received, including Best Supporting Actor for Red Buttons and Best Supporting Actress for Miyoshi Umeki.  The latter is the first Asian performer to ever win an Oscar (not counting 1956 winner Yul Brynner who was born in the Asian part of and was ¼ Russian Mongol).  This film, along with a few with similar themes that followed, is credited with loosening up Americans’ attitudes towards the concept of marrying outside your own race.


You may be thinking “It didn’t win any of the big Oscars?”  Well, Sayonara was nominated for Best Picture, Director, Adapted Screenplay, Cinematography, Editing, and Brando for Best Actor, but lost every one of them to The Bridge on the River Kwai.  There’s no shame in that at all.  The only category in which Sayonara triumphed head to head was Best Supporting Actor.  Nominee Sessue Hayakawa from Kwai, along with Miyoshi Umeki from Sayonara, were the first Asian performers ever nominated for an acting Oscar and both received them in the same year.  (This isn’t counting the aforementioned Brynner and 1935 nominee Merle Oberon, who hid her partial Asian Indian ancestry.)

Another thing that probably helped Sayonara was that it reflected reality: by one estimate more than 10,000 servicemen had defied the military’s ban on intermarriage while serving in WWII and .  James Michener, the author of the novel of the same name that this film is based on, was one of them.

Air Force Major “Ace” Gruver (Marlon Brando) is stationed in .  He’s more than a little prejudiced about the Japanese people so when his best friend in the Air Force, Joe Kelly (Red Buttons), tells him he is going to marry a Japanese woman, Gruver reacts badly.  Realizing that it’s about his friend, not him, be apologizes and even agrees to serve as Joe’s best man, despite the fact that he (Gruver) still agrees with the military’s ban on intermarriage.  (Watch for another friend played by James Garner in one of his earliest roles.)  Even though the Air Force won’t recognize the marriage as legal, Joe and Katsumi (Miyoshi Umeki) get married anyway for the best of reasons: they are in love.

As Gruver mentally adjusts to the idea he visits not just with Joe, but also with Katsumi and starts to learn about Japanese life.  As it often happens, it’s harder to be bigoted if you have personal connections with those you are bigoted against.  One day the star female performer in a show, Hana-Ogi (Miiko Taka), catches Gruver’s eye.  He’s impressed by her talent, and also by her beauty.  Even though he’s told that she will never talk to him because he is American, he waits by a bridge each day just to see her walk by.  She takes this as her due both as a beautiful woman and as a star, but she refuses to acknowledge him no matter how friendly his greeting.  Day after day she passes him by.  Then one day he’s not there.  And she notices.  And he’s not there the next day, either.  And it bothers her.  She’s “grown accustomed to his face”.

When next he approaches she agrees to talk with him, then finally to join him with visiting Joe and Katsumi, who are not living on the Air Force base since the marriage is not recognized.  Eventually Gruver and Hana-Ogi fall in love.  What’s he to do now?

Complicating matters is that parts of the neighborhood Joe and Katsumi live in are not very happy to have an American there, especially an American serviceman.  It’s still not that far removed from the end of WWII.  Tensions run high in some places.  And what’s Joe to do when he is ordered back to the ?  He isn’t allowed to take Katsumi with him, since the military doesn’t recognize the marriage.  Even though she is pregnant with their first child, they tell him he has to leave her behind.

The film makes no bones about the fact that the military’s ban on interracial marriages is a bad thing.  It shows the negative impact it had on lives.  There were probably many people who were in Joe’s shoes.  Both Red Buttons and Miyoshi Umeki did a great job as the husband and wife and they deserved their Oscars.

The only real negative I have with Sayonara is that for some inexplicable reason they cast Ricardo Montalban as a Japanese man, in a film otherwise filled with Japanese actors and actresses.  He plays the part with respect; it’s not a caricature, but it just doesn’t seem to make sense, unless Montalban was under contract and they had to use him in something.  A smaller negative is that Brando chose to use a southern accent in his role and the accent feels out of place.  Perhaps he figured a southern man was more likely to be bigoted.

These are both minor things for me, though.  I found this film to be good at getting the point across without being preachy about it.  It showed that prejudice runs both ways with some Japanese people not happy with Joe marrying Katsumi.  And it gives the audience a lead character that many could probably identify with and then it showed him learning and growing as his world expanded.  Unless you have to have tons of action, I highly recommend this film.