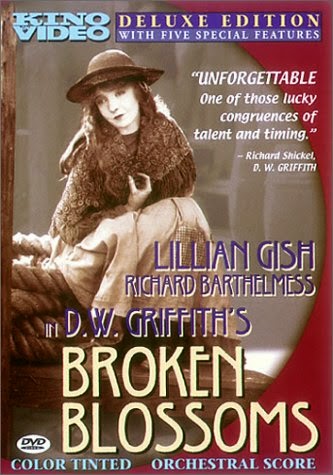 Director D.W. Griffith is nothing if not schizophrenic.  Just four years after making the epic The Birth of a Nation (about how the Ku Klux Klan supposedly saved from uppity black people) he comes back with the small character study Broken Blossoms which features a very sympathetic portrayal of an Asian man and his relationship with a white girl.  Even more surprising is that this film was made right in the middle of the “Yellow Peril” scare in the   The studio wanted nothing to do with this movie.  bought the rights to it from them and Broken Blossoms became the very first film ever released by United Artists, the company Griffith, Charlie Chaplin, Mary Pickford, and Douglas Fairbanks founded to give artists a way to get their movies released without having to bow to the powers at the big studios.  Despite what the studio thought would happen Broken Blossoms became a huge hit.


People watching this film nowadays can sometimes forget how far ahead of its time it was.  Instead they judge it by modern standards of political correctness and find it lacking.  First and foremost, the Asian character is played by a white man – a very common practice in entertainment then.  He’s not in “yellow face”, though, nor was he given any exaggerated features or mannerisms that would be denigrating to the race.  Second, a few times in the film the word “chink” appears in the intertitles.  It was a common term in use at the time.  In fact, this film is based on the short story The Chink and the Child from the 1915 Limehouse Nights collection by Thomas Burke.  An alternate title for Broken Blossoms was The Yellow Man and the Girl.  In addition to making the title a little nicer, also makes the character much nicer than in the story.

Cheng Huan (Richard Barthelmess) is a Buddhist monk in when he observes boorish behavior from some white sailors.  He decides that he needs to bring the word of peaceful Buddhism to the western world.  In the very next scene we see him years later a broken man.  He’s running a shop in the Limehouse district of London – a very seedy section of town.  In addition, he smokes opium.

About the only glimmer of light in his life is a teenage girl named Lucy (Lillian Gish) that he sees sometimes looking in the windows of his shop.  Huan admires Lucy’s pure beauty amidst all the ugliness.  What he doesn’t know is that she is just as damaged as he is.  She lives with her father, a boxer named Battling Burrows (Donald Crisp).  Burrows drinks too much and often takes a whip to his daughter.  Reportedly, audiences at the time were shocked at the film’s negative commentary on child abuse and the prevalence of it.

One day Burrows beats Lucy so badly that she ends up collapsing at the door of Huan’s shop.  He carries her upstairs and tends to her injuries.  When she wakes up he has brought her something to eat, drink, and wear.  She is overwhelmed by what to her appears to be an extravagant amount of generosity.  It’s easy to tell that she has never seen a moment of kindness in her life.

As she recovers the two of them start to bond.  They are the “broken blossoms” of the title – two damaged people who are far better than the circumstances in which they live.  For Lucy the bond is just kind thoughts towards her benefactor.  For Huan it’s obviously more.  He makes as if to kiss her a couple of times, but each time remembers that he’s a good man who would not take advantage of the situation and so he stops himself.  There’s no “lusting after the white woman” over the top racism like in The Birth of a Nation.  Instead, this is an emotional relationship where each person finds something in the other that makes them more whole.

Naturally Lucy’s father finds out that she is staying with Huan.  He heads over there and forcibly drags her home while Huan is away.  What follows is the most talked about scene in the film – Lucy scared out of her mind, barricaded in a closet trying to stay away from her father’s wrath.  Gish reportedly even scared with her performance in this scene.

Like the movies made at this time the characters are all very black and white.  Lucy is an abused innocent.  Huan is a saintly man who has fallen on hard times.  Burrows is pure evil.  ’s regular leading lady Lillian Gish couldn’t really pass for a teenager anymore when she made this film at 26, but you could say the same about most any film about teenagers made even today.  Barthelmess plays Huan with respect – a far different approach than most any other film made then or for decades to come.

If you’ve only seen ’s big budget, epic films then you might want to seek this one out to see what he could do when he went small and intimate.  If you hate silent movies then Broken Blossoms will probably not change your mind.  For everyone else, if it sounds interesting then I recommend you give this film a try.