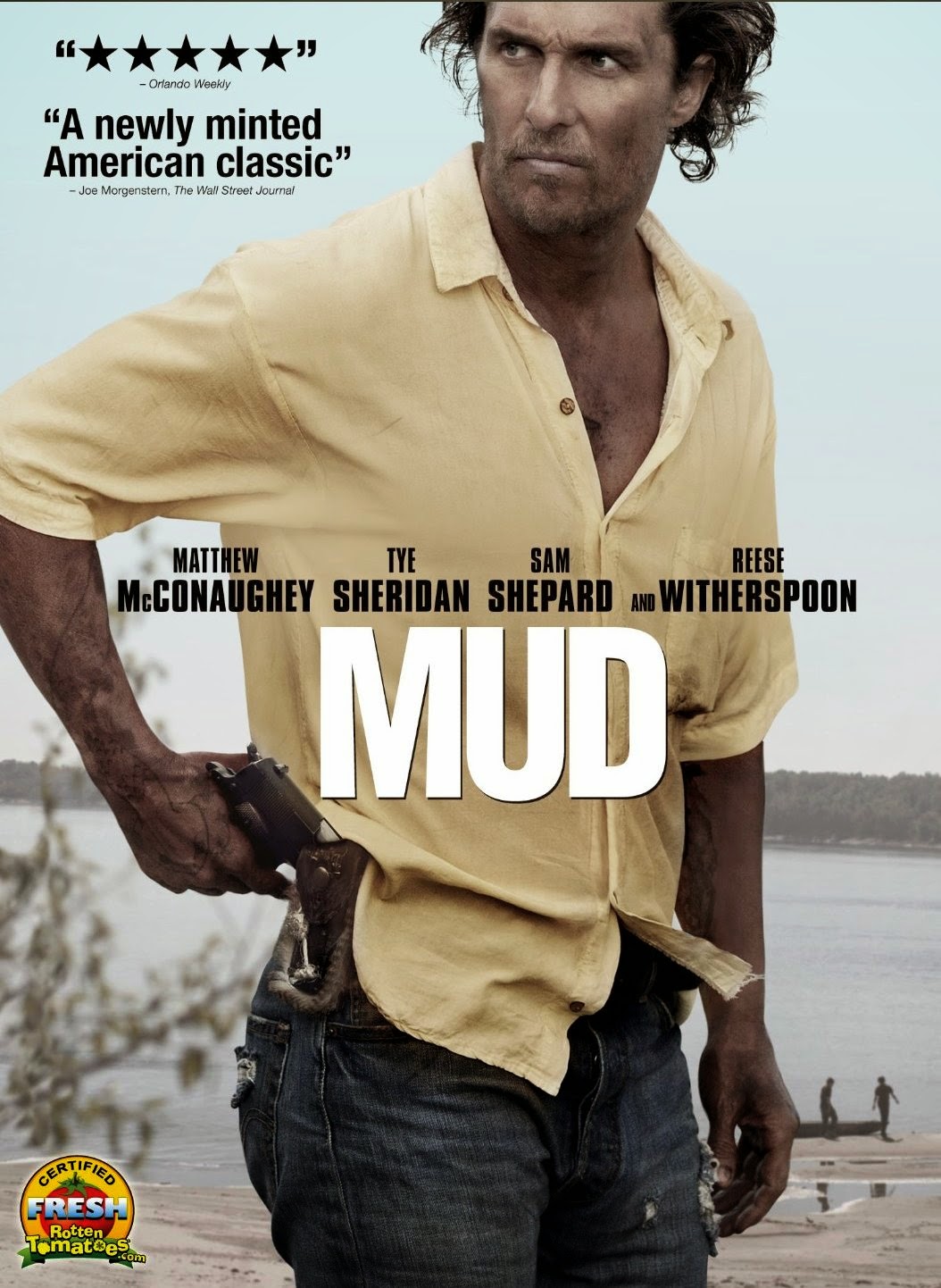 Matthew McConaughey had a celebrated year in 2013 with a memorable cameo in The Wolf of Wall Street and an Oscar-winning turn in Dallas Buyers Club.  For my money, though, his best film of 2013 was Mud.  (Wolf was better, but it wasn’t his movie.)  In fact, Mud is one of my Top 10 films of 2013.  It’s from writer/director Jeff Nichols, who had previously done 2011’s Take Shelter, which garnered a number of good reviews.  I consider Mud to be a good step up from Take Shelter and I look forward to what Nichols may do in the future.


Just as an aside, writing about Nichols is a little strange because one of my oldest friends in the world is named Jeff Nichols.  It’s not the same guy, though.

The title of film – Mud – is actually the name of the character played by McConaughey.  He’s not really the main character, but rather an important person in a small ensemble.  Even though he and Reese Witherspoon, who plays a woman named Juniper, are in this film it’s actually seen from the eyes of two adolescent boys.  In some ways you could consider this a coming of age film.

The main boy is Ellis, played by Tye Sheridan (The Tree of Life).  And in a film with characters named Mud and Juniper the best name, and maybe one of the best character names ever, is Ellis’ best friend Neckbone (newcomer Jacob Lofland).  These two boys live in on the .

Ellis’ parents (Ray McKinnon and Sarah Paulson) are having troubles and may get divorced.  If they do the houseboat they live on will have to be sold because neither can afford to buy the other’s half.  Neckbone, on the other hand, lives with his single dad (Michael Shannon).  It’s summer and Ellis and Neckbone spend a lot of time running around on a small motorboat and on Ellis’ dirt bike.

The two decide to explore an island in the river.  They discover a boat that was left high up in a tree from a flood.  The climb up to it, figuring it will make a great place to stay or maybe they can even somehow get it down out of the tree and repair it.  When they get inside, though, they discover that someone is living in it.  A little freaked out they head back to their boat…only to find a man’s footsteps in the sand around it.  They follow them and the footsteps simply stop in the middle of the beach.  They turn around and behind them is a man.  He says his name is Mud and wants to know what they were doing on his boat (the one in the tree).

They are quite scared, but they say it’s their boat, not his.  They then run off.  Ellis can’t resist going back, though, and he encounters Mud again.  This time they start talking.  Mud has many stories that are just wild and mysterious enough to fire the imaginations of the boys.  Because of the troubles of his parents Ellis is especially drawn to Mud’s story about Juniper – a girl that he’s loved since he was the boys’ age.  Mud says he and Juniper are destined to be together, but things have been rough.  He says that Juniper got caught up with a bad man who beat her and pushed her down some stairs.  When Mud found out about this he badly beat the man, but then had to abandon Juniper to avoid the police.  He says that he and Juniper are going to be meeting up in town and he asks the boys to keep an eye out for her.

Ellis’ head is filled with romantic visions of adventure and destined love.  He asks the old man (Sam Shepard) across the river about Mud and Juniper since Mud had let slip that he was originally from around this area.  The old man, whose name is Tom, has nothing good to say about Mud.  He says he’s always making up stories and that Juniper is nothing but trouble for Mud, but Mud never learns.  It turns out that Mud is Tom’s estranged son.  As far as Tom, an old military man, is concerned, Mud is good for nothing and Juniper is even worse.

Undaunted, Ellis and Neckbone continue to be caught up in Mud’s and Juniper’s story, even to the point of starting to get in trouble themselves.  Mud promises to give them his gun if they will help him get the boat down out of the tree and repaired.  He and Juniper will then leave on it.  Mud needs their help to gather parts, though, since he can’t be seen in town.  The reason he can’t be seen is one that Ellis and Neckbone eventually learn, but not before they are deep into it with Mud – maybe too deep to avoid the trouble coming Mud’s way.

Both the young actors do good jobs.  I believe both were from the area so they had the accents and were familiar with life there.  McConaughey plays Mud with a little larger than life persona – a character shrewd enough to know what would get the boys to do what he wanted, but at the same time one lost in his relationship with Juniper.  Witherspoon gets to play a far from bubbly person, and one that you’re not sure if you should like or not.  In other words, these are much more real life people in real life messy situations than you get in most movies that have a “true love” component to them.  The film also shows these boys realizing that the world is a lot more complicated than the black and white good guys/bad guys model that they’ve always thought it was.

My only negative with the film, and it was a small one, was that I felt that a big event towards the end of the movie had been completely telegraphed because the film kept showing something over and over that was otherwise irrelevant.  Since I’ve been told I’m “not normal” when it comes to realizing ahead of time what is going to happen in films I won’t describe the specifics of this so as not to spoil it for anyone else.  For those who have seen the film, it’s the reason a trip to a hospital was needed.

Mud is a very good film.  Like the it takes place on, it is measured and gets to where it’s going in its own time.  If you want wall to wall excitement this may not be the film for you.  While it does have its moments of danger, that’s what the film builds to, rather than it being what the film is all about.  Instead it’s a coming of age, mystery, real life is messy kind of movie.  I highly recommend it.