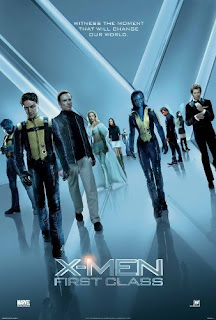 This movie is a semi-reboot of the X-Men franchise.  It takes place in 1962 when Charles Xavier (James McAvoy) and Magneto (Michael Fassbender) became friends and gathered their first group of mutants to train.  1962’s Cuban missile crisis plays a big part in the climax of the movie.  I’ll explain what I mean by “semi-reboot” a little lower in the post, but the key thing you should know is that you do not have to have seen the prior three X-Men movies, or the Wolverine movie, to understand who people are or what is going on in this movie.

In addition to McAvoy and Fassbender, the movie stars Kevin Bacon as Sebastian Shaw, January Jones as Emma Frost, and Rose Byrne as Moira MacTaggert.  People who have read the comics will be familiar with those names – and yes, The Hellfire Club is involved.  They did make a change to Shaw’s power.  Instead of being able to absorb kinetic energy, in the movie he can absorb all kinds of energy.  He can also release some of that energy.  For those who haven’t read the comics, these characters are well introduced in this movie.

In addition to Charles Xavier and Magneto, two other characters appear in younger versions in this movie.  They are Mystique, played by Jennifer Lawrence (fresh off her Oscar nomination from Winter’s Bone), and Beast, played by Nicholas Hoult (who played the boy in 2002’s About a Boy.)

There are two familiar character cameos for people who have seen the earlier movies.  One of them is very funny and the audience laughed quite a bit at it.

Additional comic book characters that appear are Banshee, Havok, and Azazel.  New characters (at least to me) were Angel (a woman who can fly - not the Angel from X-Men 3), Darwin (a man who can adapt to survive), and Riptide (a man who can create mini tornados.)

I’ll now explain what I meant by “semi-reboot”.  There seems to be a lot of confusion for some people who have seen the earlier X-Men and Wolverine movies.  This is caused by the fact that some characters, relationships, and timelines in this movie are not consistent with what was shown in the four prior movies.

I took the movie as simply a complete reboot of the X-Men franchise, but when I went online there were a number of people claiming that it isn’t, including some of the people involved in the film.  Perhaps they feel that the term “reboot” has been getting used way too much in regards to movies nowadays.

If you have seen the prior movies it’s best if you just don’t assume how things will turn out based on what you’ve already seen in those other movies.  Oh, and if you’re expecting to see Charles Xavier as a bald man in a wheelchair then you’ll be disappointed.  He’s very much a man in his twenties who is trying to enjoy the swinging singles scene in when we first meet him.

Since the movie is set in 1962 it has characters that reflect the chauvinistic attitudes that some men had towards women then.  This also seems to have thrown the younger movie audiences.  Because of not understanding the characters are acting specific to a time period (and also not being familiar with Emma Frost from the Hellfire Club days in the comics) they have come to assume that the filmmakers themselves are misogynistic.  This is not the case.  Anyway, all of the female characters give as good as they get in this movie by the time all is said and done.

Inconsistency with the earlier films, and the filmmakers’ poor treatment of women, are the two negative things that I have heard the most about this movie.  As I showed above, neither of them is an accurate assessment of the movie.

Another nod to the 1960s comes from this movie having a little bit of the feel of the Bond movies from that era, especially when a yacht has a small submarine separate from it so the bad guy can escape.

This movie is a very entertaining summer action movie.  It can be enjoyed by both the fans of the earlier X-Men movies, and by people coming to the franchise for the first time.  It has a great sequence towards the end with these characters getting involved in trying to prevent the Cuban missile crisis.  Finally, McAvoy and Fassbender do great jobs with how they develop the relationship of their characters and give hints of the men they are going to become.

Unless you hate superhero action films, I highly recommend this movie.