Movie – Pirates of the Caribbean: On Stranger Tides (2011) 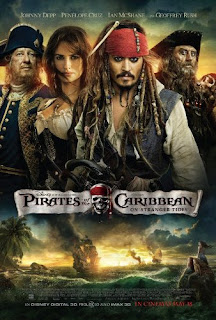 This is the fourth movie in the Pirates of the (PotC) franchise.  This time around only Johnny Depp, Geoffrey Rush, and Kevin McNally (Master Gibbs) return.  All the other characters, including Keira Knightley’s and Orlando Bloom’s do not appear.  Director Gore Verbinski also did not return for this movie.
Is it still a PotC movie with just these few?  Yes.  It has the same feel as the others, probably because the writers carried over from the other movies.  Overall it is a step down from the first two; about on par with the third one.
New characters added for this movie are Ian McShane as Blackbeard and Penelope Cruz as a conwoman who may or may not be his daughter.  Also new, in smaller roles, are a clergyman played by Sam Claflin and a mermaid played by Astrid Berges-Frisbey.  Watch for cameos by Keith Richards and Judi Dench.  Also, like the other PotC movies there is a small scene after the credits.
Cruz’s character has a past with Captain Jack Sparrow.  They have both an attraction for each other and a dislike for each other.  The two actors have good chemistry.  Ian McShane is reasonably menacing as Blackbeard, but I didn’t get a whole lot out of his part in the movie.
Strangely, Depp’s character is not so mercenary this time around.  Perhaps Depp asked them to soften the character some, or perhaps now that his character is the true main one, they felt they needed to make him a little nicer.
The premise this time is that different groups of people are all searching for the Fountain of Youth.  Jack falls in with Blackbeard’s crew, who is searching for it.  Barbossa (Geoffrey Rush) is now in the service of the King of England and has been ordered to find it.  Between the last movie and this one he lost the Black Pearl, and his leg, to Blackbeard.  Finally, there is a group of Spanish sailors that are also searching for it.
You can pretty much figure that it will be found, so it’s not a spoiler to mention it.  (There wouldn’t be much of a movie if they didn’t find it.)  I mention this sequence because it points to the drop in some of the quality.  People go through all kinds of challenges, including mystical ones, to get to the Fountain, and then the movie has a whole ton of people just walk into the same place from offstage.  If everyone knew where it was, and you could just get to it that easily, then why bother with most of the rigmarole?
That was my biggest complaint with the movie, but it’s not enough to say the movie is not worth watching.  As I mentioned, it is about on par with the third one.  If you like the other PotC movies, and especially if you liked them because of the Captain Jack Sparrow character, then give this one a try.
Chip’s Rating: 3 out of 5 stars