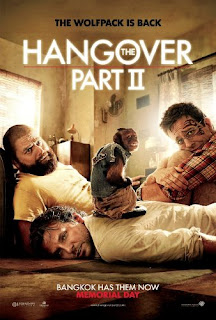 This movie is the sequel to the huge 2009 hit The Hangover.  It returns all of the same cast (Bradley Cooper, Zach Galifianakis, Ed Helms, Justin Bartha, Ken Jeong, etc.), except for Heather Graham.  Jamie Chung replaces her in this movie as a new love interest for Ed Helms’ character.
Like many sequels, and most comedy sequels, this movie is not as good as the original.  They repeat a lot of the same jokes, and while some are still funny, they are not as side-splittingly funny as when we saw them in the first movie.  Still, there are enough laughs to recommend the movie.
This time around it is Ed Helm’s character who is getting married.  His fiancée is from , so the wedding is being held in .  The movie follows the same formula as the first one – getting wasted, waking up, and trying to find someone while piecing together what happened.
Galifianakis’ character this time around is a lot less likable.  Other than that you pretty much get all the same characters as in the first movie.
The way they end up getting wasted this time around isn’t remotely believable, but you just have to go with it.
This movie is rated R and earns it for its language.  For anyone hoping for nudity there is some and it’s from both genders.  Yes, you see boobs, but you also see penises, too – sometimes at the same time.  (Think about one of the things is famous for and you’ll know what I mean.)  If you’re the kind of juvenile guy who turns inside out if he gets a glimpse of a penis then you’ll want to cover your eyes at certain points.
I had expected two things to appear at some point in the movie – the aforementioned thing is famous for, and to have the 1980’s song One Night in get played at some point.  The movie was almost over and I still hadn’t seen the latter.  I was kind of disappointed, especially since they had used other 80s songs in the soundtrack.  It was at this point that the movie had a really funny cameo and the song got used.  There was another funny song from Ed Helm’s character during the movie, too.
You may just want to get to spend another movie with the characters from the first one.  You may want to see how the moviemakers get them into and out of similar situations to the first one.  You may just want some decent laughs.  If so, then give this movie a try.
Chip’s Rating: 3 out of 5 stars