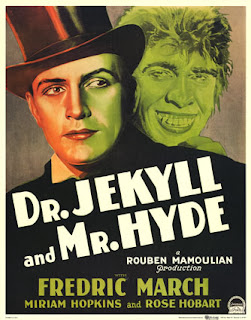 When most people think of “monster movies” they have images of fun but dumb movies, standard characters, perhaps cheesy special effects, bad accents, etc.  Academy Award level acting probably is not something most people expect when they sit down to watch one.  (Yes, the 2003 film Monster earned Charlize Theron a Best Actress Oscar, but the title refers to her character’s actions, not a physical monster.)  Well, in the perhaps unique case of the 1931 film Dr. Jekyll and Mr. Hyde, based on the Robert Louis Stevenson 1886 novel The Strange Case of Dr. Jekyll and Mr. Hyde, lead actor Fredric March won the Best Actor Oscar for his performance in both title roles.  Off the top of my head I can’t think of any other Frankenstein, Dracula, Wolfman, Invisible Man, Jekyll/Hyde, Zombie, Godzilla, etc. film that had someone win an Oscar for their acting in it.


The Dr. Jekyll and Mr. Hyde story is one that has become such a part of pop culture that you can simply say “Jekyll/Hyde” when describing someone or something and the other person knows what you mean.  There have been several dozen versions of this story across all media.  The book was immediately popular and generated a stage play only a year after it was published.  There were movie versions as early as 1910.  There have been films done across a host of countries including , , , and .  And the physical changes have gone from the bestial, ugly Hyde in the original story and earlier films to include ones where Hyde is actually the attractive one (i.e. 1960’s The Two Faces of Dr. Jekyll), comedic versions with the same concept (i.e. 1963’s The Nutty Professor, as well as the Eddie Murphy remake), blaxploitation ones (i.e. 1976’s Dr. Black, Mr. Hyde), and even ones where Jekyll turns into a woman (i.e. 1971’s Dr. Jekyll and Sister Hyde, 1995’s Dr. Jekyll and Ms. Hyde).  And in the superhero genre is there a more obvious Jekyll/Hyde character than Dr. Banner and the Incredible Hulk?

One thing that has remained mostly constant across the adaptations I have seen or have read about is that Hyde is more sexually voracious and virile than the gentlemanly and/or awkward Jekyll.  This was not a problem for director Rouben Mamoulian (Love Me Tonight, Queen Christina) because this was still the pre-Code era of .  There are scenes that strongly imply sex is going on in the 1931 film, and even one where Miriam Hopkins appears all but nude.  Several minutes had to be cut from the 1931 film when it was re-released in the mid 1930s.  It was not until recent DVD releases that the restored, 97 minute uncensored version was able to be seen again.

For the few people who don’t know the Jekyll and Hyde story, you should know that this film, like Frankenstein, does not really adapt the book as much as it just takes the concept and goes with it from there.  In the film we see right as it happens that Dr. Jekyll has become Mr. Hyde.  In the novel this is a reveal after both characters have been running around for quite a while.

The 1931 film opens in Victorian England with Dr. Henry Jekyll (Fredric March) giving a presentation to an audience on how man has two sides – a good one and an evil one.  If we could free ourselves from the evil one, he says, we would be so much better.  Jekyll is engaged to Muriel Carew (Rose Hobart).  He speaks with her father General Danvers Carew (Halliwell Hobbes) about moving up the date of the marriage.  The General is a real prick who delights in humiliating the ineffectual Dr. Jekyll and he not only refuses, he takes his daughter with him out of the country for months so that the two can’t even see each other.

Left on his own, Jekyll starts experimenting in his laboratory to see if he can eliminate that bad part of him.  He tests his formula on himself, but he transforms into a bestial person (March again) who embodies all the worst vices of man.  He is also very ugly.  (Ugly = evil, don’t you know.)  This new person dubs himself Mr. Edward Hyde.  He goes out into and paints the town red.  He encounters bar singer Ivy Pearson (Miriam Hopkins) and wants her.  He tells her he will pay her way, put her up in a fabulous apartment, and in return he will expect “her company”.  She agrees, but soon comes to regret it.  Hyde moves in and dominates her, keeping her in constant fear.  It is not until he hears that Muriel and her father are returning that he leaves, but threatens Ivy with harm if she tries to leave herself.

Hyde uses the formula to transform himself back in Jekyll.  Unfortunately, Ivy seeks out the noted Dr. Jekyll for help in her situation (since Jekyll had come to her aid once before – that’s how Hyde knew her.)  Jekyll is horrified at what his alter ego has done to Ivy and promises her she never needs to worry about Hyde again.  There wouldn’t be much of a movie is this was the end of it, of course.  No, while Jekyll is on his way to see his fiancée he transforms into Hyde without even taking the formula.  Hyde, with Jekyll’s knowledge of what Ivy has done, returns to her and in a fit of rage, kills her.

Hyde returns to Jekyll’s home, but cannot get in to get to the formula he needs to change back.  He has to reveal himself to a friend, who is astonished.  The problem of spontaneously changing into Hyde isn’t going to go away, though.  There is something in Jekyll that seems to want to keep being Hyde.  It will eventually spell doom for several people.

Like The Invisible Man (1933), which pioneered some much talked about special effects techniques for the onscreen invisibility, Dr. Jekyll and Mr. Hyde also startled with its transformation scenes.  You actually see Dr. Jekyll’s face turn into that of Mr. Hyde.  Yes, it’s crude by today’s cgi standards, but back then it was nothing short of remarkable.  In fact, the filmmakers kept how they did it a secret for decades.  It was finally revealed that the makeup had been applied to March’s face in different colors.  They would then use different colored filters on the camera.  When they would switch from one to another it would now make visible a different set of makeup.  They were able to do this because the black and white cinematography did not reveal the changing colors.

The appearance of Hyde in this film is curious.  He seems to be a cross between a caveman and an apeman.  He is certainly simian in appearance and in movements in a big action scene towards the end.  This is a visual manifestation of the Victorian ideal than modern man was more refined and evolved than primitive man.  Of course, modern people have just as many animal desires as they ever had; it’s just that society has changed to the point where people are taught to suppress them as much as possible.  In that sense Hyde is the ultimate embodiment of people cutting loose, giving in to their base desires.  Hyde kills at least one person in the film that a lot of audience members would probably have liked to have offed themselves.

And therein lies the appeal of these kinds of stories for people.  In one sense the unrestricted Hyde is getting to live out some of the darker fantasies of the people watching the film.  I think that’s why over the years the story has become one where Hyde is actually the more popular of the two sides.

As I mentioned, there are any number of versions of this story.  In fact, when a 1941 version was made that studio tried to get rid of every copy of the 1931 version they could get their hands on.  For a long time no one saw March’s Oscar winning performance.  You can, though.  You should probably see some version of this story for the impact it has had on popular culture and if you’re going to pick one then why not the one whose lead won an Oscar?  If you agree then I recommend you give this film a try.