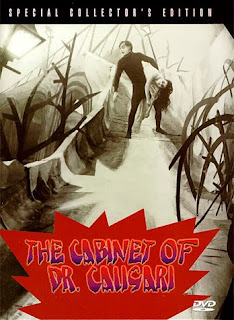 Years ago I was in a store and came across The Cabinet of Dr. Caligari on a bargain DVD.  It cost me next to nothing so I bought it even though I had not seen the movie and knew nothing about it other than it was old and I recognized the title.  Predictably, the DVD transfer wasn’t in very good shape, but I was still able to watch it. And what I saw was quite a surprise to me.  I was not expecting much and instead I got what may very well be the oldest film there is with a surprise twist/reveal in it.  I did not see it coming at all.  Don’t worry. I will not be spoiling it in this review.


The film opens with two men sitting on a bench in a garden.  The older man (Hans Lanser-Rudolf) notices a young woman (Lil Dagover) walk by in a daze.  The younger man on the bench, Francis (Friedrich Feher), says that the woman is named Jane, she is his beloved, and her condition is the result of a tragic story.  Francis says he will tell the other man what happened.  (Hello Forrest Gump.)

We flash back and the look of the movie changes.  All of the sets are built at odd angles and in strange shapes.  The shadows do not always match the lighting.  These sets are an example of the art movement that was popular at the time.  I wrote them off as this being the early days of filmmaking and perhaps they wanted their movie to look quite different.  As it turns out, these sets are very much designed the way they are for a specific purpose, not just for the look of them.  But to say why would be a spoiler.

In the flashback a carnival comes to town and Francis and Jane attend with Alan (Hans Heinrich von Twardowski) – Jane’s boyfriend.  While walking around they have a carnival barker entice them to come in and see his show.  He introduces himself as Dr. Caligari (Werner Krauss) and he shows them a man in a vertical sarcophagus.  He claims this man named Cesare (Conrad Veidt, who many years later would play Major Strasser in ) is a somnambulist who has been asleep for years.  Dr. Caligari further claims that he can awaken Cesare and command him to answer any question put to him.  Alan asks when he will die.  Cesare replies that he will be dead before morning.

Needless to say this puts a damper on the enjoyment of Alan, Jane, and Francis so they leave.  That night we see shadows of two men fighting in Alan’s room and the next morning he is found murdered.  Francis reports to the police the prediction they got from the strange Dr. Caligari and Cesare, but the doctor satisfies police that he could not be involved.  Francis and Jane don’t believe that, though, so they determine they are going to get to the bottom of this man’s story.  They think that Dr. Caligari is somehow controlling Cesare and having him kill for him.  What they find out is not nearly as shocking as what the viewer finds out once all is said and done.

The tone of this film is one of creepiness and mystery.  There’s a feeling that Dr. Caligari might be messing with dark forces.  And we know something happened to poor Jane to leave her in a dazed state.  Some people have called this the first horror film, but I don’t know that I would go that far.  I would describe the film as more suspenseful than scary.  And when you finally find out what has been happening it is a really great moment.  I loved the ending of this film.

The Cabinet of Dr. Caligari was remade 85 years later under the same title.  I have not seen the 2005 film, so I do not know how it compares.  I only mention it because I believe that it set a record for the longest time period between a film and a remake of it.

If you have not seen the original version then you owe it to yourself to seek it out.  Unless you absolutely can’t stand silent films then I highly recommend you see it.