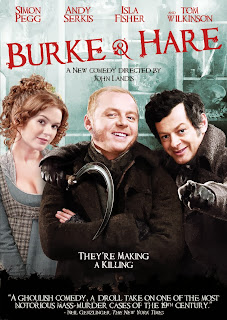 Burke and Hare is a dark comedy from director John Landis (Animal House, An American Werewolf in ).  It was his first feature film in more than ten years.  The film uses the real life case of William Burke and William Hare and how they “procured” cadavers for Dr. Robert Knox, a professor at in in 1828.  There had been a 1970s movie on the subject, but I had never seen it.  I had also never heard of this case, so the film was entirely new to me.  While it did play some with motivations, my understanding is the principal facts are generally accurate in this.  I like twisted humor, so this movie was right up my alley.  The subject and tone of Burke and Hare also fits in well with its other Ealing Studios counterparts such as Kind Hearts and Coronets (1949) and The Ladykillers (1955).


The film opens with a hangman (Bill Bailey) explaining to us that there were fewer hangings being carried out.  This was a “problem” because the medical schools relied on these criminals’ bodies as fresh cadavers for their classes on human anatomy and surgery.  Dr. Knox (Tom Wilkinson) had been the preferred surgeon to receive the bodies, but suddenly he is being passed over and the bodies are now going to Dr. Monro (Tim Curry).

Meanwhile, Burke (Simon Pegg) and Hare (Andy Serkis) are seen trying to run a con by selling cheese mold to people.  When this fails they return to Hare’s wife Lucky (Jessica Hynes), who owns a lodging house.  She tells them that one of the tenants has just died.  Burke and Hare figure they might as well make some money off this and take the body to Dr. Knox.  Seeing an opportunity, Dr. Knox tells them that if they can continue to supply him with cadavers he will pay them handsomely.

Burke has become enamored of a young woman named Ginny Hawkins (Isla Fisher) who is a prostitute, but wants to be an actress on the stage.  He sees this money-making opportunity as a way to buy her a career.  Hare just wants to open a legitimate business for once.  Since it’s a funeral parlor there’s some question as to just how legitimate that business might be considering their offer from Dr. Knox.

When Burke and Hare see Hare’s wife again she tells them that another lodger is ill and dying.  They go to see the man (cameo by Christopher Lee) and end up smothering him as a sort-of-but-not-really mercy killing.  When Dr. Knox sees them turn up so quickly with another body he suspects there might be foul play, but he turns a blind eye to it.  While he may or may not be an “evil doctor” he is at the very least severely ethically challenged.

Neither Burke nor Hare is really interested in grave robbing to get bodies, and since smothering the old man seemed a lot easier, they are soon murdering their way through the neighborhoods of .  Lucky and Ginny know, or at least suspect, what is happening, but they are happy with all the money coming in.  There’s a funny scene where it shows a blackmailer confronting Hare about the deaths and then turning up on the examining table of Dr. Knox.

Needless to say, these deaths do not go unnoticed, nor does the fact that Dr. Knox somehow seems to keep getting cadavers for his anatomy classes.  Lord Harrington (Hugh Bonneville) tasks some men with tracking down the killers and bringing them to justice.

Simon Pegg and Andy Serkis are great together onscreen.  They play off each other and they have a number of funny exchanges.  Instead of this being a “buddy cop” movie you could call it a “buddy criminal” one.  Serkis gets a ton of praise for his motion capture work (i.e. Gollum in The Lord of the Rings movies), but he’s a gifted comedian in his own right.  And I don’t think it’s possible for Isla Fisher to not be sweet and cute on screen, so having her play a prostitute with a dream of being an actress brings its own amusements.

There are also some jokes where real life personages Charles Darwin, William Wordsworth, Samuel Coleridge, and Dr. Lister appear as characters.  The latter pioneered the sterilization of medical instruments during surgeries.  The joke is that he is accused of having bad breath.  (Listerine would later be named after him.)  And with all the doctors in this film Landis couldn’t resist re-creating the scene from his film Spies Like Us (1985) where they all acknowledge each other by their “doctor” titles.

If all of this sounds too macabre or too insensitive to you then you probably will want to skip this film.  On the other hand, if you like dark comedy and/or this sounds interesting, then I recommend you check it out.