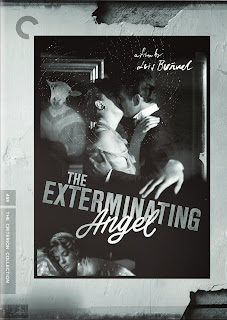 Writer/director Luis Bunuel’s film The Exterminating Angel (not to be confused with the 2006 film The Exterminating Angels which actually has angels in it) has a title that really doesn’t have much to do with the movie.  That has not stopped people from generating wild theories on what it really means.  The simple answer is that Bunuel had a colleague who was going to write a play with that name and Bunuel liked the title because he felt people would see “The Exterminating Angel” on a sign and buy a ticket.  It was all about commercial success, not artistic pretensions.  That’s not to say that this film doesn’t contain any number of patented Bunuel surreal moments, like a bear and some sheep being kept inside the house in which the film takes place.  I liked this film, but it will not be for everybody.  I will explain.


First, I should say up front that I am not that big a fan of Bunuel.  I’ve seen ten of his films and my reactions have been quite varied.  Some I have liked, some I felt were okay, some I disliked, and a couple I hated.  I feel that The Exterminating Angel is among the best of the movies I have seen from him.

So what happens in this film?  Well, as he so often does Bunuel satirizes the rich, in this case eventually bringing them down to the level of animals.  An elegant dinner party is being held with around two dozen guests.  As they start to arrive, some of the wait staff inexplicably start to leave.  First it is the maids, then the kitchen staff, then finally the waiters.  Eventually only the head of the house’s staff is left.  None of these people are plotting anything; they simply have an uncontrollable desire to be somewhere else.

While the house is being emptied of staff, the rich guests are all oblivious.  They go on about things that sound quite important to them, but really are not.  Eventually everyone ends up in a sitting room to listen to one of them play some songs on a piano.  Each time one of the guests thinks about going home and they start to walk towards the wide exit of the room, they always get distracted by a new thought or another guest.  Eventually it is early morning and still no one has left.  Everyone decides to stay and they do not even go to the bedrooms.  They all lie down on the floor to sleep.

In the morning, the one remaining staffer brings in a cart of food and beverages.  When he starts to leave the room for more things for the guests he starts getting side tracked as well.  As the day wears on it finally becomes apparent to the guests that something is preventing all of them from leaving this room.  It’s not a physical barrier; there are no mime scenes of people pressing their hands against something invisible.  It’s just that no matter how much they want to leave they cannot force themselves to do so.

The days wear on and we see these “cultured” people start to disintegrate.  They start treating each other badly, sneaking into a closet to cheat on their spouses, and fighting over the remaining supplies.  Eventually they even have to tear into a wall to break a water pipe to get drinking water.  Weeks go by.  They eventually descend into almost animalistic living.  It’s this descent that makes for some entertaining dark satire.

The disappearance of these people has not gone unnoticed by their families.  A crowd has gathered outside the gates of the house.  Despite the fact that it is wide open, and that they are concerned about their loved ones, no one can make themselves enter the house, either.  Again, there is no physical barrier; just an inability to take that action.

Those viewers hoping for an explanation of what is happening will be disappointed.  Without spoiling whether the people ever get out or not, I will say that Bunuel never addresses what is keeping them there.  Oh sure, people have speculated on what it is.  “The hand of God” is usually the answer people go to first, since the title has “angel” in it, and since supernatural events are often the work of the gods in fiction.

This film, or at least the main plot of people not being able to leave a room, is probably one of the best known of Bunuel’s.  It has been referenced many times in pop culture, and in things as widely separated as Woody Allen’s 2011 film Midnight in where the main character suggests to Bunuel that he write just such a story – Bunuel’s reaction is a puzzled “But why can’t they leave?” – and the TV show Buffy the Vampire Slayer where all the characters find they cannot make themselves leave a house after a birthday party.  (One of the things that made that show so great was that it didn’t just reference classic monster movies for its episodes, but things from all over the creative spectrum, including this Bunuel film.)  For those who would like to see the Buffy version, it was episode 14 of Season 6, which is titled Older and Far Away.  In another nod, that title has as little to do with the episode as The Exterminating Angel has to do with Bunuel’s film.

So, if you like seeing the rich “get what’s coming to them” then you might just enjoy this film.  If you dislike movies where you do not get any concrete answers on why something is happening, then you probably will not like this film.  For everyone else, if it sounds interesting then I recommend you give it a try.