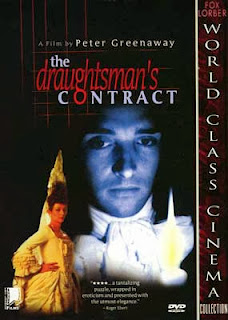 If you have never heard of this film before today, I can completely understand.  I never heard of it myself before it was added to the most recent edition of the 1,001 Movies You Must See Before You Die.  It is from writer/director Peter Greenaway (The Pillow Book, Drowning by Numbers) and might be the most normal of the four films of his that I have seen.  Of course, “normal” is a relative term.  For instance, this film has a naked man who is some sort of moving statue that most people cannot see.  He might represent the Green Man from Anglo mythology.  And if you have a penis aversion (would that be “phallophobia”?) then you should know that you see everything.  This is just a small touch of Greenaway’s typical strangeness, though.  The main part of the film involves a slow realization that what we think is going on may be completely wrong.  And it all involves a murder.


In 1694 in a noted draughtsman (architectural artist) named Mr. Neville (Anthony Higgins) refuses the entreaties of Mrs. Herbert (Janet Suzman) to come make a series of twelve drawings of her husband’s magnificent estate.  He finally agrees to come if she will ensure that all of his demands for drawing conditions are met (i.e. no disruptions or distractions in the view) AND if she will have sex with him each day while he is working on them.  Surprisingly she agrees, but makes it known to him that she is not happy about it.  Even stranger, her husband’s lawyer Mr. Noyes (Neil Cunningham) draws up the contract that includes the sexual requirement.  Mr. Herbert is going to be away for an extended period, so Mr. Neville ought to be able to both complete the drawings and bed Mrs. Herbert without trouble.  You know what they say about the best laid plans.

When Neville gets there he is very demanding.  He has a precise schedule where he will draw from multiple views during the day for one hour apiece while the sun is in the correct position.  During those hours no servants can be in sight.  And those views must not change from day to day as he works on parts of each drawing.  By the way, his schedule even includes the time each day when Mrs. Herbert will come and have sex with him.

It’s not long before he finds that Mrs. Herbert’s adult daughter Mrs. Talmann (Anne-Louise Lambert) seems to have a mischievous need to place objects into each view to slightly change them from day to day.  And her husband Mr. Talmann (Hugh Fraser) is a self-important prick who doesn’t see why this draughtsman ought to be able to order people around.  One day he deliberately stands right in view of one of Mr. Neville’s drawings.  Not to be outdone, Neville simply includes his outline in the picture, then informs Talmann that he must come back every day at the same time, and wearing the exact same clothes, otherwise the drawing that Mrs. Herbert is paying so much for will be ruined.

As the days go on, the two men quarrel more and more.  Mrs. Talmann finds Mr. Neville to be fascinating and not at all like her stuck up husband.  It’s not long before Neville and Mrs. Tallman are also having sex.  All of this is complicated enough, but eventually Mr. Herbert is overdue from his trip.  Then his horse shows up riderless.  Finally, Mr. Herbert’s corpse is found in a body of water on the estate.

Now we realize that the film is a murder mystery and it calls into question everything we have seen to that point.  Has Mr. Herbert been dead the entire time or was he just killed as he returned?  If someone killed him early on, why would they bring an outsider like Mr. Neville to the estate?  Is it perhaps so that Mr. Neville could possibly provide an alibi for the murderer, be it the wife, the daughter, or the son-in-law?  The lawyer, Mr. Noyes, is not a stupid man.  He knows that he is both expendable if someone wants to pin the murder on him, and that he has leverage.  He blackmails Mrs. Herbert into giving him the valuable drawings or he will expose the terms of the draughtsman’s contract and everyone will know she was an adulteress, and therefore a prime suspect in her husband’s murder.  He will sell the drawings to effect his escape.  And why did Mrs. Herbert agree to such a contract in the first place?

Speaking of the drawings, might the reason so many people are interested in them is not their value, but because they might contain clues (i.e. a ladder against the side of the house, an article of clothing on a bush, etc.) to the actual demise of Mr. Herbert?  The answer to what is really going on might be one that you do not guess.

I just want to take a moment and say that because of the setting and time period everything from the house, to the estate’s grounds, to the costumes worn by everyone, are completely over the top.  They are all an excess of showmanship and make for some interesting visuals.

While the setting might make you think this is a book adaptation, it is an original screenplay by Greenaway.  He is an artist and all of the drawings in the film, as well as any close-ups of hands making the drawings, are from Greenaway himself.  He noticed that when he was attempting to draw a place where he was staying one time that the movement of the sun prevented him from being able to complete any sketches in time.  He had to come back each day at the same times in order to properly work on them.  That’s where he came up with the idea for the title character.

The plot of this film appears to be straightforward…until you realize that it isn’t.  Because of this you should pay attention in the early going, even if it seems like not much is happening.   This film doesn’t have a police inspector or what not that arrives at the end to sum up everything and completely explain away all mysteries.  There are some things that we probably know the answer to, but that we are not giving 100% assurance of.  If that would bother you a lot, then you may want to avoid this film.  For everyone else, if it sounds interesting then I recommend you give it a try.