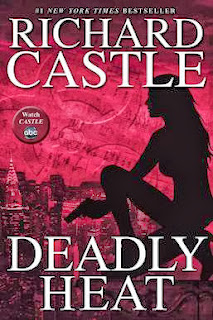 Deadly Heat is the fifth book by “Richard Castle”, the fictional writer on the TV show Castle.  The actual author of these books is speculated to be one of the real authors who have appeared on the show (i.e. Michael Connelly, James Patterson) or one of the show’s creators (i.e. Andrew Marlowe).  Like the first four books, this one has events or plot points similar to things that have happened on the Castle TV show in the prior season.  This book addresses the revelations and open plotlines from the fourth book.


While this book picks up a few months after the last one left off, it can be read on its own.  The author re-introduces the characters at the beginning, just as most serial detective novels do.  When this book opens Nikki Heat is still dealing with the fact that even though she found out who killed her mother and brought most of those responsible to justice, the main bad guy still got away.  While the fourth book did not end on a cliffhanger, it definitely left the story open to continue in this fifth book.  This is the closest any of the books in the series have been paired.

One note about the timeline: much like Sue Grafton has done with her alphabet series, which is still set in the 1980s when the first book came out, the Nikki Heat series is now falling behind the present.  Because the books have come out once a year for five years, but all five books have taken place over a little more than a year, the author has fun with the Rook character talking about various fads or toys that have now become commonplace or that have already been forgotten.

The fourth book really established Nikki Heat and journalist Jameson Rook as a real couple, not just people in lust who hook up.  That continues in this fifth book as their shared experiences create an intimacy that Heat never thought she could allow herself to have.  She even allows Rook to interview her for another article since the events of book four were so public and he wanted to make sure her side of the story was told.

Unfortunately, this attracts the attention of a serial killer who has fixated on her.  Viewers of the show will remember a similar storyline for Beckett after the first Nikki Heat book came out.  Now “Richard Castle” is using it for “inspiration” in this book.

A single storyline isn’t enough to keep the reader engaged, though, so while she has this serial killer to deal with Nikki Heat is also still running down leads on the escaped bad guy from book four.  Can she finally catch up to him and get complete closure on the death of her mother?

I mentioned earlier that book five pairs with book four.  In my review of that novel I declared it the best of the series so far.  I would still describe it that way, but book five fleshes it out and makes the sort-of two-parter even better.  It resolves any and all open storylines from the prior book.

As always Deadly Heat had some fun references for people, including ones that are outside both book and show.  The dedication of this book will be recognized by anyone who watches the TV show.

If you liked the first four books, and especially the fourth one, then I definitely recommend this one.  This is really becoming quite a good mystery series.
Posted by Chip Lary at 11:37 AM