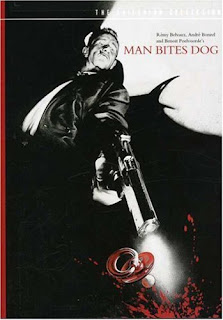 What if a documentary crew had been following the lead character of Alex from A Clockwork Orange around, Spinal Tap mockumentary style?  What if he was even more violent than we thought?  What if he chose to share his innermost thoughts on life, art, culture, and music while simultaneously killing people?  What if he had his own Spinal Tap “” and “lost behind the stage” moments?  What kind of movie would that be?  The answer is Man Bites Dog, an ultraviolent, seriously twisted, dark dark satire on "reality" programming.  I was saying to myself, "I shouldn't be laughing at this."  It’s a movie that is certainly not for the faint of heart.

Man Bites Dog is one of the 1,001 Movies You Must See Before You Die.  The title of this Belgian film was familiar to me, but I knew nothing about it before I watched it.  When it had shakycam shots early on I was dismayed at first because I hate shakycam.  Once I realized that the cameraman, and even the “documentary” crew themselves, were a part of the movie, I became okay with it.

The subject of the “documentary” is Ben (Benoit Poelvoorde), a serial killer.  He is being followed by reporter Remy (Remy Belvaux), cameraman Andre (Andre Bonzel), and a rotating cast of sound engineers, who all seem to have the life expectancy of a Spinal Tap drummer.  Note the use of the same names as the real people, adding a bit to the illusion that this is a real documentary.  All three are the co-writers (with Vincent Tavier, who plays one of the sound men) and co-directors of the film Man Bites Bog, just to add another level of “meta-ness” to the whole thing.

The concept that a documentary crew would even follow a serial killer around, and that he would be happy to have them there, is absurd right out of the gate.  From this we are immediately shown that this is a very biting comment on the state of reality TV and people’s obsession with both the inner lives of strangers, and the criminals in our society.  And this was all done more than 20 years ago before “reality programming” really took off.

We see Ben make a kill and then he proceeds to go through the homes of the people, commenting on their taste in decorating.  At one point he is seriously offended when he finds one of his victims to be the owner of something he considers to be “wrong” – which is coming from a man who just cold bloodedly killed someone.

As the film goes along, the documentary crew starts to blur the line between their subject and themselves.  When one person is getting away a crewmember warns Ben, who is then able to catch and kill him.  A little later they are having problems getting funding and Ben commits a crime to get some cash so that the documentary can continue.  (In a case of life mirroring art Man Bites Dog faced funding problems because of its subject matter.)  Finally, the documentary crew completely erases any line between themselves and Ben when they start to participate.  In addition to being a comment on society, Man Bites Dog is also a biting comment on the state of documentary filmmaking itself, especially the growing tendency at the time to manipulate people and events to better fit into the narrative the documentarian has in mind.  (Something that has only increased in the 20 years since this film was released.)

Some of the humor in the film comes from the extreme dichotomy between Ben’s actions and his other activities.  Watch him play classical music with his girlfriend.  Meet his extended family at a big dinner, during which he kills someone and his family doesn’t even react.  Watch him run into another documentary crew and get jealous of the subject of this other film.  Watch him intentionally scare an old woman into a heart attack and happily note that it saved him a bullet.  There is humor from the crew, too.  Watch as the reporter gives a touching memorial to the first sound man killed, and then see him repeat it almost exactly when the next one is killed – and in both instances the deaths occurred because of his desire to film this serial killer.

All of this may sound horrible to you, and frankly, it is.  That is the whole point of the movie – people’s fascination with the macabre and the entertainment they derive from it.  You definitely have to have a twisted sense of humor to laugh at this film.  I do have one, but even I felt wrong at some of the things that made me laugh…yet I have to admit that I was amused at times by things I never in my life imagined I would find funny.

The film has been censored in various countries, but the Criterion Collection edition of it (for which I have a link below) is the uncut, unedited version of the movie, right down to using the original movie poster image on the DVD cover.  If you dislike violence then you should definitely avoid Man Bites Dog.  For everyone else, I highly recommend this film.