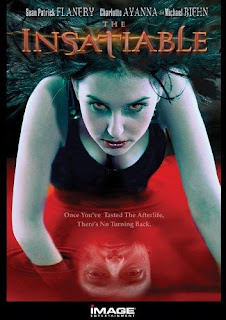 I hesitated on including The Insatiable in my Horror Comedies category.  It is a little more serious than the other films I have reviewed.  While there is humor in it, it is more understated than in movies such as Zombieland.  In addition, the rating for this film on IMDB is only average, which made me wonder if I was not remembering the appeal of this film correctly.  I did something I don’t often do and watched this film again before deciding to write this review.  My re-watch confirmed for me both that I like this film and that it has enough humor in it to be included in the horror comedy category.

I read through the comments on IMDB to try to get a sense for why some people didn’t like it.  The vast majority of those came from an apparently piss poor presentation of the film on the Sci-Fi Channel.  It sounds like it was heavily edited and that they obscured the ending of the film with advertisements for what they were going to be airing next.

I also think that this film surprises people by not being what they expect.  For some people that is a very bad thing.  The Insatiable stars Sean Patrick Flannery, but not as the heartthrob he played in Young Indiana Jones, nor as the badass he played in The Boondock Saints.  Fans of either hoping to see more of the same instead encounter his character of Harry Balbo, a bit of a nerdy schlub who is in a dead end office job and who is constantly badgered by an asshole at work (Jon Huertas – Castle).

It’s a horror movie about a female vampire and it’s titled “The Insatiable”.  This probably meant gorehounds watched it hoping for lots of carnage, while others watched it hoping for some kind of softcore film.  This movie defies those expectations, too.  It has Michael Biehn (The Terminator) in it as Strickland, a vampire hunter.  He’s not a complete badass, either.  He’s a paraplegic in a wheelchair who specializes in tracking them, not killing them.  He also has only a smallish supporting role in the movie. 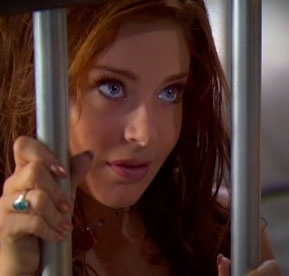 Finally, I also saw one person on IMDB say that the vampire Tatiana, played by Charlotte Ayanna (Training Day, Love the ), was “not that hot”.  Yes, beauty is in the eye of the beholder, but this woman is incredibly beautiful and carries herself with a restrained sexiness that is perfect for the role.  She also has the most intense blue eyes.  Don’t just take my word for it, though.  If you want a second opinion then she won the Miss Teen USA contest as a 16 year old complete amateur – in a $37 evening gown her foster mother bought her, no less – and this was against women who had been doing the pageant circuit their entire lives.  In contrast, her entire life to that point had been spent in and out of foster homes.

So, we’ve got a vampire movie without tons of gore, or sex, or badass vampire hunters, but instead with a more intelligent story than you would expect and an ending that you may not expect.  Toss in little bits of humor and it was a movie that I liked enough to recommend.

So what is the story?  Harry (Flannery) leaves a convenience store having just bought a hotdog for a homeless guy.  When he looks for him, though, he sees a woman savagely attacking the guy in an alley.  When she is spotted she leaps a couple stories through a window and gets away.  She is the “head ripper” killer that the papers have been going on about.  She’s also apparently a vampire.

The cops don’t believe Harry for a second, of course.  They ask how a woman could pull somebody’s head off when even a body builder would struggle to accomplish that.  He insists she is a vampire, so she has the strength, and that she is also smart because pulling the heads off her victims means both that no bite marks on the neck are noticed, and that the authorities are looking for some massive guy.  The cops thank him for this theory and send him on his way.

He tries to research vampires by doing things like watching Nosferatu (1922) and going on the internet.  The only thing he finds is that female vampires are a form of succubus, the demons who appear to men at night and drain them on their life essence.  When he is talking to the same convenience store clerk the next day, and the guy is actually complaining about how his new girlfriend is “draining him dry” in bed this triggers Harry’s interest.  That night he peeks in the clerk’s apartment window and discovers none other than the same woman he saw in the alley.  She spots him, lunges through the window, scratches his face, and tastes his blood.

Harry is seriously freaked out and tries to contact the person who runs a website on vampires.  It turns out the man lives in the same apartment building.  Harry sort of acts as the super in order to get his rent lowered and when he is called to Strickland’s (Biehn) apartment and discovers all the stuff about vampires Harry reveals who he is.  Strickland explains that Harry “is f*cked” because once a vampire has tasted your blood they can follow you to the ends of the Earth.  It’s only a matter of time before they come for you.

Strickland tries to convince Harry to kill the vampire.  Harry’s a milquetoast who would probably have guilty feelings over killing a housefly.  Strickland tells him that he has to if he wants to live, so Harry reluctantly agrees to be Strickland’s vampire killer.  Strickland has been plotting the locations of the “head ripper” kills.  He adds Harry’s information to it and his computer software spits out some probable locations where she might be hiding during the day.  Strickland explains that the software was originally developed to locate serial killers and what is a vampire if not a serial killer.  He goes on to explain that vampires are actually easier to locate than serial killers.  When Harry asks why Strickland says, “Because they rarely drive…and they have to be home before sunrise.”  Strickland explains that he likes to recruit people like Harry because they’ve got nothing to lose.  When asked how often these people succeed, Strickland replies, “Assuming proper attitude, planning, and determination…almost never.”

Harry makes a funny trip to the hardware store buying various tools for breaking into buildings and staking a vampire (which as Strickland explains is just to hold it in place until you cut its head off.)  The hardware clerk barely blinks when Harry asks for “a big knife, you know really big, like maybe a cleaver.”  Harry finally finds the vampire, but can’t bring himself to kill her.  She looks like a beautiful, helpless woman and when she awakens (in her weakened state because of it being daytime) she pleads with him for her life.  Harry can’t go through with it.

He doesn’t want her to keep killing though, so he devises an alternate plan: he will trap her in his apartment building’s basement.  He uses himself as bait and is successful in getting her into a strong cage he has built there.  This is where the movie really becomes interesting.  Tatiana (Ayanna) is very much a caged animal.  She is a tigress, stalking the dimensions of her enclosure – a tigress that is very intelligent and very aware of the appeal she holds for men in general and Harry in particular.  She also knows that he is fascinated with her just for what she is.  She tells him, “I can show you things you’ve never imagined” and you know she means it both sexually and vampirically. 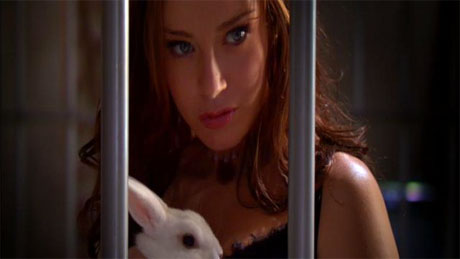 Harry is determined to resist her.  He believes he can appeal to her better nature and get her to stop killing.  She impatiently explains to him that she has to eat to live, just like he does.  If she doesn’t eat she will slowly starve to death in this cage and that he is actually being crueler than if he just killed her outright.  She asks if he has any enemies; she could kill them for him and she could feed.  It would be a win/win.  He mentions the asshole at work and she keeps bringing him up, tempting Harry not just with sexual satisfaction, but also the satisfaction of offing this guy who he hates.

Harry is determined to win her over to his side.  In one amusing scene he orders blood over the internet, heats it to a perfect 98.6 degrees, places it in a soup bowl on a platter, adds a red rose, and brings it all down to her.  She’s not impressed with the romantic gesture.  “It’s dead”, she points out (meaning the blood).  They compromise on him bringing her rabbits to feed off of when what she really needs is live humans.  Don’t worry animal lovers; no rabbits are shown being harmed on screen.

Will Harry win her over, despite the fact that she keeps trying to point out to him that she is who she is and that she cannot change?  Will she instead be the one to win over Harry and get him to start bringing her humans, or at least entice him into her cage to his own probable doom?  It’s a battle of wills.

I mentioned at the top that this film is a little more serious than comedic.  Tatiana has several scenes where she is talking about who and what she is, trying to convince Harry to let her go.  She is neither pure evil, nor pure sexual temptress, nor innocent victim of her needs, but rather a mix of all three.  In addition, Michael Biehn has a good scene where he explains how his character ended up in a wheelchair.

I also said that the humor in this film is a little understated compared to some of the more out and out comedies I have reviewed for this category.  Examples are the chalk outline of a victim in an alley…but with no outline of the head (“head ripper killer”, remember?)  Another is after Harry and Tatiana compromise on rabbits they cut to a scene with Harry at his dead end office job with a post it note attached to his computer monitor that says “pick up rabbit.”  When he does come to her cage with it, she says in a mock romantic voice, “You brought me a bunny.  How sweet.”

Without spoiling who it is or how it happened, at one point Harry does have to dispose of a body.  He heads back to the same hardware store where he bought all the breaking, entering, and cleaving implements and this time buys all the obvious things someone would need to dispose of a body – 55 gallon plastic trashcan, hacksaw, plastic, duct tape, cleaning agents, etc.  As the clerk rings up each one he starts giving Harry a look that says, “I see nothing.  I hear nothing.  Please don’t hurt me.”

Is The Insatiable a vampire movie that will change the world, or even the genre?  No, but it is a fun B movie with a little more depth than you might expect on the nature of a vampire and whether love truly can conquer all.  If this sounds interesting, then I recommend you give it a try.