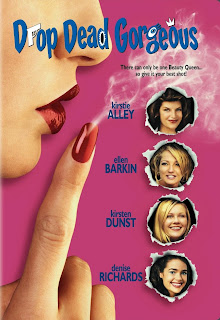 Drop Dead Gorgeous is a mockumentary in the style of This is Spinal Tap, except instead of covering a rock band, this film covers a small town beauty pageant.  Like Spinal Tap everyone in Drop Dead Gorgeous plays it straight – as if the outlandish things that are going on are completely normal.  In and of themselves pageants are funny anyway.  Now add in the small town gossip, rich family/poor family, good girl/bad girl, pervy judges, amateur talent productions, sabotage, death, and much, much more and you’ve got a funny, tongue in cheek comedy.

We meet Gladys Leeman (Kirstie Alley) the wife of the richest man in town, the organizer of the local American Teen Princess pageant, and a former winner herself.  Her daughter Becky (Denise Richards) is the odds on favorite to win this year.  Her main rival is Amber Atkins (Kirsten Dunst), who is as much poor white trash as Becky is a princess.  Amber doesn’t let it get her down, though.  She works multiple jobs, including doing the makeup for the deceased at a local funeral home.  She enjoys the job because she can bring happiness to their families and because she can practice her tap dancing for the pageant at the same time.  She’s the nice girl to Becky’s evil girl.

Amber’s mom (Ellen Barkin) is a full on drinking, smoking, trailer-living stereotype.  When the documentary crew first follows Amber home her mom asks, “Are we on Cops again?”  She loves her daughter, though, and would do anything for her.  She’s best friends with Loretta (Alison Janney) and the two try to guide Amber the best they can.  Sample advice: “If those camera guys ask you to take off your top, get the money up front.”

Also competing in the pageant are Lisa Swenson ( Murphy) and Leslie Miller (Amy Adams).  This is the first film in which I ever saw , and it turns out to have been the first movie she was ever in.  She plays a cheerleader who’s a little dim and a lot hot to trot.  If you’ve only seen her in her more recent sweet and/or serious roles, this is a fun change of pace.  She utters my favorite line in the film.  When Amber’s pageant outfit is stolen Lisa supports her and tells her she’s got to go out on stage anyway (meaning in whatever clothes she can find).  Leslie earnestly responds, “Unh uh.  They won’t let you compete naked.  I already asked.”  I’ve included a set of clips of in this film at the bottom of this post.

As Drop Dead Gorgeous goes along we see many scenes of the competitors preparing for the pageant in their own ways.  The documentarians seem to keep running into one of the judges taping all these girls, too – purely for preparation in his upcoming role as a pageant judge, of course.  Things take a turn for the (mock) tragic, when one of the competitors is involved in a fatal “driving and smoking” accident.  Amber doesn’t believe it was an accident (“yeah, she liked to drive her dad’s thresher, but that was because she said the heavy vibrations helped her think.  I know for a fact that she only smoked after a good drive”), but the local police are satisfied.  Bad things start happening to Amber then, including an explosion at her mom’s trailer.  Gee, I wonder who could be behind all of this.  (One of the running jokes is that it is completely obvious from the “documentary” who is behind it, but that none of the subjects catch a clue.)

If you saw “” above and wondered if they put on heavy Minnah-SOH-ta accents, the answer is “You betcha”.  (, set next door in , had been a big movie just a couple years earlier.)

This movie is not perfect.  You have to buy into the fact that all the people in the “documentary” are real, which some viewers may have a problem with because they are so outlandish.  Denise Richards was in her late 20s when she made this film.  While people that age commonly play teenagers in both movies and TV, when you stand her next to Kirsten Dunst, who really was 17 at the time of filming, it’s obvious Richards is much too old to still be in high school.  And there’s a scene involving vomit near the end of the film that is intentionally over the top.  It is actually pertinent to the story, but I turned my head for a couple seconds while it was happening.

Writer Lona Williams was herself from small town and had competed in pageants.  She was the runner-up in the national Junior Miss pageant.  Because of this she certainly knows the subject matter in the film.  If you like the concept of mockumentaries, and if you are looking for a fun movie, then I recommend you give Drop Dead Gorgeous a try.

Note: the video below contains clips of Amy Adams in Drop Dead Gorgeous.  While there are no major spoilers for the main characters, there are some minor ones for her character.  If you want to avoid even those then stop watching at 1:50 into the video.