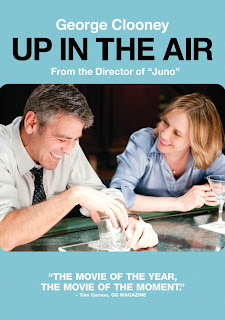 Up in the Air was nominated for six Oscars in 2010, including Best Picture.  Long before I had been working on seeing all the Best Picture nominees in Oscar history I had been trying to see every newly nominated film each year.  Somehow I never got around to seeing Up in the Air back in 2010.  I finally saw it about a year ago and kicked myself for waiting so long because I loved it.  It is both heartfelt and funny, both touching and bittersweet.  I had liked director Ivan Reitman’s prior two films (Thank You for Smoking and Juno) and this one seemed to combine the best elements of both of them.  And Up in the Air also contains what might be George Clooney’s best performance.

In this film he plays Ryan Bingham, a man who is hired to go into companies and lay off people, doing the job that the actual bosses are “too much of a pussy to do” as he says in his opening narration.  He makes no emotional connections with those he fires, but at the same time, he seems to know how to best calm them down while he is doing it.  We soon learn that he isn’t just this way in his professional life, but in his personal life, too.  In fact, he really doesn’t even have a personal life.  He spends a huge portion of the year on the road, flying from one airport to another.  He has packing for trips, going through security, and all the other assorted tasks related to traveling down to a science.  As a sidelight he also gives motivational speeches that use a suitcase as a metaphor for only keeping with you the things you truly need.  Unspoken, but implied, is that Ryan extends that to any human connections, too.

On one trip he meets Alex Goran (Vera Farmiga), a woman that seems to be a female version of him.  She also travels extensively.  They flirt while comparing airline privileges cards, and end up having sex.  They follow it up with expertly checking each others schedules to see when they will next be in the same city so they can hook up again.

Ryan gets a call to come back to the main office of the company he works for.  We see his “home” is pretty much just another hotel room with nothing personal in it.  His boss (Jason Bateman) introduces him to Natalie Keener (Anna Kendrick), a young up and coming star.  She has created a plan to do the firings remotely over the computer.  Ryan is completely against this, probably because it means he will not get to travel extensively like he does today.  He puts Natalie in her place by showing her she is completely unprepared to actually fire someone.  In response the boss sends Ryan back out on the road with Natalie in tow as a sort of mentoring slash trial by fire.

Ryan has to show Natalie how to do even the rudimentary things related to airline travel.  He explains who to get behind and not get behind in the security line.  She accuses him of being racist.  He counters, “I stereotype.  It’s quicker.”  They travel through a succession of cities, Natalie getting her eyes seriously opened when having to deal with people face to face.  She gets to know Ryan better and soon picks up on him not making any connections with people.  She is his polar opposite.  When she sees Ryan and Alex interact one evening she calls him out about defining his relationship with Alex – something Ryan declines to do to her satisfaction.

We see the job taking a toll on Natalie, though.  The constant grief responses from the fired, along with her boyfriend breaking up with her lead her to a bit of a crisis.  Ryan and Alex, with the benefit of more years of experience, are amused (but not in a bad way) by Natalie’s distress about not having a boyfriend.  Despite the fact that she is obviously intelligent and going to be successful she feels she has to have the guy she defined as perfect back when she was a teenager or she will be a failure.  In the DVD extras Reitman says that he worked with his wife on the section where Alex gives life advice to Natalie.  He just asked her “if you could talk to the 22 year old you, what would you say to her” and he then used that to craft both sides of the conversation between the two women in the film.

Whether Natalie finally got through to Ryan, or whether Alex is finally the right woman, we see that Ryan does start to realize how empty his life is.  He likes being around Alex and even asks her to attend his sister’s wedding on the spur of the moment.  She is surprised, but agrees to go with him.  The two seem to make a real connection at the wedding.  How the movie leaves things for Ryan, Alex, and Natalie is neither happy nor sad, but a little of both.  I describe it as bittersweet – a lot like real life.

In addition to Best Picture, the film also received Oscar nominations for Reitman for directing and co-adapting the screenplay from the Walter Kirn novel. (Kirn cameos in the film in the scene where Natalie is first introduced).  And all three of the principal performers received nominations, Clooney for Best Actor and Farmiga and Kendrick for Best Supporting Actress.  Clooney had been nominated a couple times before, but I consider this performance better than any other he had done.  In fact, almost everything that was said about his next nomination for The Descendants (i.e. plays a flawed, vulnerable man) I feel far better describes his performance in Up in the Air.

In regards to Anna Kendrick, she seemed to come out of nowhere with this film.  Teens knew her well for playing a supporting role in the Twilight movies, but I had never heard of her before her nomination, this despite the fact that she was born and brought up here in and was the second youngest person ever to receive a Tony nomination on Broadway.  She actually was shooting this film and the second Twilight movie simultaneously.  Clooney used to tease her about this all the time, that she was slumming it with him in his movie.  Ladies, how would you like to be 23 or so and have George Clooney constantly paying attention to you, but teasing you mercilessly about your far more popular other job that doesn’t involve him?

In his commentary for the film, Reitman says that he literally wrote the part of Natalie for Kendrick, simply from having seen an earlier movie performance of hers in Rocket Science (2007).  He had never met her before and he didn’t tell her this story until after the filming was done because he didn’t want to put too much pressure on her.  If you are interested, here is a singing performance she gave with the Cabaret Kit Kat Girls back in 1998 (she had just turned 13) as part of a “Leading Ladies of Broadway” show: http://www.youtube.com/watch?v=gRYp1ardsNQ

Had I been doing this site back in 2010 I would have had Up in the Air at either first or second on my Top 10 films of the year list.  I like it that much.  Whether you will or not depends on whether you only like seeing Clooney as the charming alpha male and whether you dislike movie relationships that are as complicated as the ones in real life.  While I don’t look for those elements in a movie, they definitely worked for me in this one.  I give this film my highest recommendation.