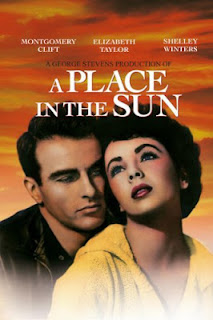 One thing I should mention right off the bat is that although this movie stars a young Elizabeth Taylor, known at the time for her Lassie, Father of the Bride, and National Velvet films, in the Sun is not a happy, lightweight movie.  This was ’s first foray into making serious films and it was also her first real adult role.  Lead actor Montgomery Clift, on the other hand, was already an Oscar-nominated performer.  Clift would receive another nomination for this role – one of nine for the film.  It would win six Oscars in all, including Best Director and Best Screenplay (co-adapted from Theodore Dreiser’s novel An American Tragedy by ’s Harry Brown – future screenwriter of Oceans Eleven).  did not receive a nomination, but co-star Shelley Winters did for playing a woman caught up in a bad situation with Clift’s character.

George Eastman (Clift) is from a poor branch of the rich, powerful Eastman family.  He comes to his uncle (Herbert Heyes), not to ask for a handout, but to simply ask for a job.  His uncle, in order to try to either get rid of him, or at least to let George know “his place” gives him a crappy, low level job in one of his factories.  George doesn’t complain, though, and makes the best of the situation.  It’s easy to do without when you don’t know what you are missing.

George starts dating co-worker Alice Tripp (Winters).  She can only see his last name and the potential dollar signs she figures comes with it.  Even though he tells her that he does not have money, she doesn’t really believe him.  He has manners and carries himself like someone far above his real station.  Even without money he’s much better than any man has ever met.

While dating , George runs into society girl Angela Vickers ().  He is immediately taken with her beauty.  At first she sees him as someone she can toy with, but eventually grows to have feelings for him.  She has him escort her to a series of society parties and George finally starts to realize just how good the other half lives.  The more he experiences the good life, the more he can’t imagine doing without it.  can tell he is slipping away, so she soon has some important news for him: she’s pregnant.

If she expected he would immediately “do the right thing” and marry her, she was mistaken.  He continues to go to parties with Angela, while stalling .  If he had his way, he would marry Angela instead, but her family is still hesitant about him.  He figures he just needs more time.

He tries to convince to get an illegal-at-the-time abortion, but that doesn’t work.  puts more and more pressure on him to marry.  While visiting a lakeside house with Angela, George hears a story about how someone drowned in the lake and his body was never found.  He immediately comes up with a plan to “get rid of his problem” by drowning in the lake.  He seems to have a change of heart, though, and they instead go to the town hall to get married.  Unfortunately, the office is closed for a holiday, so now George is back to his earlier plan.  Can he go through with it or will he change his mind again?

The performances of Clift, and Winters are all top notch.  Each plays a multi-layered character.  They are not just the “evil man”, “innocent girlfriend”, and “scheming rich girl” stereotypes.  Clift plays a man who is good to start, but then starts to succumb to the lure of money.  plays a woman who is used to toying with men, but comes to have real feelings for George.  Winters’ character starts ignorant and naïve, but is more than ready to try to trap George into marriage.  By the way, another key performer in the cast is Raymond Burr.  He was a few years away from his role in Rear Window and a couple more than that from his career-defining role as Perry Mason.  This film gives you an early look at a Mason-like character.

As I said at the top, in the Sun is not a feel good kind of film.  You don’t watch it for sunshine and rainbows.  Instead, you watch it for the performances and to see how each of the three characters has their own struggles with right and wrong and what directions they ultimately decide to take.  If this sounds interesting, then I recommend you give this film a try.