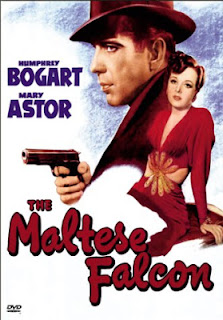 The Maltese Falcon is often named as the first true film noir to come out of .  This is debatable, especially since this story had already been adapted twice before from Dashiell Hammett’s 1930 novel, first in 1931 under the same title and then in 1936 as Satan Met a Lady.  Noir isn’t just about the story, though, but also about the mood and presentation in the film.  Whatever the case, this film proved to be extraordinarily influential on the entire noir genre which would explode onto screens in the 1940s.  In addition to being nominated for a Best Picture Oscar, The Maltese Falcon proved to be very popular with audiences, too.  So much in fact, that the studio decided to put Humphrey Bogart, Sydney Greenstreet, and Peter Lorre together in another film.  The result?  .

I’ve seen words like “convoluted” and “labyrinthine” to describe the plot of the Maltese Falcon.  Suffice it to say, it’s one that you will want to pay attention to in order to follow everything that is happening.

A woman calling herself Miss Wonderly (Mary Astor) hires private detectives Sam Spade (Bogart) and Miles Archer (Jerome Cowan) to follow a man named Floyd Thursby because he supposedly ran off with her little sister.  Archer takes the assignment.  Even though Wonderly projected innocence, Spade says he feels there’s something off about her and her story.  His instincts are right because both Thursby and Archer are killed that night.  The police wonder if Spade killed Thursby in retaliation for his partner being killed.

We wonder some, too, but for a different reason.  Archer’s wife (Gladys George) visits him and asks Spade if he killed her husband so the two of them could be together.  It turns out Spade has been having an affair with his partner’s wife.  Actress Gladys George was born in , but was soon acting on the stage as a child.  She transitioned to making films and received a Best Actress Oscar nomination in 1936 for Valiant is the Word for Carrie.  She received third billing in this film, but her part is not actually that large and the 1940s saw the decline of her career, although she did have a role in the 1946 Best Picture winner The Best Years of Our Lives.

With both the cops and his lover thinking he killed someone, and with finding out that Miss Wonderly gave him a fake name, he knows he could be in some serious trouble.  Wonderly – real name Brigid O’Shaughnessy – establishes contact again.  Spade finds out she never had a sister and she just wanted to find out what Thursby was doing.  She claims to not have had anything to do with the deaths.

Spade gets a visit from Joel Cairo (Peter Lorre) who seems to think that Spade has a “large black bird” in his possession, or knows where it is.  Spade plays along and offers him $5,000 for it.  Spade says he will need time to track it down.  Knowing that this can’t be a coincidence he lets Brigid know about the visit and she is definitely nervous about it.  All three meet and Brigid and definitely know each other.  Spade isn’t sure what they are referring to, but he does get that they are both afraid of “the fat man”.

Being a very popular person, Spade then gets a call from Caspar Gutman (Sydney Greenstreet) – the “fat man” that the other two were worried about.  They meet.  Unlike the others he seems surprisingly willing to tell Spade all about this mysterious bird figurine that everyone is searching for, and offers him $10,000 for it.  The reason for this openness becomes apparent when Spade passes out; Gutman has drugged his drink.  Just then some familiar faces come out of a back room to join Gutman.

There is much more that happens after this, but I will leave it here to avoid any spoilers.  Do watch for an uncredited cameo by writer/director John Huston’s father Walter as a man who comes to Spade’s office after having been shot.

Because John Huston had such a long career it’s sometimes easy to forget that he had to start out like everyone else.  Believe it or not, The Maltese Falcon is the first film he ever directed.  Talk about a hell of a start.  He had been a screenwriter for several years, even receiving an Oscar nomination the year prior for Dr. Ehrlich’s Magic Bullet.  The studio was reluctant to hand this film over to a first time director, but when they got John Huston to agree to also re-write the screenplay for Sergeant York, they handed him the reins to The Maltese Falcon.  He would end up receiving Oscar nominations for his screenplays for both of these films that year.

This movie also featured the screen debut of Greenstreet.  Even though he was over 60, and had been a stage actor for 40 years, he had never appeared on film.  And his film career only spanned 1941 – 1949, yet his presence in the movies, perhaps because of his sheer physical size, seems so much bigger.  He would receive a Best Supporting Actor nomination for this film.

I haven’t spent any time talking about the cinematography which established so much of the noir feel.  There have been shelves of books written on this subject and I can’t hope to convey anything new or interesting in a paragraph.  I will leave it to those other sources to provide much better information to you on that subject.

While The Maltese Falcon did have to change some things to get by the censors it remained a remarkably faithful adaptation of the novel, much more so that the first two films.  It had a “hero” who was definitely flawed and not really a “good guy”.  This was somewhat novel at the time and audiences ate it up.  You should, too.  Unless what I’ve written sounds like something you’d hate, I highly recommend this film.