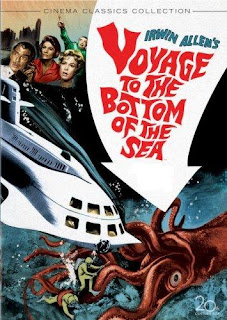 Voyage to the Bottom of the Sea was a big budget disaster flick written, directed, and produced by Irwin Allen.  Allen specialized in these kinds of movies (The Towering Inferno, The Poseidon Adventure, etc.)  He was sort of the Roland Emmerich (The Day After Tomorrow, Godzilla, 2012, etc.) of his day.  At first I had some fun being amused at the outdated machinery and some bad science, but after a while I found myself caught up in the story.  I ended up liking the film and it made me curious about the TV show that spun off from it.

The film stars Walter Pidgeon (Forbidden Planet) as Admiral Harriman Nelson, a brilliant scientist.  With the help of Commodore Lucius Emery (Peter Lorre – M, ) Nelson has built a futuristic submarine.  It is the most advanced one in the world, with nuclear engines and atomic missiles.  (Note – I believe the film is intended to take place 10-15 years in the future from when it was made).

Also on board the boat are Captain Lee Crane (Robert Sterling – The Sundowners), Lieutenant Cathy Connors (Barbara Eden – I Dream of Jeannie), and Lieutenant Danny Romano (Frankie Avalon).  The latter two are there to appeal to the younger audience.

Nelson, under the direction of the United States Oceanographic Society, is taking his submarine for a research trip under the North Pole.  With him are a noted psychiatrist (Joan Fontaine – Rebecca, Suspicion), an unfriendly politician (Howard McNear), and a Vice-Admiral (John Litel).  These guests provide the excuse to show them (and the viewer) through the entire ship.  Everything we are shown will be important at some point in the film, whether it is the mini-sub or the radiation detectors that all of them wear.

Everything is going smoothly at first, but then the sub starts getting pelted with chunks of ice (which somehow manage to sink like stones – don’t ask).  When they surface they find that the sky looks like it is on fire.  Even though they are in the , it is blazing hot out.  They find a survivor on the ice (Michael Ansara – best known to western fans as Cochise and to Star Trek fans as Kang).

When Adm. Nelson gets in touch with he finds that during their trip underwater the Van Allen radiation belt has caught on fire, perhaps as a result of meteorites passing through it.  Because of this the entire Earth is heating up.  If it continues, all life will die.  Being a brilliant scientist, Nelson is needed as soon as possible at a conference to be held at the U.N. to discuss solutions to the issue.

This is a hokey premise, but it’s no more bizarre than neutrinos heating up the Earth’s core in the film 2012.  And at the time Voyage to the Bottom of the Sea was made the belts had only just been discovered.  I’m sure the concept of a “radiation belt” surrounding the Earth was scary to many.  In that respect, it was a good concept for a disaster movie that would attract people’s attention.

During the trip to New York Adm. Nelson and Commodore Emery work night and day on a plan.  They come up with a solution that they believe will work and present it at the U.N. – to disbelief.  Their plan is for Nelson’s sub to travel to a specific point off the and at a specific time launch a nuclear missile into the belt.  The resulting explosion will blow out the fire in the belt much like too much air in a balloon will pop it.  The catch is that Nelson must get approval right away in order to get to the launch window in time to save the Earth.  If the temperature reaches a certain point, all life will die.

Another prominent scientist is horrified.  He feels this explosion will kill everyone on Earth.  His calculations show him that the belt will burn itself out just two degrees below the temperature limit.  He feels that they should just wait and the problem will solve itself.  In order for his plan to work Nelson has to launch his missile before that temperature gets reached, though.  It can only be one plan or the other.  Nelson is shouted down.  He says he doesn’t take his orders from the U.N.; he will only answer to the President.  He makes a run for it and manages to get back to his sub, although he has to dive with U.N. security on deck.

He has the Captain make way for the launch site, even though he doesn’t have authority yet.  During the trip he repeatedly tries to make contact with the President, but the belt is interfering with all communications.  Even tapping into an underwater cable does them no good.  He has to make the decision himself, and he does so.  When his boat reaches the he will launch his missile.

In all the haste the psychiatrist and the survivor end up getting stuck on the sub and are along for the ride.  Soon they start to play a part in what is going on.  Another subplot involves the Captain and Lt. Connors – they are engaged to be married.  Complicating things is that Connors is the Admiral’s assistant, and the Captain and the Admiral start being more and more opposed to each other.

The Captain doesn’t like some of the Admiral’s actions.  When they first picked up the survivor he was babbling about another person.  The Captain orders the sub to turn around to go back to look, but the Admiral overrides that and orders the sub to continue to the U.N. with all possible speed.  Later, the Admiral orders the men to do some things the Captain feels is not correct, like blocking out the news.  Diving with U.N. people on the deck, possibly killing them, also is extremely reckless.

Meanwhile, the psychiatrist is mentioning that the Admiral is starting to show signs of mental illness – his belief that only his plan can save the Earth, a threatening note he received that it turns out was typed on the machine in his office, a fire in his cabin that he believes was an attempt to kill him even though one of his partially smoked cigars was found on the floor.  Is the Admiral losing it?  Combine this with his other actions and the Captain starts to wonder.  Will the Captain mutiny?

Making things even harder for both Admiral and Captain is that the survivor they picked up has had a religious awakening.  He had been a scientific researcher, but his experience on the ice has changed him.  He is convinced that the belt being on fire is God’s plan and anything man does to try to alter it is wrong.  He starts talking with the men, trying to convince them they should just accept the inevitable.

I was confused for a while on whether this submarine was a military sub, or a non-military research sub.  It had ranks, officers, procedures, etc., but at the same time the highest ranking officials are scientists, and military discipline seemed lacking with lower officers questioning orders from higher ranking officers.  I finally decided it was like Star Trek – it was whichever the writers wanted during a particular scene to make it more dramatic.

Looking back on a science fiction film that is more than fifty years old definitely shows you how things have changed.  While it would be easy to laugh at the instrumentation and computers on the submarine, you have to remember that this was extrapolation from state of the art science at the time.  Irwin Allen spent a lot of money building these sets and they were very impressive for the time.  In fact, one of the reasons Allen later did a TV show was to get more use out of the sets.

The other thing I noticed is that this sub must have one hell of an air filter.  There is hardly a scene in the movie where the Admiral is not smoking a cigar or lighting one.  At one point he even mentions going to Stores to get more cigars.  Peter Lorre also smokes cigarettes throughout much of the film.

By the way, any women hoping to see an early, serious portrayal of a female officer with Connors will be disappointed.  Yes she is a Lieutenant, but her job essentially consists of taking notes for the Admiral.  This is also like Star Trek with Lt. Uhura whose job really just consisted of running the switchboard.  I saw other parallels, too.  I think Gene Roddenberry used Voyage to the Bottom of the Sea as some of his basis for the original Star Trek show.

Pidgeon does a good job as the scientist trying to overcome the challenges of politicians, religious fanatics, and pseudo-scientists.  It was also interesting to see Lorre get to play a positive role for once.  I’ve heard that he greatly appreciated the opportunity, too.  and didn’t have much chemistry, even though their characters were engaged.  actually had better chemistry with Ansara, probably because they were husband and wife at the time.  Fontaine does a decent job with her role, and Avalon doesn’t embarrass himself.

As I said up above, this isn’t the kind of movie you watch for scientific accuracy.  It’s one you watch to be entertained.  There are some decent thrills with undersea dangers (like a giant squid) and some tension with the whole “is the Admiral losing it and what will the Captain do” plotline.  Submarine movies seem to invite plots about going crazy from being cooped up.

The sets are quite expansive on this submarine, though.  They are actually based on some of the design of the first nuclear submarine, including a spiral staircase between two levels, so they are not as unrealistic as they may look.

If you can get past the “that can’t really happen” aspect of most disaster movies, then I recommend you give this film a try.  You may end up liking it.