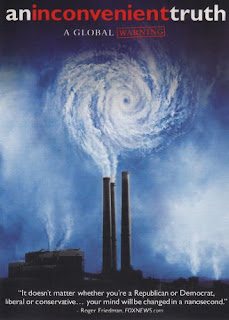 Back in the late 1980s and 1990s I had a subscription to Discover – a science magazine.  One of the occasional contributing writers was a Senator named Al Gore.  Prior to this the only thing I knew about him was that he had let his wife run a Senate “investigation” into objectionable (to her) lyrics in music.  Needless to say, the fact that the man actually had a good mind for science, and knew of its importance to our future, did a lot to restore my bad opinion of him.  I can’t honestly remember if any of his articles focused on global warming, but it would not surprise me.  Watching the documentary An Inconvenient Truth reminded me of how focused on science Gore had been before becoming the Vice-President of the in 1992.
In case you are wondering, I am not going to get into the politics driving the pro-Gore and anti-Gore sentiments regarding this film.  As he himself says, this is not a political issue; it is a human issue.  Some people are incapable of seeing anything except through the lens of their own political beliefs, though, especially when a former politician is front and center, hence some of the strong reactions to this film from the fringes.  If you are interested in knowing more about some of the positive and negative reactions, you can find that here.

An Inconvenient Truth shows major parts of a presentation that Gore had been giving for a few years since losing his bid for the Presidency in 2000.  He had been tweaking it and refining it over that time to include the latest findings.  While everything he presents was the best available information at the time, in the six years since new discoveries have been made.  Also, giving the timing of this film there is a section of it that concentrates on the effects of Hurricane Katrina on .  Now being more removed from the disaster these scenes feel a little gratuitous.
Gore had been giving this presentation to big audiences and small, to companies and governments, to towns, cities, states, and even countries.  There are a ton of extras on the DVD that go into more detail about the preparation and set up of this particular presentation.  They filmed it on at least two different nights because there are transitions during the film that show small changes.  There was a small audience there to provide the human feedback both for Gore and for the viewer.  Just having Gore talk directly to the camera for an hour and a half would not have worked.
I went into this thinking it was likely going to be boring, not because it was a documentary, but because it was Al Gore.  For those outside the , or who are not old enough to remember, Gore’s reputation was that he was very dull and wooden.  His political speeches were not the most stimulating ones around.  It’s one of the things that might have cost him the election.  I was very pleasantly surprised to find that when he was not giving political speeches, but instead talking about something he was passionate about, he was quite engaging.  He even opens with a joke about being the “former ‘next President of the ’.”
Director Davis Guggenheim was probably concerned about the same thing, though, because he cuts away from the presentation at several points to show a little about Gore the man.  He has Gore traveling back to his home, talking about things that happened when he was a boy, as well as stories from raising his own children.  Gore talks about how when he was in college he first got his eyes opened up to the possibilities of global warming by a professor who had been researching it since the 1950s.  He relates a funny story about how when he was a naïve, first term Senator in the late 1970s he thought once he laid out all the evidence for his peers they would overwhelmingly do something about it (which, of course, never happened.)
The thing is, during these asides I found myself missing the presentation a little.  There are another 20-30 minutes of it in the deleted scenes on the DVD that didn’t make it into the film.  I actually wish they had kept the presentation whole and skipped most of the “human interest” segments.
Science has always been important to me. (When I was little I knew I was going to be an astronaut some day).  It’s always bothered me that science is often mischaracterized in the media and politics, either intentionally or unintentionally.  I felt Gore did a very good job of presenting scientific principles and evidence in the film without going over too many people’s heads.  He showed he could communicate the findings without confusing most people.
If you don’t believe global warming is real, will this film convince you?  Not if you are one of the people who are blinded by their politics.  If you simply haven’t seen enough evidence yet, then it just might.  At the very least it will give you many things to consider.  Michael Shermer, founder of The Skeptics Society, wrote in Scientific American that this film had “shocked me out of my doubting stance.”  I loaned this movie to a friend who had only heard about it via the bashing of it.  I pointed out that he should at least see the actual film to see what his own opinion of it would be.  He agreed.  I can’t say that he became “a believer”, but he definitely had more respect for the film after he watched it.
Personally, I had little doubt about global warming even before I saw An Inconvenient Truth.  That doesn’t mean that I was worried about it.  I hadn’t really given it much thought at all.  It just seemed to me that some super rich people might lose their oceanfront mansions, but so what?  This doc showed me that there are a lot more consequences that just ocean levels rising.  The one that made the biggest impression on me was the effect it would have on the spread of disease, and on the sheer number of people it would displace.
This film won the Oscar for Best Documentary.  It also did something no other doc had ever done – it won a second Oscar.  In this case it was for Melissa Etheridge’s original song “I Need to Wake Up”.  She was shown an advance copy of the film and was so impacted by it that she immediately sat down and wrote this song.  She then took it to the director and he used it in the closing credits.  The movie also proved popular with audiences.  It became one of the highest grossing documentaries in history.
If you’ve never seen this film, I highly recommend you watch it – not so you can be convinced (especially if you don’t want to be), but to at least give you some things to consider regarding the issue.  At the very least, you will be able to have an informed opinion on it.
Chip’s Rating: 4 out of 5 stars