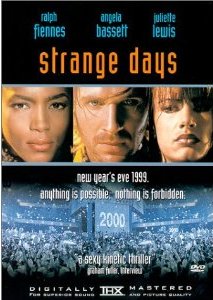 Strange Days is a near-future science fiction movie that didn’t get a lot of notice at the time it was released, even though it was written by James Cameron and starred Ralph Fiennes who was coming off his Oscar nomination for Schindler’s List.  It was directed by Cameron’s ex-wife Kathryn Bigelow.  After her Best Director Oscar win for The Hurt Locker people started re-discovering some of her earlier films, including this one.  In my opinion, Strange Days is the best film Bigelow made prior to The Hurt Locker, although I’d listen to the Near Dark (1987) fans who might disagree with me.

Strange Days is set in the last days of 1999 leading up to the “new millennium”.  The filmmakers made the same mistake the media did a few years after the film came out – the new millennium did not start until 2001.  Never let the facts get in the way of a good story, either in a movie or in the media.  In these final days of 1999 mass hysteria is going on in as “the end” approaches, and the police can barely maintain order.

Ralph Fiennes stars as Lenny Nero, a former police officer who now buys and sells illegal SQUID recordings.  Technology exists that allows people to record their experiences – sight, sound, touch, etc. – via a device (the SQUID) they wear on their head.  These recordings can then be played by others wearing a similar device.  The result is that the viewer literally experiences everything the original person did.  It’s supposed to only be for the military, but the tech leaked out.  Even though it’s illegal to use these devices, they are relatively widespread.  Lenny doesn’t lack for customers.

By the way, James Cameron once again took one of his science fiction stories from a prior work, in this case Mick Farren’s 1978 novel The Feelies, which was put back into print in 1990.  Like all the others except for Dark Angel, which is an exact copy of Robert Heinlein’s novel Friday, Cameron changed just enough so that there is no legal need to credit the original author.  In the novel “feelies” were the next evolution in movies – “movies” had motion; “talkies” had sound; and “feelies” had the other senses.  The 1978 novel also has a subplot about a woman who competes in a televised competition designed to degrade the competitors, all for the entertainment of the masses.  Sound familiar?

As you can imagine, dealing in black market SQUID recordings sometimes gets Lenny into situations where things go wrong.  In this case a woman (Bridget Bako) witnesses two police officers (Vincent D’Onofrio and William Fichtner) murder a rapper.  She was wearing a SQUID so there is a recording of what she saw.  She is trying to flee from the cops, and she runs across Lenny.  She leaves the copy of her recording with him, but he cannot retrieve it at first.  He then gets sent a second recording – of this woman being raped and murdered.

Lenny shares this info with two friends – “Mace” (Angela Bassett), who works as a bodyguard, and Max (Tom Sizemore), a private investigator.  They try to figure out what to do with the recording.  Mace is all for turning it over.  She believes in the straight and narrow and doesn’t really like what Lenny does for a living in the first place.  She’s got feelings for him and doesn’t want to see him get hurt.  Lenny, however, is somewhat obsessed with his former girlfriend Faith (Juliette Lewis), who is a singer.  (fyi – Lewis did all her own singing in the film.)

Max counsels Lenny to not reveal the recording.  Things are already close to exploding in the city.  If it were to come out that two white cops murdered a black rapper, Max feels that all hell would break loose and many more people would die.  As you might expect, there is far more to the story than just these events, so regardless of what Lenny decides, it’s going to get a lot more complicated and dangerous for him as the movie goes on.

The movie features a number of POV shots, as you would expect when it deals with a technology that actually allows you to relive the experiences of someone else.  The movie opens with one of these and even though it was over 15 years ago when I first saw it I still remember both my friend and I reacting strongly when a particular thing happened at the end of this first scene.

The filmmakers literally had to invent a new camera to allow them to shoot the POV footage.  It took upwards of a year to get the camera ready and to plan out the shots.  As I mentioned at the top, the movie seemed to get lost in the shuffle when it first came out, so combined with the production costs it ended up losing quite a bit of money.

Part of the reason it didn’t do as well is that it is science fiction (SF), not sci-fi.  It’s not filled with aliens, spaceships, or lots of special effects.  Like other SF movies it’s actually about something.  The science fiction aspect is there to enhance and progress the story.  Unlike sci-fi movies, it’s not designed to distract you from the fact that there is little to no plot.  (I wrote some thoughts on the difference between SF and sci-fi in my Before Star Wars post.  You can read it here.)

As you would expect, Fiennes and Bassett both do great jobs with their characters.  Sizemore does his patented tough guy.  Lewis gets to rock out and act a little deranged.  It looked like she was having fun.  Bigelow showed that Point Break wasn’t a fluke and that was wrong about a woman not being able to direct a film with action sequences in it.

Trivia #1 – James Cameron actually did quite a bit of editing on this film, but had to go uncredited because he was not in the Editor’s union.

If you have never seen Strange Days, then I recommend that you give it a try.  It is an entertaining film and has a good mystery/thriller plot to it, with science fiction elements.  The POV cinematography is quite something to see, as well.